Home Features What Is Truth in a Wiki World? 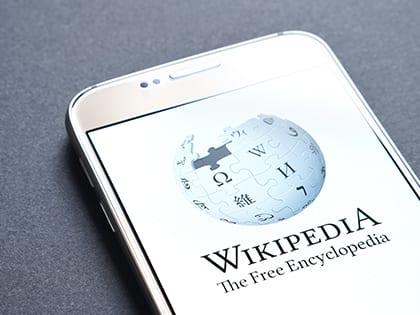 How can we define truth in a culture that has democratized it, i.e., truth is based on the opinion of the majority?

Wikipedia, the online encyclopedia, continues to be a popular website and is written almost entirely by unpaid volunteers. Though once praised for “democratizing knowledge” by such luminaries as Stanford University law professor Lawrence Lessig, Wikipedia has more than its fair share of detractors. Numerous scholars continue to voice concern that the encyclopedia is an unreliable research tool and lament students’ use of the resource. A paper by a University of California at Merced graduate student revealed many of Wikipedia’s flaws, including often indifferent prose and some serious problems with accuracy.

Yet it seems Wikipedia is here to stay. The English-language version of the encyclopedia surpasses 5 million articles, there are more than 40 million articles across all languages and it is consistently one of the internet’s 20 most popular destinations.

Regardless of the accuracy of certain articles, Stephen Colbert once put his finger on the real issue in his play off of the word reality. Wikiality is defined as “reality as determined by majority vote,” such as when astronomers voted Pluto off their list of planets. Colbert notes that with Wikipedia, any user can sign on and make a change on any entry and, if enough users agree, it becomes true. Colbert muses about a wikiality where this could apply to the entire body of human knowledge. “Together we can create a reality we can all agree on. The reality we just agreed on.” So through a new wikiality, we can take our collective “truthiness” (another term coined by Colbert) and make it fact for all through majority vote.

From Outreach Magazine  10 Statements That Get Church Leaders Into Trouble

This is reflected comically in the movie Talladega Nights during a prayer before family dinner led by race-car driver Ricky Bobby (played by Will Ferrell), who decides he wants to pray to Jesus as a baby. This opens the door to an interesting theological discussion between Ricky Bobby; his two sons; his wife, Carley; her father; and Ricky Bobby’s best friend Cal:

Ricky Bobby: Dear Tiny Infant Jesus—
Carley: Hey, umm, you know sweetie, Jesus did grow up. You don’t always have to call him “baby.” It’s a bit odd and off-putting, praying to a baby.
Ricky Bobby: I like the Christmas Jesus best and I’m saying grace. When you’re saying grace, you can say it to grown-up Jesus, or teenage Jesus, or bearded Jesus or whoever you want.
(Returning to his prayer): … Dear Tiny Jesus, with your golden-fleeced diapers, with your tiny little fat balled up fists—
Carley’s father: He was a man; he had a beard!
Ricky Bobby: Look, I like the baby version the best. Do you hear me? I win the races and I get the money …
Cal: I like to picture Jesus in a tuxedo t-shirt, ’cause it says, like, I want to be formal, but I’m here to party, too. ‘Cause I like to party, so I like my Jesus to party.
Walker (son): I like to picture Jesus as a ninja fightin’ off evil Samurai.
Cal: I like to think of Jesus with, like, with giant eagles’ wings singin’ lead vocals for Lynyrd Skynyrd with, like, an angel band …
Ricky Bobby (continuing to pray): Dear 8-pound 6-ounce, newborn infant Jesus, don’t even know a word yet … thank you for all your power and your grace, dear baby God. Amen.

Such pick-and-choose approaches to truth are not without their cultural critics. Consider Malcom Gladwell, author of David and Goliath and bestselling titles such as The Tipping Point, Blink and Outliers. His approach has been to popularize various research projects and draw counterintuitive conclusions.

From Outreach Magazine  A New Name, a New Identity, a New Life

Now, I am a fan of Gladwell and find that his writings offer interesting challenges to conventional wisdom. Yet reviews of his work point out that the research he reveals is often small, unverified or contradicted by larger and more established studies. Further, the conclusions he draws as the “only” conclusion are far from it.

For example, he writes how a disproportionate number of eminent people lost a parent in childhood, and he draws the conclusion that such adversity strengthens someone for success. Yet in another section, Gladwell notes that prisoners are also far more likely than the general population to have suffered that blow as children. So which is it? Do early wounds create winners, except when they don’t? In the Wall Street Journal, journalist Christopher Chabris reviewed Gladwell’s work commenting that his approach involves telling “just-so stories and cherry-picking science to back them” and starting off with “the fallacy of the unexamined premise.” More to the point, what “he presents are mostly just intriguing possibilities and musings about human behavior, but what his publisher sells them as—and what his readers may incorrectly take them for—are lawful, casual rules that explain how the world really works.”

It’s a wiki approach, to be sure, which may be why it’s made him one of the biggest selling authors of nonfiction in the Western world.

After all, it’s a wiki world.

Adapted from The Rise of the Nones by James Emery White, Baker Books, a division of Baker Publishing Group, Copyright 2014. Used by permission. BakerPublishingGroup.com