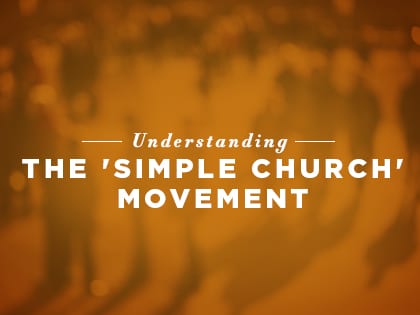 Ed Stetzer & Daniel Im: “What defines simple churches is not location but emphasis.”

The term “simple church” is birthed out of frustration. We need to describe this phenomenon often called “house church,” but all people in this movement do not like being identified by a “house.” They point out that these churches do not meet just in houses; they also meet in restaurants, businesses, or other settings. What defines simple churches is not location but emphasis.

We want to describe a certain kind of house church; however, Daniel and I do want to describe accurately what this movement does. Thus, we are going to most often use the term “simple church.” Essentially the term “simple church” describes churches that emphasize a common life in Christ. This is achieved theoretically by prioritizing certain values and practically by limiting group size. Simple churches also tend to function completely by face-to-face relationship. If everyone cannot be “in common,” the church is no longer a simple church. Robert Banks explains:

[Simple church] involves face-to-face meeting of adults and children who are committed to developing a common life in Christ. They meet weekly in a house, apartment, or other convivial space. More important than the setting is their mutual care for and accountability to one another. As an extended Christian family they desire to sing, pray, learn, share, love, play, and have a meal (which is also their Lord’s supper) together. Through their mutual ministry to one another they learn to identify and use the gifts God had given them and they are therefore more confident in engaging in mission through various individual ministries in their homes, neighborhoods, work places, and wider communities. While they view themselves as church they also recognize the importance of congregating regularly with a larger group of God’s people.

Simple churches have prioritized face-to-face relationships and common life to such a degree that their fellowships take forms that are significantly different from traditional churches. Their commitment to community is impressive in that they intentionally limit group size so that members cannot be a part of the church without being truly connected with the church members.

Until recently the concept of simple church in the West was relegated to the back burner in the church world. Yet this continues to be the method God uses in most parts of the world to expand his kingdom rapidly (China is a great example, with estimates of more than tens of millions of “underground” Christians meeting in house churches). Simple-church proponents in the West, however, have often been painted as “disgruntled” Christians who are pulling out of established churches or as groups that quickly become ingrown.

Simple churches have been an intriguing, though limited, experiment among Christians in the West—with little success in the past for sustaining a movement of this simple strategy. But the phenomenon seems to be picking up some steam and even caught the attention of The New York Times years ago: “A growing number of Christians across the country are choosing a do-it-yourself worship experience in what they call a ‘house church.’” And that number (we think) is still growing.

Throughout history Christians have tended to meet in larger and larger groups under more highly trained leaders when they have the freedom and ability to do so. This is the law of complexity in organization, and the church is not an exception. When the church enters new territory, it is simple, but as the church grows and with the passage of time, the church becomes more complex with programs, property ownership, paid staff, etc.

Some factors may keep a church from becoming complex. For example, when a government restricts the use of buildings, the church thrives in homes, as it has in China. Or when church buildings are out of the question because of economic factors, the church can thrive by meeting under trees in a village. But when it has been possible to gather in larger groups, Christians have historically done so.

Still we pay a price for all of our systems, protocols, and programs. J.D. Payne sums it up best when he says:

If the first century disciples approached disciple making and church planting with the complexity we have in the West, the gospel would have never left the Middle East. We want to reach the world with the extraordinary working through complexity. But what if the way to reach the nations is not through such means? What if in our Father’s economy the primary way to accomplish the extraordinary is through the simple and ordinary?

Although no factors in the United States exist to force a simple church model, some Christians have promoted the simple church as a viable alternative. One book written in 1972 explained, “It was after this first year as a congregation that some of us discovered, to our surprise, that groups elsewhere called themselves House Churches. Through our reading we were discovering, too, that the House Church had appeared in the early life of the church. The importance of its historical roots and its contemporary emergence slowly dawned upon us.”

Some are calling for the “third reformation” that will restore the New Testament church structure:

In rediscovering the gospel of salvation by faith and grace alone, Luther started to reform the Church through a reformation of theology. In the 18th century through movements like the Moravians there was a recovery of a new intimacy with God, which led to a reformation of spirituality, the Second Reformation. Now God is touching the wineskins themselves, initiating a Third Reformation, a reformation of structure.

Many feel that this expression of church will lead to a great movement of the Holy Spirit: “A new wind is stirring in the land! A mere zephyr, but we expect it to become a hurricane which will alter the landscape of Christendom. The wind is the Spirit, who in our time is again doing new things. He is bringing renewal and transformation to the individual and corporate lives of His people, His church.”

Many people have advocated that the traditional church abandon its buildings and embrace the relational nature of the simple church, but before now this has not caught on in the North American church world. Simple-church adherents may consider it a failure of the church, but Christians and the unchurched generally have not chosen to worship in small house churches. Signs indicate, though, that pattern may be changing.