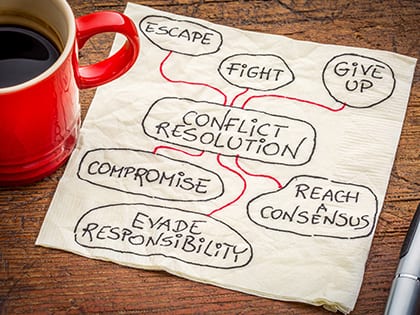 Making an effort to resolve relational conflict is never easy, but here are some biblical steps to prepare your heart beforehand.

In Jesus’ Sermon on the Mount in Matthew 7, he forcefully deals with a judgmental spirit which often gets in the way of resolving conflict. Often when we try to resolve conflict it doesn’t go well because we’ve not prepared our heart beforehand. I’ve found these five benchmarks crucial to prepare my heart before I attempt to resolve a relational conflict.

1. ATTITUDE: I have a constructive one.

When Jesus tells us in Matthew 7:1 to not judge, he’s not prohibiting what judges do in the court room nor saying we can’t call sin sin. Neither is he saying that we should never confront another about their unhealthy or destructive behavior. Rather, He’s speaking against what we’d call a judgmental, morally superior, or hypercritical spirit that He often saw in the scribes and Pharisees. Before we deal with a conflict, we must examine our attitude to make sure our goals for doing so are constructive and corrective rather than critical and condemning.

Sometimes a judgmental spirit shows up in a subtle way when we take delight in the misfortune of others. The Germans coined a word for this experience, schadenfreude (shod-en-froid-a). When we take delight in another’s misfortune, our brain actually releases dopamine, one of the feel-good neurotransmitters, into our brain’s pleasure center. So, the next time you take subtle delight in the misfortune of the person with whom you face conflict, you’re probably doing what Jesus said we should avoid.

In verse 2, Jesus says, “For in the same way you judge others, you will be judged, and with the measure you use, it will be measured to you.” This is another way of explaining how the golden rule works. What goes around, comes around. The attitude or standard we use against others will be the same attitude others will judge us by. This passage seems also to imply that God Himself will apply that same standard against us. As John McArthur writes, “Self-righteous judgment will become its own gallows.”

From Outreach Magazine  7 Reasons Evangelism Has Declined in the Church

Before we attempt to resolve a conflict, we must check the standard of fairness we’re applying that we hope the other person will apply with us.

Jesus used an exaggerated metaphor of a guy trying to take the speck out of another’s eye when he himself had a log sticking out of his own eye. He was illustrating that as ludicrous as that image appears, it’s just as ridiculous to be judgmental and picky toward somebody with whom we have a conflict when we have not faced up to our own sin and responsibility in the conflict. So, we must first look within. Otherwise, we can become so obsessed with the other person’s issues that we miss the really big stuff in us.

The next benchmark is a close cousin to this one.

4. RESPONSIBILITY: I’ve owned my part in the conflict.

In verse 5, Jesus says that we must first take the plank out of our own eye. In other words, before we can address another’s contribution to the conflict, we must own what we’ve done that has contributed to the conflict.

Jesus even includes the concept in one of the beatitudes where he says, “Blessed are those who mourn, for they will be comforted” (Matt. 5:4). He looks with favor on genuine repentance.

When we do this we then become qualified to attempt reconciliation, “… and then you will see clearly to remove the speck from your brother’s eye” (Matt. 7:5).

In verse 6 Jesus says, “Do not give dogs what is sacred; do not throw your pearls to pigs. If you do, they may trample them under their feet, and then turn and tear you to pieces.”

The dogs and pigs He refers to are not cute puppies nor pet potbelly pigs. They represent mangy, wild dogs and pigs that would just as soon rip you apart as anything. Jesus uses an exaggerated picture of a man holding precious pearls trying to convince the dogs and pigs that his pearls are valuable. Doing so is fruitless because such animals only care about getting food and would rip you into pieces were you to get in their way. Pigs and dogs don’t appreciate valuable things.

From Outreach Magazine  5 Beautiful Things About the Church

Here’s his point. It may not be worth the price to attempt reconciliation. It may be better to yield your rights that you are morally and legally justified to receive. It may be the wisest choice not to confront. For by doing so, you may simply make things worse. Some people will reject you no matter how well-meaning you are, how concerned you are for them, or how well you prepared your heart. With such people, don’t force the issue. Practice discernment and count the cost.

Resolving conflict is never easy. But the chances of successful resolution increase when we appropriately prepare our heart.

How have you prepared your heart before attempting to resolve a conflict?