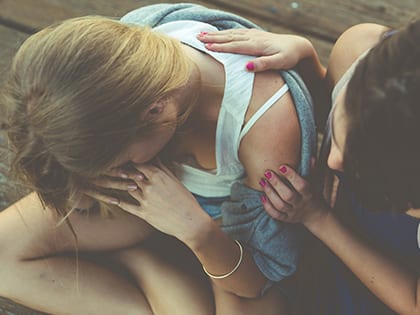 “The church is for the broken. A church without the broken is a broken church.”

For many around the world, mental illness is a not just a theoretical issue. Instead, it plays itself out in many ways and can impact nearly every moment of every day. For some, the struggle is manageable; although disruptive, they are still able to function at near normal capacity.

Others, however, have a very different experience. I had an aunt who struggled with mental illness and, tragically, took her own life. Unfortunately, knowing someone who takes his or her own life as a result of mental illness is not that uncommon.

Two studies were recently conducted by LifeWay Research, one that focused on churchgoer views regarding suicide and the second on pastor views. Both studies were sponsored by the American Association of Christian Counselors, the Liberty University Graduate Counseling program, the Liberty University School of Medicine and the Executive Committee of the Southern Baptist Convention.

The studies found that 55 percent of churchgoers say they hear about a suicide in their local community nearly once per year, and 32 percent have had a close family member or acquaintance take his or her own life.

Churches Have a Role

According to these studies, 76 percent of churchgoers agree that suicide is a problem that needs to be proactively addressed in their local communities and 84 percent agree churches have a responsibility to provide resources and support to individuals with mental illness and their families. Overwhelmingly, churchgoers agree that suicide and mental health need to be addressed and that the church has a responsibility to be a leading voice in the conversation.

This is antithetical to how the church should function relationally—our churches should always be places of safety and community for those wrestling with any issue, especially those involving mental health.

Sadly, very few people at risk of suicide are talking to their church communities about their personal struggles. Additionally, only 14 percent of churchgoers reported their church had provided training and resources for ministry leaders to be able to even identify signs of someone at risk of committing suicide in the past year.

There could be a multitude of reasons for both of these findings, but we as the church and Christians must be more intentional and proactive regarding prevention. Let me throw out a few more stats before we look at where to go from here.

Churches are much more likely to respond after a suicide has already occurred. At the time of their loved one’s death, churchgoers said their local churches responded to their families by praying with them (49 percent), attending the visitation or funeral (43 percent), visiting their families (41 percent), sending cards (32 percent), providing meals (31 percent) and staying in touch after the funeral (30 percent).

These are good ways to minister to hurting families, but notice two things: 1) These percentages are still very low compared to what should be happening, and 2) there is certainly more involvement after than before, and we should definitely be doing more. Specifically, what are some ways for churches to help lower the number of suicides in their communities?

The research shows that 65 percent of pastors speak to their churches in sermons or large group messages about mental illness once a year, rarely or never—another 26 percent only speak about it several times a year.

Sermons break stigmas. When pastors are willing to talk publicly about mental illness, they take away some of the shame associated with these conditions. Churches need to be much more willing to acknowledge and destigmatize the presence of mental health issues in their faith communities.

If churches are already making an attempt to destigmatize mental illness, it may be wise for them to consider changing their approach. The current strategies have proven to be ineffective: 55 percent of churchgoers agree people are more likely to gossip about a suicide than reach out to the family in support. This finding should grieve us and highlight the work we still have to do.

Seek Out the Hurting

Churches should also seek out those who are hurting and offer their time and resources to help. Some specific ways church leaders can support their neighbors who have a mental illness are to ask good questions and let people share their stories. We should always be quick to listen instead of offering judgment. Ultimately, churches need to be generous with their time and resources, even when it is not easy or necessarily convenient.

Churches need to be persistent in times of pain. It is important for both church leaders and members to continue pursuing relationships even when they are difficult. Research shows that 49 percent of churchgoers who have had a close family member or acquaintance take his or her own life agree that their loved one had withdrawn from most relationships.

Unfortunately, in most congregations today you can disappear fairly easily. Many churches are based more on a consumer model where a group of customers gather together for religious goods and services. When a person disappears from your midst, you probably will not be concerned (if you even notice) because you assume he or she is just attending another church.

This opens up gaps into which many hurting people fall. We should be conscious of this reality and care enough about each member to stop and ask, “Hey, where is so-and-so?” This is the hard, but important, work of ministry and community. We cannot take the easy road and only care about the happy, easygoing people who continue to choose to attend our services and do not withdraw from their relationships. The church is for the broken. A church without the broken is a broken church.

From Outreach Magazine  How Churches Are Different Than Cafeterias

Some, But We Need More

Studies have revealed that churches are helping some people who are struggling with mental illness: 53 percent of individuals with acute mental illness said their churches have been supportive; and among individuals with acute mental illness who attended church regularly as an adult, 67 percent said their churches have been supportive. Since people self-select their places of worship, one would expect that they would choose a supportive community. However, even with taking this into account, it is an encouragement to see the faith community has been a place of support for those struggling with mental illness. Churchgoers also reported a variety of support activities that were conducted at their churches in the last year.

Among the most conducted were: “Taught youth the biblical truth that each person has unique value to God” (48 percent) and “encouraged the congregation to continue supporting friends and family who have lost someone to suicide” (31 percent). While these are good, we need more. We, as Christians, need to intentionally lean in to prevent those who are hurting from falling through the cracks.

Churches could use their facilities to host training seminars to better equip members on how to identify and be a friend to those with mental illness. This does not require church leaders to have a Ph.D. in Clinical Psychology. It simply means pastors must be intentional about equipping their members to be good neighbors, locate helpful resources and promote participation among the congregation.

Both Christian and other suicide prevention resources are available to help equip us to minister to those with mental illness. A simple, yet effective, method of training is helping Christians identify warning signs. Some studies show that many of those who commit suicide talk to at least one person about the desire to end their lives. Equipping people to listen for, and respond appropriately to, suicide talk can greatly reduce the risk of the suicidal person being successful in committing suicide.

Overall, our call as Christians in the midst of a suicide crisis comes from Jesus. When Jesus saw hurting people, he drew close to them, cared for them and sent his disciples to care for them. Our call, then, is clear. We must seek out the broken even when it is messy and difficult. The church without the broken is a broken church. We are the agents of ministry led by the Holy Spirit to share the love of Jesus with the hurting and point them to a Savior who loves them dearly.

I will be addressing this topic and more at the American Association of Christian Counselors National Conference on September 28 in Dallas, Texas.