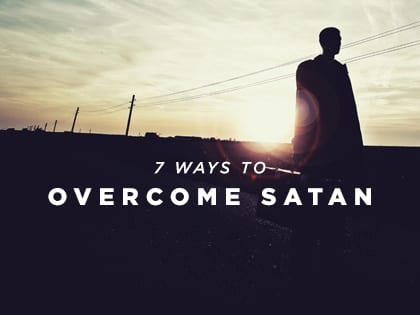 “When we boldly ask much of God for his kingdom, we put the gospel to action and overcome Satan with our faith.”

The Bible makes it clear: We’re in a battle. It’s a battle we can’t escape with an Enemy we can’t see. As long as we confess Jesus as Lord and have the Spirit of God within us, Satan will do everything he can to destroy our faith. That’s why we’re told to “stand firm” against his schemes (Eph. 6:13).

So how do we fight? How do we overcome Satan’s attacks?

At the end of his letter to the Ephesians, Paul lists out seven pieces of spiritual armor for us to take up in the battle against Satan. As a kid, I thought the spiritual armor were these mysterious weapons used to ward off demons, like magic amulets or Harry Potter spells. But I’ve come to learn that when Paul talks about the spiritual armor, he’s simply giving us ways to apply the gospel to our lives. Putting on the armor of God is another way of saying we should clothe ourselves in the gospel.

Just as a soldier’s entire body is covered with armor, so should the gospel cover our entire lives. The gospel is your greatest defense against Satan, because where the gospel has fortified you, Satan cannot attack you.

Cover your life in the gospel–and overcome Satan himself–with these seven pieces of armor:

1. Stand firm in your identity in Christ.

Whatever controls your heart also controls your identity. Once Christ is the center of who you are, then you have an identity that Satan can’t shake.

Next, Paul says, “Take up … the breastplate of righteousness” (Eph. 6:14). Similar to the first piece, this means embracing our identity in Christ. Putting on Christ’s righteousness means believing that when God looks at us, he sees Jesus’ perfect record in our place.

But this is also referring to obedience. Because we are covered in Christ’s righteousness, we conform our lives to Christ’s righteousness. Satan’s focal point of attack will be whatever part of you isn’t surrendered to God and conformed to his truth. This may be a sinful habit, a bad relationship you won’t let go of, or just an area of your life that you haven’t put under God’s control.

From Outreach Magazine  How to Best Pray for the Global Church

Wherever you close yourself off to obedience, you leave an open door for Satan. But once you put off the sin you’re holding to, then you can put on the righteousness of Christ and be guarded against Satan’s attack.

3. Preach the gospel to others.

Paul continues, “As shoes for your feet, having put on the readiness given by the gospel of peace” (Eph. 6:15).

I’ve often heard that the sword of the Spirit is the only offensive weapon in the Christian arsenal. That’s simply not true. Your feet are offensive weapons, too, because they carry you into battle. Paul says we overcome Satan by going on the offensive with the gospel.

As long as Satan can keep us from sharing the gospel, our neighbors will be under his power (Eph. 2:1). But once they hear the good news, then they can become children of God under his grace. What better way to fight against the darkness of Satan than to preach the gospel of light?

4. Preach the gospel to yourself.

The fourth piece of armor is “the shield of faith, by which we extinguish the fiery darts of the wicked one” (Eph. 6:16). Satan’s main weapons are the lies he shoots into our hearts like fiery darts. We’re not supposed to use logic to duck away from Satan’s lies. In the face of Satan’s lies, God calls you to hold up the shield of faith, hiding behind what God has told you is true in the gospel.

So Satan shoots his fiery darts at you, saying, “You’re no good. After what you did, do you think God still loves you? You can never make a difference.” That’s when you hold up the shield, block off the Enemy’s lies and preach the gospel to yourself: “I am saved by grace through faith. I have not received the spirit of fear, but the Spirit of adoption as sons. If God is for me, who can be against me? Surely, goodness and mercy shall follow me all the days of my life!”

5. Remember your salvation and God’s faithfulness.

Paul tells us, “Take up … the helmet of salvation” (Eph. 6:17). The helmet is used to guard our heads, the center of our thinking. Paul is telling us to let the truth about our salvation and God’s faithfulness in our lives permeates our minds.

From Outreach Magazine  Being a Conduit of God’s Mercy

There’s a simple way you can put on the helmet of salvation each day. One of the things I tell myself every morning is: In Christ, there is nothing I could do to make God love me more; nothing I have done that makes him love me less. I encourage you to do the same.

6. Be saturated in the Bible.

Paul ends his list with two offensive weapons. The first is our sword, which is the Word of God. Your ability to overcome Satan is directly proportionate to your knowledge of the Word of God. Trying to fight off Satan without knowing the Word is like running into battle without a sword.

If you want to overcome Satan, you must read the Bible, learn the Bible, meditate on the Bible and memorize the Bible. You should be so saturated with it that when life cuts you, you bleed God’s Word.

7. Devote yourself to bold prayer.

The final piece of armor is prayer. Paul wants to make sure that through our battle with Satan, we are “praying at all times in the Spirit” (Eph. 6:18).

People often don’t include prayer in the list of weapons. But it is. In fact, it’s our main weapon. Prayer is not something we do in preparation for the battle; prayer is the battle. Samuel Chadwick wrote,

“The one concern of the devil is to keep saints from prayer. He fears nothing from prayerless studies, prayerless work, and prayerless religion. He laughs at our toil, mocks at our wisdom, but trembles when we pray.”

When we boldly ask much of God for his kingdom, we put the gospel to action and overcome Satan with our faith.

God has not left us alone in our battle with Satan. In Christ, we have a resurrected Savior who defeated the worst of Satan’s attacks. In him, we have a newfound identity that cannot be shaken. In him, we have every piece of spiritual armor we need to overcome Satan’s activity in our lives.

For more, be sure to watch the entire message here.

J.D. Greear is the lead pastor of The Summit Church in Raleigh-Durham, North Carolina (a 2016 Outreach 100 church—No. 46 fastest-growing and No. 42 largest), and the author of several books, including Gaining by Losing: Why the Future Belongs to Churches That Send. This article was originally published on JDGreear.com.

How Will the Church Respond to a Changing World?

Planting a Church That Outlives Itself