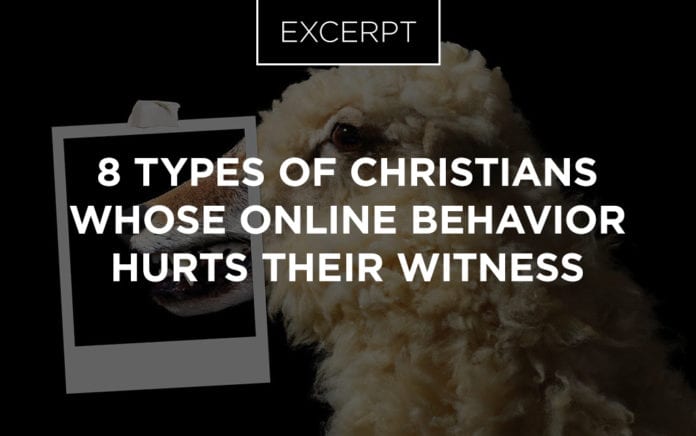 Do you recognize one of your favorite thought leaders—or yourself—in any of these descriptions?

Excerpted From
Christians in the Age of Outrage
By Ed Stetzer

We live in a world that is bombarded by technological developments, and our habits are being developed long before we stop to think whether these advancements and practices are helpful. In a study charting the well-being among American adolescents (measured by self-esteem, life satisfaction and happiness), psychologists discovered a significant decline beginning after 2012.

In exploring the underlying causes, researchers observed that increased use of smartphones by teenagers is likely a contributor to the trend. They found that teenagers who spent more time engaged in screen activities (e.g., social media, the internet, texting and gaming) registered lower levels of psychological well-being. On the other hand, teenagers who limited smartphone use and regularly engaged in nonscreen activities such as in-person social interactions, sports or exercise, homework and attending church activities had higher psychological well-being. In essence, technology use is having a noticeable and negative effect on our kids. Now I’m not suggesting we should return to the days of landlines or carrier pigeons, but it’s worth considering how our technology is shaping us.

Christians often have the same bad habits as everyone else, which not only damage their well-being and relationships, but also their spiritual vitality and witness.

There are several kinds of Christians who hurt our witness through their online behavior. Not all these categories are equally destructive, but they all carry inherent risk that needs to be understood. Though I can think of many Christian leaders who fall into each of these groups, my objective is not to call out examples of specific Christian leaders. In fact, people throughout the church—pastors and laypeople, theologians and students, elders and greeters—fall into these patterns. Our eyes will be drawn to find categories for the people who annoy us, but I’d encourage you to think through these examples in two ways. First, what category do those whom you are allowing to influence you fall? Second, where do you fit?

Every tradition has them. The ex-Catholic, ex-evangelical, ex-Reformed, etc. They line up to tell the world everything wrong with their old camp, spilling the beans and dishing on the secret handshakes. For some reason, because they went to VBS for a dozen years, they assume they understand the ins and outs of an entire theological community. The sad truth is that we often use these vengeful outcasts as a proxy for actually engaging with other communities. Why would I need to talk to Catholics about what they believe when an ex-Catholic will give me a (totally unbiased) account of their faith? Thank goodness I don’t have to engage those homophobic evangelicals; I have half a dozen converts to mainline Protestantism on speed dial.

To these Christians, everything is always the worst. Whether it’s society, the church or politics, they are always pointing out the negative. Whenever a community they don’t like voices a concern, they dismiss it as inconsequential. Whenever a leader they have criticized takes a step in the right direction, they point out that it’s not enough. It seems they aren’t out to build bridges but to demand unconditional surrender. They have confused being prophetic with being Chicken Little.

Just as with clickbait, these Christians are hunting for the slightest heresy, the slightest scandal and the slightest misstep to pounce on. Little thought is given to whether what they are saying is constructive or good; the point is to generate as much attention as possible. They know that the question they constantly ask themselves, What will get me likes or views? depends on how much outrage they can provoke.

Perhaps fearing the possibility of provoking the mob, some Christians try to sit on the sidelines. Endlessly tweeting Bible verses and quotes from their favorite pastors, they’re more like Christian fortune cookies than people interested in engaging others. They appear to be retreating in confusion or fear. While this usually does not hurt others, I’m not convinced it helps either.

Christians often get a black eye from rising up to defend our culture at the expense of the gospel. These cultural defenders tend to struggle with conflating their community or tradition with their faith. The result is that when they get into debates over social and cultural issues such as marginal tax rates, they bring a passion that should be reserved for the gospel.

Are you interested in the heresies of church history but don’t have time to do the research? Want to flirt with Marcionism or Arianism but need a guy wearing a cool vest or a woman in a fedora to reduce it down to catchphrases in a video set to soft rock music? Don’t worry, the internet is full of leaders ready to sell you on how the church has gotten Jesus or the Bible completely wrong for two thousand years and how they’ve now put it all together. The truth is, the historic Christian faith has endured for centuries, and God is calling us all to the hard, and often obscure, work of personal sanctification and community mission.

There is a law that for every forum for conflict and disagreement, passive-aggressive people will find some way to bend it to their will. The rise of the “subtweet” is evidence of this. By not directly referencing the object of their outrage, Twitter users somehow think they have avoided the fight. These kinds of indirect engagements arise from pride without the empathy to actually engage the person with whom the subtweeters disagree. They want credit for defending or criticizing another without the work or accountability that goes into direct exchanges.

Do you have that one friend who can make everything about politics? Republican or Democrat, it doesn’t really matter. Nowadays the internet often feels like a room filled with “that guy.” Their Facebook pages are packed with political commentary, and they are always among the first to post their interpretations of some major event. Whether they take the progressive or conservative viewpoint, they write as if each event is everything to them. More troubling, sometimes they interweave their political beliefs with theology as a means to prove that disagreeing with them is disagreeing with God.

This list of online profiles is hardly exhaustive, but it does include common characters I meet in the church and online on a regular basis. The way they engage others through technology may feel good, and they may believe they are contributing to the kingdom, but in the end, they just feed the outrage.

The key point is that technology is neither inherently good nor bad. Rather, it is a tool that God has provided and that is becoming more powerful with each generation. It can facilitate the work of the gospel: aiding church plants, getting aid to the needy, encouraging the downtrodden and equipping the saints for ministry. It can also become, as with the Tower of Babel, a source of pride that tempts us to place our trust in human ingenuity.

This does not mean we must reject technology. We simply need to harness these tools rather than allow them to master us. We need to be willing to see ourselves in examples of outrage, recognize that this is not the calling of a believer and lay down these patterns of self and community destruction for the sake of the gospel.

Excerpted from Christians in the Age of Outrage: How to Bring Our Best When the World Is at Its Worst by Ed Stetzer. Copyright © 2018. Used by permission of Tyndale House Publishers, Inc. All rights reserved.