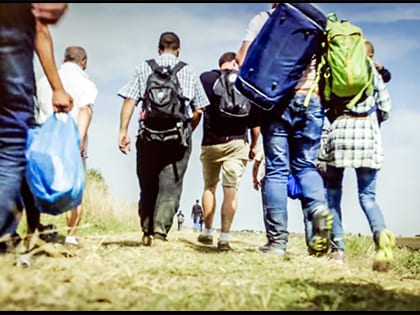 Children are being separated from their families, threatened and assualted at the U.S. border. Here is what you can do.

I am a black mother of a black child in America, and that means that I carry an abnormal desire not only to ensure my child’s safety but to actively pursue and defend it. I learned this from my ancestors. From the time I was a child, I’ve been made aware of this burden.

Harlem Renaissance poet, Langston Hughes, informed us in his poem, “Mother to Son,”

Well, son, I’ll tell you:
Life for me ain’t been no crystal stair.
It’s had tacks in it,
And splinters,
And boards torn up,
And places with no carpet on the floor—
Bare,
But all the time
I’se been a-climbin’ on,
And reachin’ landin’s,
And turnin’ corners,
And sometimes goin’ in the dark
Where there ain’t been no light.[1]

This is a narrative of a woman who is not wanted in her country, and yet she wants the best for her son. She tells him that in spite of her reality and the ever-present darkness in her life, he must keep going, he must not turn back, he must not fall and he must continue to climb higher.

She keeps climbing because she wants a better life for herself and her son. That’s what all decent humans want for their offspring—a better life and the opportunity to keep climbing in spite of the darkness.

As I reflect on this artistic work, I am reminded of the human need and desire to survive. I am also heartbroken by the mothers who have similar words to say to their children, but maybe now they are saying it with a little less hope—or maybe their children can no longer hear their voices at all because they have been separated.

The Reality We Face: Children Are Being Torn from Their Mothers

There are so many injustices happening in our world today that it is easy to turn a blind eye to issues that we feel don’t concern us. At other times, because of the endless demand and supply of “news” and social media, it is also easy to get caught up, overwhelmed by it all, and to suffer from what some call “compassion fatigue.” At any time of the year, I can find myself on either end of this spectrum.

Every now and then, however, I have to stop, take a step back to access an issue that has been placed in front of me and then prayerfully discern how to act.

That was my desire when I discovered the latest immigration tactic which is causing the separation of families at the border. Children are being separated from their families. That’s a fact. Pause, and take that in for a moment. The government of the nation in which God has placed us to witness to His kingdom has now taken hundreds of immigrant children away from their parents.

From Outreach Magazine  7 Practical Questions to Create Your Best Strategy

In addition to the physical separation that most certainly is traumatizing to any child in a new land of strangers where they might not share the same language and have no level of trust, this is a physically dangerous reality as well.

The American Civil Liberties Union (ACLU) recently released a report indicating that several migrant children were allegedly beaten and “threatened with sexual violence and repeatedly assaulted” while in custody of the United States Customs and Borden Protection (CBP). Additionally, I know from my advocacy work against human trafficking and modern-day slavery that immigrants and children are a vulnerable people group in this regard as well.

The Immigration Problem Is a Biblical Problem

Let me be clear: I am not writing to support or defend undocumented workers who come to this country or to condone anyone who has violated our current immigration legislation. As an American citizen who has served this country as both a Marine Corps officer and a federal government employee at the Department of Homeland Security, I understand the importance of keeping our homeland and American citizens safe.

On the other hand, I will say unequivocally that we have a broken and unjust immigration system that is in need of change. Most American citizens lack knowledge of how our immigration system and policies actually work (or don’t work). At best, we only repeat what we have heard on our news broadcast of choice.

It was not until about six years ago that I began educating myself and unpacking the immigration issue. That education began by paying attention to friends and experts in this field, like Jenny Yang, researching Christian organizations who are actively involved with this work like World Relief and the Evangelical Immigration Table, and then reading the book (which has been recently revised and expanded), Welcoming the Stranger: Justice, Compassion & Truth in the Immigration Debate. Dale Hanson Bourke’s book, Immigration: Tough Questions, Direct Answers has also come highly recommended.

Today, I’m not writing to convince you of my opinion. It doesn’t matter.

What matters is that the parent/child separation policy and actions that the United States government is currently taking are inhumane and unjust. The Bible has something to say, particularly to pious people who profess godliness, about that. Here the inspired words from the prophet Isaiah (58:6–7):

“[Is this not the type of fast God has chosen?] To loose the chains of injustice and untie the cords of the yoke,
To set the oppressed free and break every yoke?
Is it not to share your food with the hungry and to provide the poor wanderer with shelter—
When you see the naked, to clothe him,
And not to turn away from your own flesh and blood?”

From reading the Israelites’ narrative, it is clear that God’s law is faithful even regarding the treatment of the aliens, sojourners, widows, orphans and the poor living among them (Deut. 24:19–22, Ex. 12:43–51). God does not show partiality between his chosen people, Israel, and the Gentiles in their midst. On the contrary, God was clear when he spoke,

From Outreach Magazine  The No. 1 Obstacle of the American Church

“When an alien lives with you in your land, do not mistreat him. The alien living with you must be treated as one of your native-born. Love him as yourself, for you were aliens in Egypt, I am the Lord your God” (Lev. 19:33–34).

As a descendent of those whose ancestors have been enslaved in this country, I understand this language well. Life for my ancestors has not been a crystal stair, but we keep climbing and we encourage our children to keep climbing.

I cannot imagine the dire circumstances that would cause a family to leave their own country, relatives, and everything else that is known to them, in order to come to our country with very little, and even risk their own deaths, for the mere possibility of making the climb.

God is concerned about the nations! His Word is clear in the Old Testament and in the New, and when his word stands against the laws of the land, then I must obey him alone. Otherwise, we are no different than the hypocrites Jesus calls out for honoring him with their lips but having hearts that are far away, for worshipping him in vain and for rejecting the commands of God for the traditions of humans (Mark 7:6–9).

What the Bible says matters, and that is why I have joined in the #notwithoutmychild and #familiesbelongtogether campaign. I am pro-life at all stages and for all people groups.

I would take risks and I would fight to stay with my daughter, and today I am standing in solidarity and doing the same for those women and their children at the border. Therefore, I am one of the original signers of a letter to the U.S. Attorney General Jeff Sessions and the Department of Homeland Security Kirstjen Nielsen asking them to stop separating children from their families at the border.

I encourage all women to sign this letter, share with the women you know, and join the campaign as well.

Natasha Sistrunk Robinson, an Outreach magazine contributing editor, is the visionary founder of Leadership LINKS Inc. and is the author of Mentor for Life: Finding Purpose Through Intentional Discipleship and A Sojourner’s Truth: Choosing Freedom and Courage in a Divided World.