Home Features Fastest-Growing Church Is Committed to ‘Outreach, Not Preservation’ 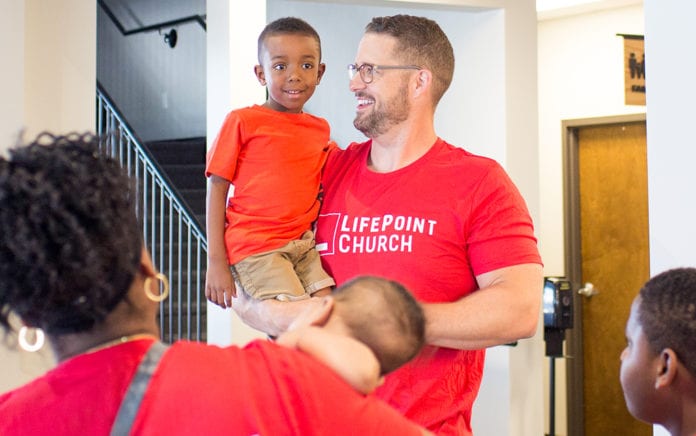 When Outreach magazine recently named LifePoint Church as the nation’s fastest-growing congregation, the staff and 600-plus volunteers celebrated as part of the church’s annual “dream team” party.

Then the Clarksville, Tennessee, congregation went back to the work of maintaining a welcoming presence for those who don’t know Jesus as Savior, according to Mike R. Burnette, lead pastor.

“It was a surprise—humbling and exciting,” Burnette says of the magazine’s ranking, which included eight AG congregations in its top 30. “But we don’t want that to define us.”

Since reaching nearly 2,000 in Sunday attendance two years ago, the AG church has more than doubled again, thanks in part to baptizing hundreds of converts. This year’s highest Sunday attendance hit 4,550 on Nov. 4.

This growth necessitated the opening of a second Clarksville campus in September 2017 (as well as another affiliated church 70 miles away in Smyrna that opened in January).

The LifePoint North Clarksville campus meets in a middle school on the other side of Clarksville, which is just south of Fort Campbell in Kentucky. Approximately 60 percent of its members come from the Army base, which straddles the two states.

No matter where they hail from, newcomers are received by greeters in the parking lot and at several points on the way to the auditorium. They also are encouraged to get involved in LifePoint’s four-week growth track, which starts with an explanation of the spiritual journey in knowing God and concludes with an invitation to serve.

Burnette, 38, says the staff and volunteers seek to maintain a welcoming culture to accommodate the people God is bringing into their midst, especially the unsaved.

“Of those churches that are fast growing in the Assemblies and elsewhere, there is a consistent commitment to outreach and not preservation,” Burnette says. “They have local missions and outreach. They’re growing with new conversions, not just transfer growth.”

Whether at the central campus on Rossville Road or the North Clarksville campus, constituents hear similar sermons; Burnette and North Campus Pastor Beau D. Jensen huddle every Tuesday morning to outline main points of the next sermon.

Although the campuses are on opposite sides of the metro area, the home-based life groups that meet during the week come from both locations. On Wednesday night, students from the branch campus join the student ministry on Rossville Road.

Formerly a youth pastor at a nondenominational Pentecostal church in Kentucky, Jensen had planned to launch a congregation in Clarksville through an interdenominational group until he met Burnette at a church-planting conference. Ultimately, Jensen decided to join forces with LifePoint.

“I was intimidated at first because I came from a small church, but Pastor Mike is so relational that trickles down to everybody else,” says Jensen, 36. “Even though it’s a large church, it doesn’t feel that way.”

LifePoint North is seeing stirring results among the 300 people who gather at the middle school. More than 20 conversions have occurred in the past year, including a couple whose 3-year-old son died; they learned about Christ during the bereavement period and Jensen’s funeral sermon.

This article originally appeared on AG.org.