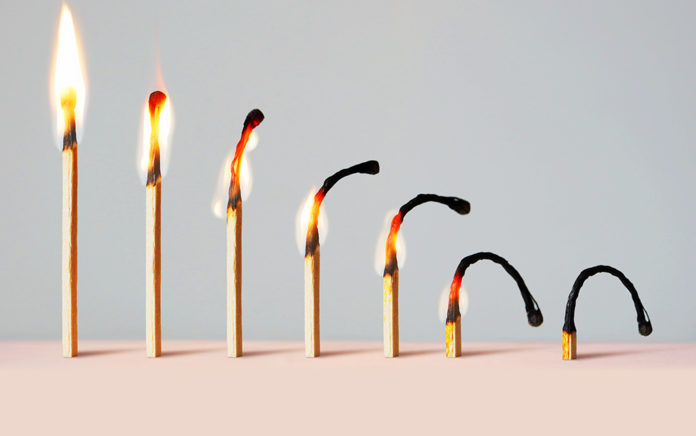 What can you do to point toward a solution, rather than be part of the problem?

You know that people burn out. In fact, given the way you feel, you may have asked whether that’s what happening to you.

But here’s a deeper question.

Can a culture burn out?

And if the answer is yes, any chance that’s happening to America in this moment?

An accurate diagnosis might be helpful right now because, if you’re like me, as you read the news and scroll through your feed, it’s hard not to feel despair.

I was speaking to a group of next-generation church leaders recently, most in their 20s or early 30s, and as I thought about their future, I was reminded of how pessimistic so many of the outlooks on the future are right now.

That’s when it hit me: It is possible for an entire culture to experience burnout, and is that, in fact, happening?

Then the even bigger question: In light of all this, how do you minister to an exhausted, cynical culture?

If in fact, a country is showing signs of burnout, that does three things.

First, it provides an accurate diagnosis, which has value in itself. Not knowing what’s wrong makes it very difficult to make things right.

Second, a diagnosis points the way to treatment.

And third, it ultimately offers hope of recovery.

Which is my motivation in writing this article. Although I’m a Canadian, I’ve always had a deep affection for America and (until the pandemic impacted travel) spent a great deal of time there.

Many of my deep friendships and partnerships are with Americans, so the connections mean a lot to me. Add to that the fact that America is still such a global influencer, and we realize we all get better when America gets better. And we all suffer when America suffers.

So, what’s going on, and what can we do about it?

How do you minister to an exhausted, burned out culture?

SOME SIGNS IT MAY BE BURNOUT

I’ve outlined the symptoms to look for here, but let me give you a partial, short list of what people go through when they experience burnout.

Given that a nation is the sum of its people, it’s good to look within to yourself and around to others. And when certain behaviors and characteristics are widespread enough to characterize a people, you could argue the culture is burning out.

So, what do you look for? While this is not a medical diagnosis, see if any of this sounds familiar.

Cynicism, a loss of passion and a pervasive numbness often signify burnout. To say we’ve grown cynical and grown numb as a culture is a bit of an understatement right now. And cynicism never finds a home in a healthy heart.

In addition to numbness, though, burnout can bring out disproportionate emotional responses like anger over things that shouldn’t normally make you angry. The weird combination of numbness to many things and a livid anger about other things is a classic sign of burnout. On that note, that’s exactly what your social media feed is right now—a strange combination of indifference and fury.

Other symptoms include loss of motivation (This will never get better, so what’s the point?) and the inability to think straight. When I burned out it was as though my mind stopped working. I just couldn’t form many logical thoughts. Take a look at our culture right now, and it’s easy to see we’re not making great decisions, and the decisions we are making are often fueled by impulse, emotion and anger (see above).

From Outreach Magazine  Matt Chandler: Why Church Planting Matters to Me

A final sign worth noting is that people who are burning out often self-medicate. That usually takes the form of addiction.

The addiction can be something as “virtuous” as work or food. For me, it was both of those things. I worked far too many hours and ate some of my feelings (which of course, just makes you feel worse). Other times you can get addicted to spending, gaming, binge watching, exercise or anything else that helps you numb out or escape.

And, of course, people also self-medicate through the use of alcohol, drugs, sex and gambling.

The fact that we’re a deeply addicted culture points to an inability to cope with the current reality. Which opens the door wide for healing and ministry.

So, what can you do to point toward a solution, rather than be part of the problem?

1. Drink From a Deeper Well.

It’s not your imagination, your social media feed and news feed are hard to take right now.

While it’s important to stay connected and in touch as a leader, the main thing your social media and news feed do these days is feed your anxiety. What’s used to feed your mind and heart now just feeds your despair.

Which is why you need to drink from a deeper well.

Obviously, for Christians, that starts with Scripture.

But in a fractious time, even reading the Bible can be one more way to find ammunition to attack the other side or prove your point. That’s just a bad use of the Bible.

Another great practice right now is to anchor yourself in timeless truth. Go back to a favorite devotional book, spiritual classic or something that wasn’t written in the last 20 years.

Sages have made it through crises in the past. If you keep yourself anchored, so will you.

When a culture is wounded, ask yourself whether your chief goal is to bind the wound or aggravate it. Right now, it feels like many have gone beyond poking and into aggravation.

What if you just decided that your approach in life and online was going to be to bind wounds, not aggravate them?

To try to heal your enemies rather than harm them?

A simple way to begin is to ask this question: How can I help?

If what you’re about to say or do doesn’t help your neighbor, don’t say it and don’t do it.

3. Offer a Real Alternative to Hype and Hate.

Our world is looking for an alternative right now.

Deciding what you want to be known for is the first step in the right direction.

As my friend Jeff Henderson points out, most churches (and many church leaders) have been known for what they’re against. It’s much better to be known what you’re for.

Being against something takes almost no work. I personally find it easy to come up with almost instant criticism of almost anything.

So many people eating Doritos who have never once stepped foot on a field know how to manage an NFL team better than a head coach. Criticism is easy and often inaccurate.

It’s much harder to decide what you’re for. But that’s where all the value is.

Being for something will actually require something of you. Some effort, some principles, some sacrifice and perhaps some misunderstanding.

Church leaders make a mistake when they imagine that the scripture is mostly about things we’re against. It’s not.

It’s about things we’re for. The alternative community that emerged in the first century that was characterized by love, equality, generosity, sacrifice, caring for the marginalized and least important and the outward thrust of the Gospel reshaped the world and reshaped history.

The next generation today is looking for an alternative to hype and hate. They’re looking for hope.

The church is their best hope for finding that. If we focus on the things the early church focused on, they will.

4. Take Care of Yourself.

This is a long, tiring journey we’re on.

The crisis everyone thought would last for a few months is dragging on with no end in sight. With chronic instability on the indefinite horizon, healthy leaders are the only leaders who are going to make it long term.

So, take care of yourself.

For years I ran on no reserves. You just can’t do that. And your vacation won’t save you.

The mantra I’ve lived by for the almost 15 years since my burnout is live in a way today that will help you thrive tomorrow. I’ve adjusted everything in my life to try to make sure that happens: My sleep, diet, exercise, time off, the kind of work I do and so much more.

So think about that: What do you need to do today so you can thrive tomorrow?

Cancel some meetings? Delegate a little more? Say no to some new opportunities? Go for a run? Get to bed early tonight? Stop drinking every night to relieve the stress? Take a nap? Get that workout in?

It’s probably a combination of all of that (and more).

If you don’t put some margin in your life today, you won’t have much of a tomorrow.

One of my personal values is “err on the side of generosity.” I like being generous, not just financially, but in spirit, trying to give people the benefit of the doubt and including rather than excluding.

I’m also deeply concerned about confirmation bias and the echo chamber that social media algorithms create (I wrote about that here).

That said, I’ve unfollowed more people in the last year than in the last five years combined largely because they are fueling the anger rather than diffusing it. And no, I’m not talking about the racial justice discussion (I’ve actually followed that conversation more closely).

But the kind of people who are always stirring up controversy, magnifying division, and taking entrenched partisan (rather than principled) stands became such a distraction and agitation for me that unfollowing or muting seems to be the best option.

It’s difficult to think (and pray) deeply when you have people constantly yelling in your ear about their take on every issue whether it matters or not.

So, you may want to consider unfollowing or muting a few people. It’s hard to bring something positive if you constantly fill your mind with negatives.

It’s hard to bring peace if you only fill your mind with division.

The Role Anxiety Has Played in My Spiritual Growth

Bravery in the Face of Fear