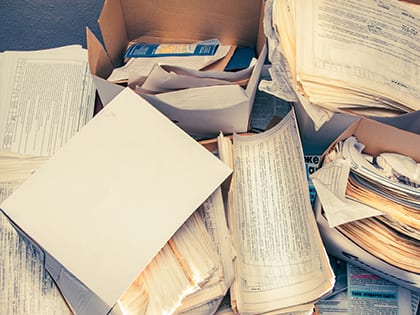 There is a danger of sending the wrong message to guests when a church gets too comfortable with the status quo.

You’ve probably seen one—that is, a church that is generally messy, cluttered with “stuff” and often marked by disarray. Sometimes, the building also carries a unique odor that can only be described as “church basement stench.” I admit my bias here (that I’m a very clean person), but my years of church consulting have shown us that a messy church building often says:

1. Nobody Cares Much About the Building.

The church members would say otherwise, but their lack of attention to the facility speaks volumes of their level of concern.

Somehow, they walk right past the clutter. They don’t see curriculum that’s years old, toys that are broken, and furniture that’s piled in the corner.

Guests (including “spies” that consultants send) look around. They pay attention to how a facility looks, and they form at least a general opinion of the congregation on that basis.

4. Somebody’s Not Doing Their Job.

Sometimes, a leader or employee is responsible for keeping the building neat and clean. In those cases where it’s apparently not happening, it’s possible that laziness has gotten in the way of neatness.

5. The People Have Grown Comfortable With Where They Are.

That’s one reason they can walk by the messiness and not see it. You get so used to the mess that it becomes the norm—and nobody worries about it anymore.

6. They Likely Don’t Have a Long-Term Vision or Master Strategy Plan for the Church.

My experience is that churches that give little attention to their current facilities seldom think long-term about future facilities, either.

From Outreach Magazine  Ron Vietti: Bring the Message to the People

7. They’re More Intent on Holding On to the Past Than They Are Looking Forward to the Future.

Thus, it’s not uncommon for them to showcase old furniture, old pictures and old memories. Changing anything is almost anathema.

8. They Keep Adding Stuff (and Ministries) Without Cleaning Out Anything.

Often, the cluttered, messy building is a symptom of a church that’s cluttered in general. They don’t think much about re-evaluating, re-focusing, re-strengthening, and even reducing their ministries when needed.

9. They’re So Busy Doing Outwardly-Focused Ministry That They Don’t Have Time to Worry About Their Building.

I add this one as a possibility, but I’ve seldom seen this one.

What would you add to this list, both positively and negatively?