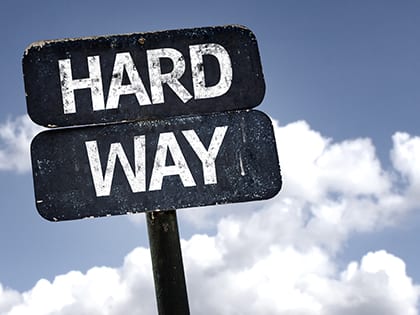 These are four essential leadership lessons I had to learn the way. Hopefully, you can learn from my mistakes.

Here are four leadership lessons I’ve learned the hard way. Some I’ve had to repeat many times to learn. I hope you can learn them from me without having to repeat them.

The hardest decisions a leader makes always involve people. Many times a leader knows the right thing to do in employment situations, but simply needs (whether the leader knows it or not) someone to confirm it. That’s why we must continually surround ourselves with other people we trust and never make decisions involving people alone. This is true whether hiring, firing or correcting.

At times, the person helping me discern has been my wife. Other times it has been other coworkers or a team of people formed only for this purpose, obviously dependent upon the confidentiality of the situation. If you’re hiring a new employee you would include different people than if you were having to release someone. In some cases you need outside advice. I have consistently relied on a board of advisors in leadership—whether formal to the organization or informally gathered by me.

2. Little things can be big things.

The little things are often bigger deals and cause more problems in an organization than the big things. Take something such as enthusiasm, for example. One person on the team has one success in his or her area and it’s worth celebrating to them and those closest to them. But, that one smaller dose of enthusiasm, if celebrated well and strategically, may become contagious to the entire team. A little enthusiasm goes a long way.

The reverse is true also. If one person on the team develops a negative attitude, for example, and it’s allowed to continue impacting the team, the entire team might be affected. And, it doesn’t matter how minor a role the person plays on the team. (Of course, that’s because there are no minor roles.) Years ago, when I was in another field, we had an administrative assistant several layers down from me in the organization, but her attitude impacted mine. I didn’t have to interact with her a great deal, but over time I realized she was negatively impacting more of the team than I knew. It was actually toxic to be near her. In this case, it was no longer a small matter. It was a big deal.

The greater the challenge the greater the need for a healthy team. Healthy teams are formed when everyone feels they add value to the team and their voice is being heard. As a leader, what you don’t know can hurt you. Communication is often the missing element in many organizational problems. When a leader says, “I don’t know”, it welcomes the input of others on a team. Let people have input into the way change is made. Give them a seat at the table of discovery and implementation. And, remember, people never tire of hearing “thank you.”

I’ve tried to implement changes in an area only to have the changes fail, because I didn’t have adequate health on the team to move forward. We moved too soon or with the wrong people or without building enough consensus or motivation. People didn’t understand why, so they resisted. The health of the team should always be considered first.

Bottom line: If you need to make major changes, spend as much time developing a healthy team.

Everyone makes mistakes. I once had someone meet with me who was offended by something I said years ago. They had even carried it with them after they left our team. I was devastated. I’m confident my intent was misunderstood, and didn’t even remember the exact incident, but I hated knowing I had hurt someone with my words. What could I do? I apologized. I asked for forgiveness. I didn’t try to make excuses. I simply said, “I’m sorry” and thanked the person for the courage to come forward. (And, I hope the person can now move forward, but that will be up to them.)

And, I wish I could tell you that was the only time something like this has ever happened, since I’ve been leading. It’s not. In the course of leading, and this has become more true for me the larger the organization gets, I make so many decisions in a day I’m bound to make one wrong or say something in a way I didn’t intend. I’m going to be misunderstood regardless of how hard I try not to be. I’m human. The more I can humble myself, seek forgiveness and attempt to learn from them and make fewer similar mistakes, the more willing people seem to trust me and follow my lead.