Home Features 3 Big Misconceptions About Being on Church Staff 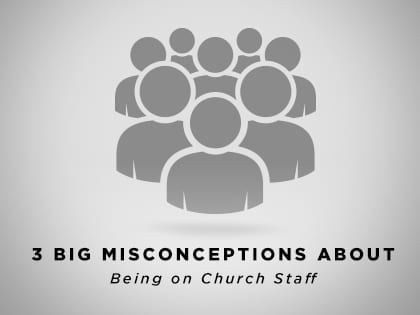 “Sometimes, people come into a ministry role with some misconceptions that can lead to disappointment and disillusionment.”

When I served as an executive pastor in Miami, we brought several men and women on staff who previously served as marketplace leaders. In my role as one of the vice presidents at LifeWay, we hire people from both the local church and the marketplace.

While a team in ministry should absolutely pray and look at the Scripture together, some imagine this will be a prominent aspect of every day, as if the staff team is compensated to be in one large, ongoing small group. The reality is that a ministry benefits from people who show up each day already in the Word, already walking with the Lord and already surrendered to him. If you need a church staff meeting to provide you with your time in God’s Word, don’t join the staff.

Marketplace leaders often report conflict at work, filled with office politics, backstabbing and ladder climbing. They mistakenly believe that ministry roles must not be plagued with conflict and tension. But we live in a world where we face the implications of sin on a daily basis. There are still relational conflicts and struggles, even on a church staff. And not all conflict is sinful. Often, conflict can be healthy and sanctifying as strong leaders sharpen one another.

Marketplace leaders know that the people they serve are often not grateful. In fact, the world can be rude and snarky. A recent Wendy’s Twitter reaction caught some attention because the person running the company’s social media account called out the craziness of a troll who was calling Wendy’s a liar for saying their meat was fresh when it is not delivered on a hot truck. Wendy’s responded with, “Where do you store cold things that aren’t frozen?”

People can wrongly think that if they serve in ministry, the people who are served will often be filled with gratitude. And this is just not true. The people we serve are in need of more and more sanctification, just like we are. And when lack of gratitude for the grace of God decreases, grumbling and complaining increases. This should not be discouraging, however, because the Lord uses people in ministry for this very reason—to call others to lift their eyes to Christ.