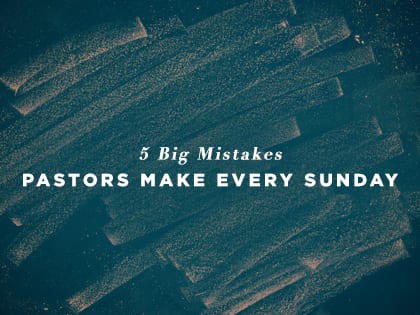 “For pastors, Sunday can be the most draining day of the week. As a result, we can make one or more these five mistakes.”

For pastors, Sunday can be the most draining day of the week. Intense people interaction, teaching or preaching, seeing our critics, trying to remember names and attempting to put our own problems aside to listen to other peoples’ problems—they add up to a stress-filled day. The very day we want to be at our best requires more from us than any other day.

As a result, we can easily make one or more of the five biggest mistakes pastors make on Sundays. Evaluate this list to find out how many you make. Following the list are some suggestions on how to avoid these mistakes.

This term describes the wear and tear on our body from chronic stress. Our bodies have limits. Yet, when we are under stress for long periods of time, our bodies suffer.

Prolonged stress causes sustained high levels of the stress hormone cortisol, which, along with an overabundance of other neurotransmitters and hormones, can cause heart problems, weight gain, impaired immunity, decreased memory due to brain cell atrophy and diminished brain functioning.

If we don’t manage our stress during the week, we will limit our ability to function at our best on Sundays.

2. Too Much Emotional Labor

Psychologists call the emotional work necessary for any job emotional labor. It’s the effort required to put on a public face when we interact with others. Unless you’re a grump or you hole up in your office until right before the Sunday service, your role requires considerable emotional labor as you interact with people on Sundays.

However, when we surface-act too much, putting on a fake smile, we’ll quickly use up the energy stores God gave us for the day.

I based my third book, People Pleasing Pastors: Avoiding the Pitfalls of Approval Motivated Leadership, on extensive research of more than 2,000 pastors. I discovered that over 70 percent of pastors self-assessed themselves as being affected in some way by people pleasing.

As humans, we have a basic drive to be liked. Rejection actually physically hurts because social pain registers in the same part of our brains as does physical pain. On Sunday when we get sucked into trying to make everybody happy (by saying yes too much and/or saying what people want to hear), we quickly get drained.

Richard Boyatzis and Annie McKee, authors of Resonant Leadership, coined a concept called power stress to describe a kind of stress unique to leaders: “Power stress is part of the experience that results from the exercise of influence and sense of responsibility felt in leadership positions.”

McKee and Boyatzis explain that when the demands of leadership get so high and leaders fail to manage it, they risk becoming trapped in what they call the Sacrifice Syndrome.

Sometimes we leaders feel so overly responsible for the success of our churches that we get caught in a vicious cycle of unhealthy sacrifice for others that leads to burnout. And often that weight drains us on Sundays.

Linda Stone, author and consultant, developed this phrase to describe the mental trap we easily fall into when we constantly scan our surroundings to look for the best opportunities upon which to focus our attention. It happens when we “skim” and pay attention, but only partially.

When this happens to you, you won’t focus on the most important tasks at hand and will get further behind on mission-critical issues. Then, you must rush to get the important things done, which in turn contributes to chronic stress.

On Sundays when we are listening to someone and we try to scan the crowd to see who else may want to talk to us (CPA), our energy stores get burned up faster than if we paid full attention to one person.

So what can we do to avoid these Sunday traps? I’m still learning to wisely manage myself on Sundays, but I’ve found that four practices help me avoid those four mistakes.

When we exercise, it causes our brains to release a protein called brain derived neurotrophic factor (BDNF), which has been called the Miracle-Gro for the brain. It encourages new neuronal growth and protects brain cells from stress.

Exercise also releases pain-dampening neurotransmitters—endorphins—which trigger positive feelings in our bodies, similar to what morphine does. On Sunday mornings I usually exercise 30 minutes about two hours before our service begins. This positive mood benefit can last a few hours.

Statio describes a Christian monastic practice that we might call a “mini-transition” between events of the day. It’s a moment between moments when we pause from one task before going to the next. It allows us to break our hurry, obtain closure from the prior task and prepare our hearts and minds for what comes next.

From Outreach Magazine  Why Is LifeWay Giving Away Bibles?

Leaders who practice this can turn down their body’s fight-flight system (the sympathetic nervous system) and engage the rest-and-digest system (the parasympathetic system), which makes us calmer.

Try to practice this between tasks and interactions with people on Sunday mornings. When I remember to do it, my racing mind calms down. Read this post by Daniel Schroeder to learn more about statio.

3. Adequate Sleep the Night Before

I wrote the following in my book Brain-Savvy Leaders: The Science of Significant Ministry:

“When we don’t get enough sleep, we rob our brains of important neural functions because the brain is actually very active during sleep. Although the brain never really shuts down, it’s only truly at rest during non-REM sleep, which accounts for only 20 percent of our normal sleep cycle. During the other 80 percent, sleep helps the brain encode, strengthen, stabilize and consolidate our memories from the day. Our brain replays what we have learned during the day to make our memories stick. Sleep also plays an important role in learning.”

I can’t overestimate the benefits of getting a good night’s sleep the night before Sunday. It works wonders in my ability to be at my best on Sundays.

4. Strategic Use of Caffeine

Yep, I said” caffeine.” Moderate use of caffeine brings several benefits, including blocking the sleep neurotransmitter adenosine (that’s the mechanism behind caffeine as a waker-upper), increased energy, and a better mood You can read my post here about caffeine.

Sunday is great day because it reminds us that Jesus rose from the dead. Yet, it’s also a draining day. Consider applying one or two of these pointers this Sunday and see if it helps you be your best.

What has helped you be your best on Sundays?