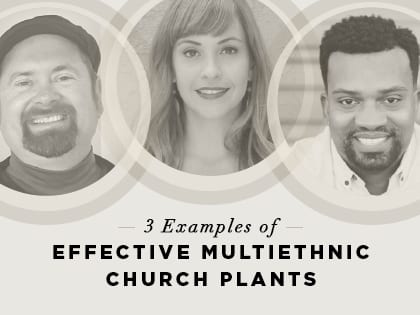 Numbers, dollars and buildings may not be the best way to measure the effectiveness of multiethnic churches.

In the world of homogeneous church planting, growth and development “effectiveness” is typically measured by numbers, dollars and buildings. These may be valid considerations, but they are not the only way—and not necessarily the best way—to measure the effectiveness of a new church plant. Consider these examples of effective multiethnic church planters today.

Noemi has led Seventh Street Church to build a relationship with the city whereby it is seen as a beautiful reflection of God’s love for the community, not isolated from it. In the early days, her husband, Joshua, went to the chief of police to ask how the church could be a blessing. The chief invited Joshua and Noemi to “father the fatherless in the city,” citing high rates of girls between the ages of 12 and 18 who are incarcerated, on probation, in foster care and/or without fathers in the home.

In time, this led the people of Seventh Street to form a partnership with local government and community organizations, through which they host regular events that promote love, hope and relief. Hundreds of girls have been involved through the years, and more recently, 15 to 20 people from Seventh Street have gone through training to gain the responsibility of picking up the girls from their foster homes and bringing them to church on Sunday mornings. In April, two high-level probation officials (both nonbelievers) attended services at the church, and told the people there, “We have never seen a church as generous as yours! Thank you for providing so much love to these girls.”

From Outreach Magazine  The State of the Multisite Movement

In central Mississippi, a disproportionate amount of violence against Hispanics has become problematic. At the time of this writing (April 2016), 15 Latinos have been murdered over the past 30 days in the region, including two Latino men while cooking in their front yard. Having made intentional inroads into the Hispanic community, Matt was invited to a meeting of the Latin American Business Association to discuss solutions. He was the only pastor in the room. The group determined to hold a press conference to raise awareness and asked Matt to help both lead it and to write the press release. Subsequently, the wives of the two murdered men have attended One Church.

Just a few months after launching The Well Church, Trey and his leadership team asked, “How can we influence our city for the sake of the gospel?” Contacting the mayor of Keller, Trey learned the city had never officially commemorated Martin Luther King Jr. Day. He suggested the city invite citizens to watch King’s “I Have a Dream” speech on the steps of city hall the following January. The mayor embraced the idea and soon the city promoted it as their own. Some 200 attended in January of this year, including the chief of police, the Chamber of Commerce, three motorcycle clubs, a self-described atheist and others. The mayor opened the ceremony and Trey closed, encouraging the diverse crowd to begin inviting one another to the dinner table as a first step toward building greater unity in the city. Since then, Trey and the atheist have been meeting often for coffee.