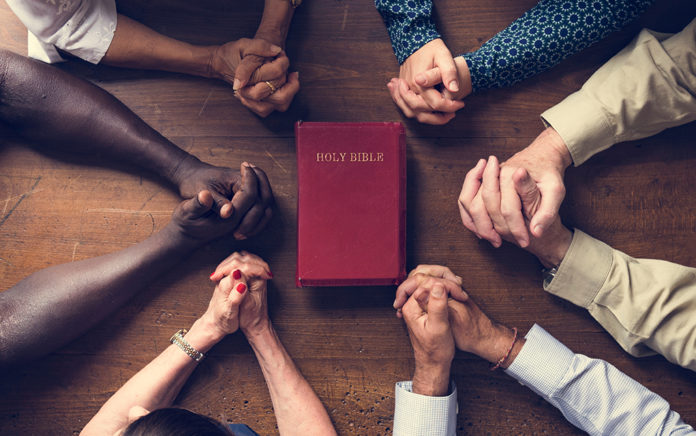 I think most believers agree that biblical unity is something to pray for and work toward. You probably know that reconciliation between a diverse group of people is a beautiful dream. But is the church marked by a compelling ethnic unity today? Do you know how to make progress toward racial reconciliation? Unfortunately, the kind […]

I think most believers agree that biblical unity is something to pray for and work toward. You probably know that reconciliation between a diverse group of people is a beautiful dream. But is the church marked by a compelling ethnic unity today? Do you know how to make progress toward racial reconciliation?

Unfortunately, the kind of oneness championed in the New Testament and modeled in the early church feels like it’s a long way off. If we’re honest, we have to admit that the American church is still marked by deep ethnic division.

I’m sure you’ve heard that “the most segregated hour in America is 11 a.m. on Sunday morning.” Tragically, the effects of hundreds of years of slavery and the legacy of segregation created canyons of pain and distrust. Additionally, the political, social and media landscape fossilized our divisions, creating echo chambers of information and opinions. Instead of building bridges toward one another, it feels as if racial fissures are growing wider and deeper—even within the evangelical church.

Our culture is not marveling at our brotherhood across ethnic fault lines. No one feels the need to create a new name for Christians because of our otherworldly unity. Additionally, most Christians aren’t sure what to do about it.

Many of us don’t know how to talk about it. We are understandably nervous about discussing racial reconciliation because there are so many land mines. Words must be chosen carefully, and we fear saying the wrong thing. Sometimes we retreat from hard conversations because we don’t know what to say. All it takes is a video on Facebook highlighting a racial incident, blunt words from a minority friend, a battle on social media, or a theological discussion on justice, and the fear and division deepen.

From Outreach Magazine  Deck the Church Halls This Christmas

What’s more, when brothers or sisters are wounded by racial insensitivity or mistreatment, they may not know how to express their hurt without being misunderstood or marginalized. Perhaps expressing sorrow has resulted in being maligned or accused of playing the “race card.” They might conclude it’s better to bury the pain—again. Without compassion from fellow believers, frustration or bitterness easily takes root.

The chasm between believers widens.

Part of the problem is that our dream of racial harmony is ahead of our language. The evangelical church still hasn’t found its common voice. At least not yet.

What if we could take a step in that direction?

In the book of Romans deep disagreements based upon culture, backgrounds, and preferences threatened to divide the church. They created an unwelcoming culture among members. Battle lines were drawn. Tribes formed. Emotions ran high. Paul called them to a bigger vision:

“May the God of endurance and encouragement grant you to live in such harmony with one another, in accord with Christ Jesus, that together you may with one voice glorify the God and Father of our Lord Jesus Christ. Therefore welcome one another as Christ has welcomed you, for the glory of God.” —Romans 15:5–7

Welcoming one another. Living in harmony. Glorifying the Father with one voice. Reflecting the unity of the triune Godhead.

That’s the vision: a diverse and united church.

John Perkins, civil rights activist and author of One Blood, believes the church is the best place for racial reconciliation. He writes: “There is no institution more equipped and capable of bringing transformation to the cause of reconciliation than the church. But we have some hard work to do.” I think he’s right.

Lament is where we can begin.

Christianity looks stunning to the world and most emulates Jesus when our identity and unity in the gospel are more foundational than any other identity—including our ethnicity. Our broken world needs to see this vision lived out in new and fresh ways in the church.

From Outreach Magazine  Walking in God’s Known Will

While lament doesn’t solve all the problems, it’s a place to begin. For the sake of racial reconciliation, I’m inviting you to embrace a bigger, heavenly vision.

Come, weep with me.

A PRAYER OF LAMENT

O Lord, how long will your church be divided along racial lines? How long will the lingering effects of animosity, injustice, and pride mark your blessed bride? How long, O Lord, will my white brothers and sisters not understand the pain in those whose experience is different than ours? How long, O Lord, will my minority brothers and sisters struggle with distrust and feel ostracized?

God, grant us the heart to weep with those who weep. Give us empathy and understanding. Create trust where there is pain. Make your church the united bride you want her to be.

These divisions of mistrust and historical bias run deep, O God. Without you, nothing will ever change. In our pain and our weariness, we express our hope that Jesus can change our hearts and unite the church. We believe the gospel is greater than our divisions. And we long for the day when the world will take note of how we love each other. So, help us to meet each other in this prayerful journey. We come to learn to lament. Hear us as we weep together, that we might walk together.

In the name of Jesus, our King. Amen.

Excerpted from Weep With Me by Mark Vroegop. This article first appeared on Crossway.org; used with permission.