Home Resources Books Evangelism and the Way of the Cross 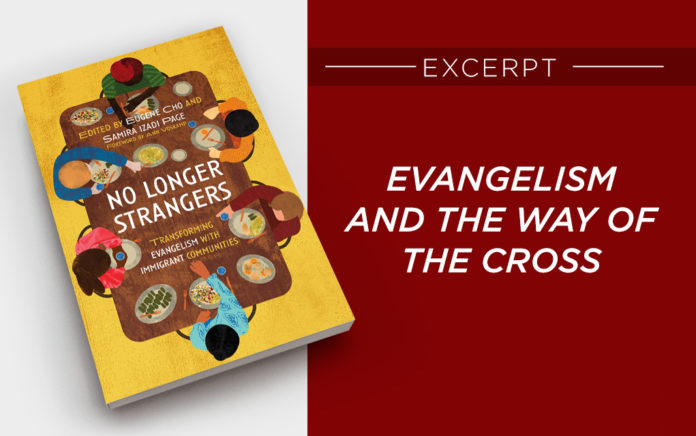 Excerpted From ‘No Longer Strangers’ (Eerdmans)

Billy Graham was one of the most influential Christians in the 20th century. He preached the gospel face-to-face to more people—210 million, including satellite feeds—than perhaps anyone in history. He was a major catalyst for evangelism. At an international conference on evangelism in Amsterdam in 1983, Graham declared that Christians should “preach the gospel with urgency; preach it for decision. You may be speaking to some people who will hear the gospel for the last time. Preach it to bring your hearers to Jesus Christ.”

This cry for evangelism represents the core value of evangelical Christians, who celebrated Billy Graham’s evangelistic “crusades” as high points of their movement. In the same effort to have as many people as possible hear the gospel of salvation in Christ Jesus, D. James Kennedy, a Presbyterian minister, founded Evangelism Explosion International in 1974. This program trains laypeople to share the gospel. It has been used by thousands of churches.

What has been the result of these centuries of evangelism by both luminaries and rank- and-file Christians? Just as when Peter preached the gospel on the day of Pentecost and thousands received the message by faith and were baptized, the preaching of the gospel throughout the centuries has caused the dramatic global growth of the Christian faith. Although the majority of Christians in the world have resided in the West for several centuries, Christianity has become a vital, global movement. In fact, today more Christians reside outside of the West (Europe, Great Britain, and the United States) than within it. Christian communities in Africa, Asia, and South America are growing much faster than those in the West.

Evangelism, from the apostle Paul to Billy Graham, has been central to Christian faith. Earnest Christians have lived and died to advance the gospel of Jesus in the world. So, is it reasonable to conclude that as Christians face the twenty-first century, they should continue to evangelize whenever and wherever possible? To answer this, we need to consider another scenario of attempted evangelism—and the possibility that evangelistic fervor can also hurt.

Ahmad, his wife, Suhad, and two small children, Saleh and Imad, are Syrian Muslim refugees. They fled their home in Idlib in northwestern Syria when the city was rocked by the conflict between the Syrian army and antigovernment insurgents in 2017. The family miraculously survived a perilous sea crossing from Turkey to Cyprus. Ahmad and his family spent months in a barren detention center before they were given a visa to the United States.

Their immigration to the United States was in part facilitated by the fictional Christian Refugee Entry and Employment Diakonia (CREED). CREED workers met Ahmad and his family on their arrival at the Atlanta airport. They drove them to a furnished apartment near other resettled refugees. In subsequent weeks, CREED volunteers delivered prepared meals and helped drive Suhad and Ahmad to government offices to continue their immigration process.

Suhad and Ahmad were grateful for the kindness of the workers. They knew they were Christians. There was a reference to the Christian faith of the organization on its website. This did not bother this Muslim family. Some of their closest neighbors in Idlib were Christians.

The first weeks were difficult. Everything was different. The grocery stores were so big they felt dizzy in the long aisles. Some days they felt excited and happy with their new prospects; other days they were deeply discouraged. They had left all they had behind. They were experiencing the painful stages of adjusting to a new culture. Ahmad especially was finding it difficult to control his emotions.

Suhad and Ahmad were especially happy to learn that CREED was going to conduct a special children’s program to help Syrian refugee children learn a few words of English and play some fun games. The leader would be Joe, an earnest twenty-five- year-old evangelical Christian. Joe had already gotten to know the families. He had transported them to appointments, helped deliver meals, and enjoyed conversations over the strong coffee he was offered in their homes.

On the first day of the children’s program, the activities started nicely. Joe led the five-, six-, and seven-year-old kids in a game to learn important English words. “My name is ——,” “I am five years old,” the children said as a ball was passed around the circle. The parents who sat in the back whispered the new English phrases and laughed at each other’s mispronunciations.

After a break for refreshments, there was a curious change of direction in the activities. Crayons were distributed, and the Syrian children started coloring an image of Jesus. The caption of the coloring pages read “Jesus loves the little children.” Red, yellow, and blue scrawls and swirls began to fill the pages. The parents looked at each other. In Islamic faith, images of the prophets are discouraged.

When the last children finished coloring, Joe gathered them in a circle and asked, “How many want to pray?” Three of the kids raised their hand. A few of the parents looked uncertainly at each other. Joe pushed ahead. “Let’s pray,” he said. Bowing his head, Joe began, “Dear Jesus …” Then suddenly—

“What is this?! Stop!” a Syrian refugee parent almost shouted. “It is haram [forbidden] to pray to Jesus.” Suhad glanced at Ahmad, whose jaw was clenched in anger. Ahmad spoke up, “We bring our kids here and you take advantage of us in this way? We thought you were good people. Are you crazy? We are Muslims. It is not permitted to pray to anyone but Allah.” The parents swiftly gathered their kids and departed. A few threw the child’s coloring project in the trash. The rest left them on the tables. The day was a total disaster.

Joe was shocked. He wasn’t trying to evangelize … exactly. Well, if he was honest with himself, perhaps he did want the activities to move the kids and the parents toward accepting Jesus as their Lord and Savior. He wanted to bless the refugee families. What is a greater source of blessing than knowing Jesus is Lord? he reasoned.

The following day Ahmad called the program’s director to state that he was very upset with the relief group, and that his family would look for help elsewhere. All the other Syrian Muslim families withdrew from cooperating with the relief agency as well.

What is the problem in this scenario? Some might conclude that the problem is the unbelief of the Muslim families; the refugees needed to repent and believe in order to truly know God. Besides Joe’s obvious lack of knowledge about the faith of the Muslim refugees, the problem is that Joe was using his position, which was empowered by his control over the resources the Syrian refugees required, to take advantage of the neediness of the families. He was using his position to impose what he knew to be a blessing on the families, who had a different belief system. In short, he was taking advantage of his position to evangelize the children and the parents. When some means of leverage is applied with evangelism—or any type of ministry—it becomes abusive. It ceases to represent Christ.

From Outreach Magazine  A Painless Guide to Monthly Budgeting

Perhaps this hypothetical scenario is too obvious. If Joe had even a modicum of awareness that Muslims regard prayer to any being other than Allah the most serious sin, would he really have tried such a ham-handed approach as to pray with the children? Well, perhaps not; however, Joe could have abused his position even more egregiously.

In any event, the temptation of Christians to use some type of power to evangelize has plagued efforts to make Christ known through the centuries. Just as there have been noble attempts to share the gospel of Jesus in humility and integrity, as mentioned previously, so there have been efforts to compel conversion to Christ. At times this use of power has been severe; at other times the use of pressure has been unintentional, an expression of Christian culture that has become deeply enmeshed with sources of influence in society.

During the Inquisition in Spain in the 15th century, Jews who did not convert to the Christian faith could be killed. Many fled to safety—in Muslim lands! In modern Protestant missions since the end of the eighteenth century, power has been applied more subtly by merging invitations to become Christian with access to education, health care, travel, food, etc. This is what the missions leader Samuel Escobar has termed “imperial missions.”

Why do imperial missions and evangelism coexist? One reason might be that Christianity’s privileged alignment with wealth, political influence, etc., has deep roots in Western society.¹¹ This entanglement with sources of social privilege has so deeply formed Western Christianity that it has become normative and assumed. Many American Christian workers like Joe have been discipled with American Christianity’s alignment with social influence as part of the warp and woof of their Christian culture. For example, such Christian culture takes for granted that Christian prayers should predominate at a public ceremony during a time of national distress, or that elected public officials should openly confess their faith.

Joe’s predicament as a Christian worker who desires to help the practical needs of refugees but also to share the good news of salvation in Jesus Christ raises important questions. Can Christians ever disperse resources that refugees, victims of natural disasters, or the poor need without the resources becoming a bait and switch to promote evangelism? Must relief workers abandon evangelism? If evangelism is so central to the life and continuation of the Christian faith, should the Christian community generally abandon social action in its various forms? If both are essential, is there a formula for how and when a Christian worker should employ one or the other?

Excerpted from No Longer Strangers: Transforming Evangelism with Immigrant Communities edited by Eugene Cho and Samira Izadi Page ©2021 (Wm. B. Eerdmans Publishing Co.) Reprinted by permission of the publisher.