Home Resources Books What Is the Key to Lasting Social Change? 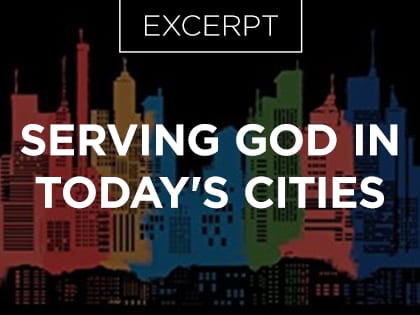 How do we serve the poor without creating dependence? What does serving those in distress do to us?

Change—from the inside out—is key for any ministry dealing with the distressed. External adjustments will only go so far and will often fade away over time. I remember traveling along the Senegal River valley in West Africa, which is a terribly hot place with dust everywhere. All along the river, I saw abandoned aid projects. Some good had been done in those places, but as soon as the foreigners (and their money) left, it had all gone back to the desert.

Social change without heart change doesn’t work. What is the use of filling someone’s stomach, or clothing their body, if they end up in a lost eternity? The commission of Jesus was to disciple them, remember? In our attention to physical needs, we must never neglect the good news that redeems the troubled, sinful soul.

We must also speak the truth if we see that unhealthy dependency is starting to settle in. The Scripture speaks clearly in calling men and women toward self-sufficiency over time. It warns those who “are idle and disruptive to settle down and earn the food they eat.” Yet the very next verse says to the rest of us, “And as for you, brothers and sisters, never tire of doing what is good” (2 Thess. 3:11–13).

It is sometimes hard to strike the right balance between charity and a call to personal responsibility. Certainly we must help the young, the disabled and the elderly for longer periods than those who are capable of maintaining themselves in life. God will give wisdom in each case so that we discern the best ways to proceed.

One organization that has given much thought to this question—and to the best efficiencies as well—is Love INC. (The “INC” stands not for “Incorporated” but rather as an acronym for “… In the Name of Christ.”) Born in the 1970s in the U.S.A., it is now being implemented in Kenya as well. Its origins go back to two dysfunctions: (1) church members having almost no avenue to help the poor and marginalized directly, assuming that special agencies (the Salvation Army, the rescue missions, or certainly the government) would take care of that; and (2) scheming indigents who go from one church to another asking for multiple handouts.

A man named Virgil Gulker asked himself why the churches in a given community couldn’t coordinate their benevolence giving through a clearinghouse, and in the process get church people from all across the city involved with actual hands-on service. If a single mother could not afford winter clothing and shoes for her children, let a trained advocate come alongside her and find the right items in the right sizes from any number of donors in any number of churches. And beyond that? Start providing instruction and contacts for the single mom to get onto a more sure financial footing, so that future pleas for help could be minimized.

In his book Help Is Just Around the Corner, Gulker told about one man named Don:

“He presented himself as an ex-convict, and he was. But from that point he left facts behind and roamed in the realm of fiction. His standard story was that because of his criminal record, no one would hire him. He claimed also to have a physical ailment, which varied between a stomach disorder to a foot problem, depending on the situation. He would go to pastors, claiming to be in town for the first time. However, he refused to stay in a mission shelter and insisted on being put up at a particular motel.

“I have since discovered a fair amount about Don. I can go into any community in my home area of Michigan and describe Don’s modus operandi without mentioning his name, and both agency folks and pastors will immediately say, “You mean Don!” … He always carries sufficient cash to prevent being arrested for vagrancy, and he maintains a post office box in one Michigan town where he receives disability checks from Social Security.”

To prevent this kind of chicanery, Love INC (www.loveinc.org) was created. It began tracking who was asking for what, how much assistance was given and by which churches or agencies. Christians of good will began to feel more confident that their help was actually going to benefit the needy. Churches—large ones, small ones, liberal ones, conservative ones—started finding ways to work together in lifting up the name of Christ among the distressed.

Today, 100,000 Love INC volunteers from 8,600 churches are making a difference in 157 cities and regions. The most recent tally showed 1,680,000 individual needs being addressed in a year’s time. The benefits of Christian cooperation in meeting human needs are sizable. Often an outside voice—an expatriate missionary, for example—can bring together Christian groups that have never really spoken to each other, focusing their attention on the crying needs at hand. New bridges of help can be built. Whatever the organizing process, the results in touching real human needs are invaluable.

Meanwhile, we have not even yet spoken about what ministry to those in distress does to us, the helping population. It stretches our compassion. It opens our eyes to the daily realities of the have-nots. It shows us that, by comparison, our own problems are hardly worth complaining about. It guides us to take seriously the word that says, “If anyone has material possessions and sees a brother or sister in need but has no pity on them, how can the love of God be in that person? Dear children, let us not love with words or speech but with actions and in truth” (1 John 3:17–18).

From Outreach Magazine  The Woman at the Well and Evangelism Today

It also sends a powerful message to our children and others who are watching us. It breaks into their self-centeredness and obsession with material goods. Tim Svoboda, the YWAM leader quoted earlier, has written about the importance of location in training young recruits for ministry. Rather than sheltering them on safe academic-style campuses in the countryside, he says:

“I am finding around the world that students in our DTS’s [Discipleship Training Schools] and other training programs are excited when they are being taught in locations that have hell in their front yards. In once such base that I know, you literally walk out their front door and are slapped in the face by drug addicts, derelicts, homeless and the lost. The DTS students have to struggle with not only facing their own problems, but are interacting each day with those outside their door who are in much worse conditions than themselves.”

We may draw inspiration from the example of the scion of a wealthy English family in the late 1800s named C. T. Studd. Educated in the best schools (Eton and Cambridge), he was a star cricketer, playing on the national team in 1882. Yet when God called him to missionary work, he gave away his inherited fortune and spent the rest of his life among the needy—first in China, then in South India—until his health broke. Once he recovered, he sailed for Africa, this time (against his doctors’ advice), where he founded the Heart of Africa Mission. He eventually died in the Congo at age 70 and is buried there. Meanwhile, his mission had expanded to become the Worldwide Evangelization Crusade (WEC), with which my wife and I have served for many years.

Perhaps C. T. Studd’s best-known epigram is this one, which motivates and challenges us to this day. It is especially relevant to the needs of the suffering in 21st-century cities:

Some wish to live within the sound of church or chapel bell;
I want to run a rescue shop within a yard of hell.