Home Features Telling the Story of the Bible 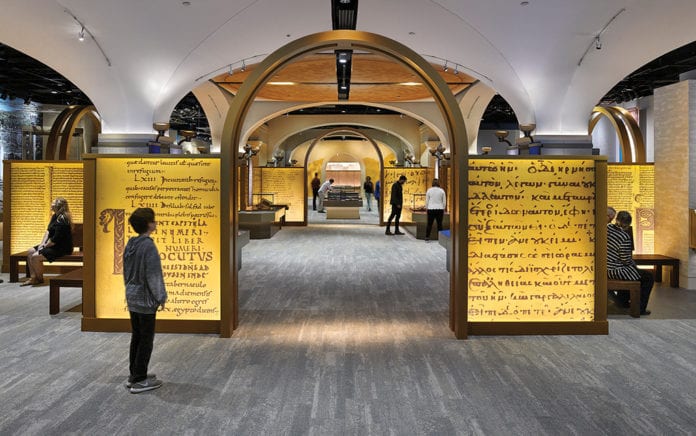 The Museum of the Bible and the saga of the world’s most important book.

As God’s story from eternity past to eternity future, the biblical narrative is also very much our story—the true history of the world written down for mankind to learn from, obey and cherish.

Not only that, the history of the book itself is ongoing and endlessly fascinating. It’s no wonder daring archaeologists might risk their lives to find and preserve its relics. This ancient document, which holds meaning for billions of people worldwide, deserves to be explored, studied and understood, from the oral tradition and the Dead Sea Scrolls to medieval illuminated texts and the app on your phone.

In my book, Design Intervention: Sacred Storytellers, I introduce some of the pastors, ministry leaders and innovators who have influenced my pursuit of designing spaces that lead people toward the discovery of God’s story. These men and women have embraced the overwhelming power of story and infuse it into the architectural spaces they build. I call them “Sacred Storytellers.”

One of these storytellers is Steve Green, the founder of the Museum of the Bible in Washington, D.C. Sometimes called the “Indiana Jones of biblical archaeology,” Green is passionate about the Bible’s story and has amassed thousands of biblical artifacts representing 3,500 years of history—one of the world’s largest collections.

“Here’s a book that’s changed our world,” says Green, “and yet there isn’t a museum out there for it. Seemed to us to make sense; there’s a story to be told there.”

Green, who is also the president of Hobby Lobby, began collecting biblical artifacts in 2009. Within a decade he had amassed a collection believed to include more than 44,000 items valued in the hundreds of millions.

Green opened the Museum of the Bible in late 2017 just three blocks from the U.S. Capitol. The museum is dedicated to a “scholarly approach to the history, narrative and impact of the Bible.” The museum is not intended for just a Christian audience—it invites people of all faiths and backgrounds to see how this book has changed the world. The Bible’s location among the country’s most respected and visited museums ensures the story of the Bible will continue as part of the cultural conversation.

The building itself is a wonder at 430,000 square feet and seven floors housing more than 2,500 artifacts and exhibits. The roof is an arched glass skylight resembling a folding Bible page from the street and presents breathtaking views of D.C.’s skyline from the inside.

It’s not all dusty volumes under glass. The high-tech elements of the museum provide an interactive roadmap, engaging visitors beyond the page into augmented and virtual reality experiences that make the story even more accessible.

My brother Peter McGowan had the privilege to lead our team at PlainJoe Studios in the development of one of the newest learning experiences in the museum. The debut of “Explore! A Virtual Reality Tour of the Lands of the Bible!” enables guests to venture to the Holy Land to explore a 360-degree tour of dozens of beautiful biblical sites where they can see firsthand where the story began.

“Museum of the Bible prides itself in being one of the most technologically advanced museums in the country,” says Karen Poth, creative director of the museum. “‘Explore!’ is just the beginning of cutting-edge virtual reality attractions that guests will be able to enjoy.”

Story is at the core of the human condition. Story forms who we are, and story has the ability to transform who we can become. Each generation passes on collective and individual meaning through story. Story also defines who we are, why we are, where we come from and where we could go.

From Outreach Magazine  Who Gets the Platform to Speak the Word?

The story of the Bible—how it came to be, how God relentlessly inspired its writers and readers to zealously protect its integrity and spread its message for millenia—is unmatched in its antiquity and ongoing influence on civilization.

Read more of our coverage on the State of the Bible in the March/April 2019 issue and at OutreachMagazine.com/Bible.