Home Resources No Book Without an Author, No Morality Without God 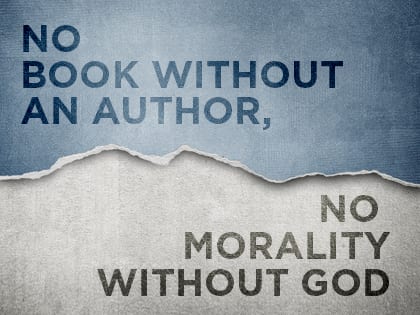 Stealing from God: Why Atheists Need God to Make Their Case
By Frank Turek (NavPress, 2014)

A 2015 OUTREACH RESOURCE OF THE YEAR
Category: Apologetics

What’s objectionable about that thesis? Well-being is usually associated with moral choices (although not always). And science may help us discover what actually helps bring about well-being. The problem with Harris’s approach is that he is addressing the wrong question.

The question is not what method should we use to discover what is moral, but what actually makes something moral? Why does a moral law exist at all, and why does it have authority over us?

From Outreach Magazine  How Can We Bring Light to Immigration Dilemma?

Science might be able to tell you if an action may hurt someone—like if giving a man cyanide will kill him—but science can’t tell you whether or not you ought to hurt someone. Who said it’s wrong to harm people? Sam Harris? Does he have authority over the rest of humanity? Is his nature the standard of good?