Home Resources Bound to Be Free: Escaping the Performance Trap 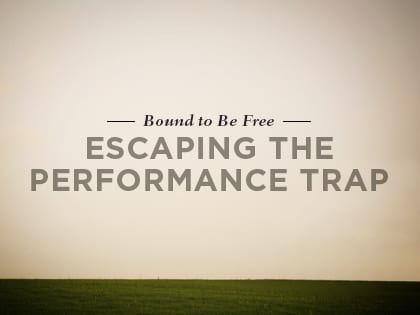 “If you’re caught in the performance trap, Christ wants to lead you out of this personal prison you were not sentenced to live in.”

I’m the type of person who, by design, is always on the go. My mom tells people that I began running when I was seven months old. You read that right—running, not walking! My teachers in grade school would pin notes on my shirt to tell my parents about the “ambitious” activities I performed in front of my class that day and how I would refuse to take my seat when asked. When I was five years old, my parents signed me up for wrestling, hoping it would serve as an outlet for all of my energy. As I grew older, my drive to “do something” never ran out of gas. I hated being still. That same high-energy level that was cute when I was young became a curse as I grew into adulthood.

Soon after my conversion to Christianity, I began laboring in the work of ministry. The thought behind this was, I need to stay busy to stay out of the streets. I’m wired in such a way that when I’m bored, I’m probably going to find something to keep me occupied—and whatever that something is, it’s likely some form of mischief. So I joined as many ministries in the church as I could to keep off the streets of the hood that I was raised in. I convinced myself during my initial days of salvation that busyness equaled holiness. If I was idle, I was sinning and God was mad at me. Couple this belief with the theological teaching that you can sin your way out of salvation, and the result is an explosive concoction that prompts many to turn their backs on the church, Christianity (at least the version they’ve been exposed to), and ultimately God Himself.

To say my life was packed beyond capacity would be an understatement. Day after day I would be the first to rise and the last to lie down (notice I didn’t say sleep). Vacations? Nah, I never took them. Growing up poor, we could never afford one, so I learned to live without them—and just thinking about taking one day off, let alone seven, ushered the sin of anxiety onto the throne of my heart. I said yes to every conference I was asked to speak at, refused to delegate responsibilities to others who had a desire to help, and felt guilty asking any of the other church leaders for help because I was paid to pastor and they were not. I would regularly brush off the stern warning of “slow down” offered to me by my wife, employers, friends, and mentors. People would ask me when I found time to sleep, and my response would be, “I’ll rest when I’m dead.”