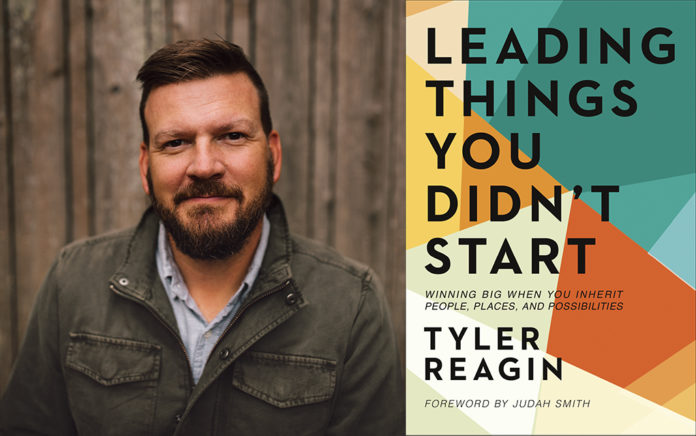 A conversation with Tyler Reagin About succession

Tyler Reagin has spent most of his ministry career leading organizations and teams that someone else started. First, he was the service programming director with Andy Stanley’s North Point Ministries. Then, he became president of Catalyst, succeeding Brad Lomenick. Today, he’s founder and CEO of his own consulting and coaching company, The Life Giving Company. But those years leading what someone else began taught him important nuances about leadership that he shares in Leading Things You Didn’t Start: Winning Big When You Inherit People, Places and Possibilities (WaterBrook).

Here, Reagin talks with Outreach about how his past leadership experiences have influenced his perspective, and explains how leading in inherited spaces differs from steering a brand new thing.

Talk about the difference between leading in an inherited space and leading something you started yourself.

Over the next 10 years, we’re going to see a pretty significant number of really big churches in the U.S. alone that were founded by someone who is getting to retirement age, who is ready to hand it over. And there’s a faith element to this. There’s a need to understand how to enter that space in a way that is excellent, that is professional, that is putting the successor in the best position to succeed while bringing honor to those who came before.

The crazy thing is, you’re going to have people who are stepping in to a complete disaster, where the previous leader imploded or something, and they’ve got to clean up the mess while trying to gain influence themselves. You’re also going to have people step in to positions where the previous person was beloved. Now you’re trying to fill the shoes of someone people love.

It’s very different when you just create it, when you decide how you’re going to do it. You don’t have anybody you have to recognize or anybody you have to make sure is on board. However, that’s just not most of us. Most of us are stepping into an existing board, an existing leadership team, and they have expectations. They have beliefs about me. They have beliefs about the person I’m replacing. I’ve got to learn what those beliefs are. I’ve got to figure out ways to make sure what I’m bringing to the table opens doors. And I need to make sure the people whose team I’m joining know I care about them.

You don’t want to move too quickly, and you want to honor the people who are already there and the circumstances that came before you.

Very much so. And I think one of the beautiful things is, when you move slowly and honor people, they know you’re paying attention and you care. That’s why I think the fruit of the Spirit is so important when we’re talking about this. If somebody joined a team I was part of, they might be the most seasoned leader, or they might not. But if they come in displaying the fruit of the Spirit, they’re going to gain some traction. That might seem so simple, but I feel like sometimes we take what’s simple and make it complex without needing to.

The fruit of the Spirit is critical to leading well. Some might consider those soft skills, but you say they’re just as essential as the hard skills.

If you read any research about emotional intelligence, which has always been considered a “soft skill,” it is understanding how to be self-aware, how to self-manage, how to relationally manage and how to be socially aware. What that tells me is you know how to lead, you know how to read a room, you know how to work relationships. When that research from Daniel Goleman came out back in the 1990s, it was one of the first times data showed that the best leaders in the world know how to lead people best. And so when I’m talking about people coming in and gaining influence as they step in to something they’ve inherited, it has to be gaining influence with relationship.

You might be the best CEO on the planet at turning around numbers and profits, but you will not be able to do that if you don’t have relationship and influence with people. That’s why the fruit of the Spirit is such a simple starting spot for me. It allows us to focus on the relationships that we’re going into versus just trying to fix all the numbers. Patience, specifically, is such a critical piece when it comes to stepping in to something you didn’t start.

What is it about patience that affects so much of our ability to lead well?

We all understand there are times when waiting is better, but we live in a very fast culture, so waiting has become harder. But when we step in to places we didn’t start, there’s going to be a lot of waiting. We’ve got to figure out how to wait for the right moments to move something forward, to move somebody off the team, to go, Now I’ve listened enough, and I’ve spent enough time cultivating the ground. I’m starting to plant my own seeds now. But it takes some time.

What should pastors thinking through their own succession consider?

It can be difficult for founders to ever transition, because you created something, you built it, you stayed with it and you’re convinced nobody is going to care about it as much as you do. There’s got to be some season when you’re able to pray through, work through, the idea that maybe what is needed for the next 30 years looks very different than what was needed for the first 30. It’s easy, I think, to try to find somebody who looks just like you, acts like you, leads like you. What if God were instead calling that person into a very different situation for the next season?

So, for a leader wondering, How do I hand this off well? it has to be a process. There are some amazing organizations and churches that have always had this DNA. I think of Southeast Christian Church in Louisville, Kentucky. They’ve had three or four very successful transitions, most recently from Dave Stone to Kyle Idleman. It’s just in the DNA of how they do church, which is We’re always going to be raising up the next generation of leaders. I think that takes a very secure leader to do that.

I think one of the reasons we get stuck is a lot of times leaders who have been somewhere a long time are actually insecure about the fact that they might not be the leader at some point. There is a loss of identity when you move through a transition, and that’s hard. There has to be an intentional plan and an intentional understanding of how we can do this and what we’re looking for.

From Outreach Magazine  What I'm Learning About Forgiveness

Talk about the impact of identity loss, particularly in ministry.

I’m really passionate about this, because I think so many leaders don’t do the work to really set themselves up to move on to the next thing. Yet you need to do the work, and that means reflection. And honestly, the word mourning is probably not too strong. It’s mourning and grieving an identity that once was. We live in a world where our titles at work really define a lot of who we are in people’s eyes. When that title changes, moving on without acting like it is a big deal is just dangerous, in my opinion. It can be damaging.

When I went to Catalyst, I knew it was the best next thing. It was what God was calling me to. But for seven years, I’d been at Browns Bridge Community Church, a campus of North Point. I helped start the church, I was part of the executive team and a lot of people knew me. And even though it was a really good thing, it was still really hard, because I was no longer that guy. I went from sitting in the producer’s seat every Sunday morning to sitting six rows behind without any sort of connection or job. There’s emotion and identity connected to that.

I encourage leaders to take some time when they are moving from one thing to the next to grieve and celebrate and honor and spend time in prayer and thank God. Deal with the emotional realities of identity change.

What are some of the biggest leadership lessons you’ve learned personally when it comes to stepping in to a new space to lead?

I’m a big proponent of modeling what it is you want your leaders to do and see. I think you gain so much credibility from Day 1 when you’re not coming in with guns blazing and a new-sheriff-in-town mentality. Instead, you come in communicating, We’re in this together, and I want to get to know you.

For my whole career, there have been very few things I’ll ask my team to do that I’m not willing to do myself or that they haven’t seen me do in the past. And even though you’ve earned the right to not have to do certain things that are “entry level” or menial, I still would always fight to do those things alongside my team because I wanted them to know I was in it with them. You need to have a mentality that says, I’ll do whatever it takes for this team to know I’m with them, I’m for them and I care about them. That really requires emotional intelligence and a good bit of the fruit of the Spirit.