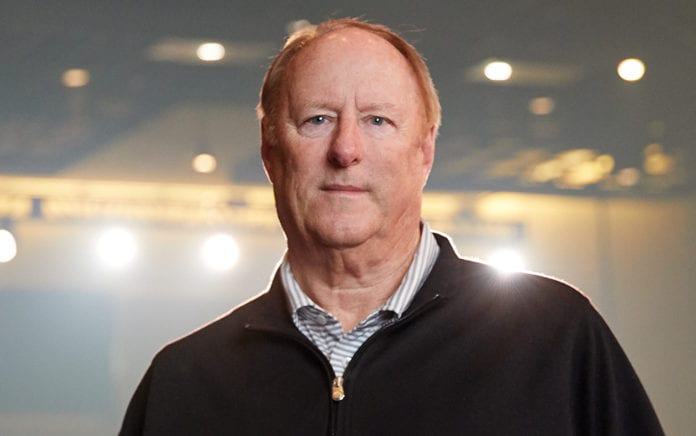 Growing up in an atheist home, Ray Johnston never wanted to be a pastor, but God had other plans.

Having grown up atheist, the eldest child of alcoholic parents rooted in a faithless family tree, Ray Johnston freely confesses his initial reluctance to pastor Bayside Church, this year’s fastest-growing church in America.

Dominated by fear and insecurity, Johnston consistently resisted the pleas of others 25 years ago to take the reins of a thriving church plant in California’s Sacramento area. In an interview with Outreach, Johnston unpacks a series of critical, supernatural and often embarrassing epiphanies that transformed his leadership from paralyzing fear to empowering love.

Growing up, what was your spiritual background?

Zero spiritual background. I grew up in an executive, jet-set, wholly pagan environment. I was an atheist. My dad was a big hotshot in Southern California. Decades ago they wanted him to run for governor. He turned them down, and they got Ronald Reagan instead. Dad became an alcoholic, a rage-aholic, and drank everything away. My mom was also an alcoholic. Dad was an atheist; mom was an agnostic. Their marriage blew up. It’s interesting: For 140-plus years in my family tree, I can’t find one lasting marriage.

Tell me about your childhood and your relationship with your parents.

I remember one time it was 2 a.m. and my parents were throwing stuff—not at each other, but just letting it rip. They were crazy drunk, screaming at each other. Both my sisters came running into my room, crying, and I knew I had to get them out of the house. I was the oldest sibling and must have been about 10; my sisters were maybe 6 and 4. I took the screen off the window, hopped out and helped them climb through.

How did growing up in that kind of environment shape you?

It affected me in a lot of ways, but I would say it created great insecurity. The first thing I used to have to do when I got home was find Dad. Was he drinking or not drinking? Is it safe, or is he mad about something? Years later, I got married to a wonderful woman, and I would come home and ask, “Are we OK?” I had learned to assume that home was not safe until you thoroughly checked it out.

So what became important for you growing up?

Not turning out to be like my parents. I played basketball in high school and college; I thought I’d play professionally. Once I learned how stupid that idea was for a 6-foot white kid, I thought I’d go into coaching or some kind of business. I think what mattered to me is what matters to most teenagers: food, fun and friendships.

When did your parents’ marriage break up?

During my senior year in high school, shortly after being accepted into a four-year university, my dad called a family meeting. We never had family meetings. He said, “Mom and I are getting a divorce.” Then he told me that I was not going to the university because they couldn’t afford it. That was a complete game changer.

In the midst of all this, what influences brought you to Christ?

One of the players on the basketball team was a Christian and a really good friend. He hauled me to Lake Avenue Church in Pasadena. He said, “Hey man, you’ve got to check this out.” I had zero church experience; I was literally walking into church for the first time. I’ll tell you what, I was blown away. I remember walking out of the first service thinking, These people are a lot sharper, more upbeat and cooler than I thought they would be.

But you were an atheist at the time, right?

Well, that was my biggest hang-up. How could all these sharp people believe this stuff? It didn’t make sense because these people were smart. My friend kept bringing me back, and I was attracted to how they treated each other and how they lived, but unless I thought it was true, there’s no way I could dive in. It took more than six months for me to see the truth.

From Outreach Magazine  Craig Groeschel: Life.Church at 20 Years (Part 2 of 2)

What was the turning point in your skepticism?

It was more like a long curve than a point. I remember reading lots of books and studying the evidence for the resurrection, which finally flipped it over for me. I was taking a walk in the forest thinking, Life didn’t just come from nonlife. This didn’t just happen. I remember looking at the stars saying, OK, God, I now think you are real; you actually exist. Then I figured out that God had to be personal. Impersonal things cannot create a personal thing. Two rocks can’t create a person. That’s all I knew at that point, but it was a massive deal.

I wound up going to Lake Avenue a bunch of years, and through that experience I learned to love the church. It changed my life, shaped me forever. The church introduced me to Jesus, healed my image of God, healed my image of myself and taught me what it was like to be married. I started a Bible study in my hometown, and a church was planted out of that Bible study. So, it just went from there.

Did you want to be a pastor?

No. I resisted any calling for a long time. Over the years my wife and I had become heavily invested in ministry, but I did not want to be a pastor. I was traveling, writing and speaking. Twenty-five years ago, we moved to Folsom, California, and started a Bible study in our living room. In nearby Granite Bay, there were two copycat teenage suicides. Four people began to pray that God would raise up a church that would attract teenagers. They tried to get me to plant it, and I spent six months saying no.

Why didn’t you want to be a pastor?

God had other plans.

We started with a Bible study and 26 people showed up. I suggested we do a test service because I believed no one would show up. When no one shows up, it will be over, and I’m out of it. We rented a country club in Granite Bay. We set up about 100 chairs upstairs, but I was convinced only 50 people would be coming. I took down half the chairs so we’d look full.

From Outreach Magazine  The Road to Missional: Journey to the Center of the Church

More than 160 people showed up. It was crazy. We ran downstairs, unplugged the NFL on their big screen TV, and plugged in our worship service. At our first service and we had an overflow room. At the end of the message I felt like a bunch of these people were not Christians. So I gave a crystal clear invitation. Half the hands in the room went up to receive Christ. I told our people we’d do this again in a month. Same thing happened. I expected 100 people to show up, took down a bunch of chairs, and 226 people showed up and a sea of people became new Christians. I said, “We’ll do this again in a month.” But I still would not commit to be the pastor.

What finally changed your mind?

Straight from that service, I flew to Chicago to a prayer summit of 1,000 Christian leaders from all over. After praying for two hours, I began to pray for Bayside that God would bring the right pastor, because it was not going to be me. I’m looking around the room, thinking the pastor could be in this place. I was asking God to point him out to me so I could go talk to him.

I’m guessing that God pointed him out.

What occurred has never happened to me before or since. I’m not one of those guys who hears the divine voice, but God literally said to me, Read Acts 18. So I’m shocked. I look down at my Bible and read about the Lord speaking to Paul through a night vision: “Do not be afraid because I have many people in this city.” The next verse says of Paul, “He stayed where he was and taught the Word of God.” I start crying. I walked out of the prayer meeting to call my wife and find out if I heard from God or not. She said, “I knew God was calling us to this. I was praying for you that God would make it obvious.” We both burst into tears and we prayed, “OK, we’re in.”

What did you do before officially launching the church?

My wife and I stood in front of a supermarket on Halloween and set out a bowl of candy. All these parents came out with kids, and I asked if they had time for a 30-second survey. If they said they didn’t go to church, I asked them why. I got an earful. We spent the entire day listening. What we figured out was that nobody wanted us to water down anything. So we said, “Let’s worship and mean it; let’s teach the Bible in deep, authentic ways and unleash it. But let’s do these things with grace and have a ton of fun.”

In Part 2 of the interview, Ray Johnston talks about critical transitions that have helped Bayside grow, practicing radical generosity as a church, and how paying attention to embarrassing reviews from his staff members transformed the culture of the church.