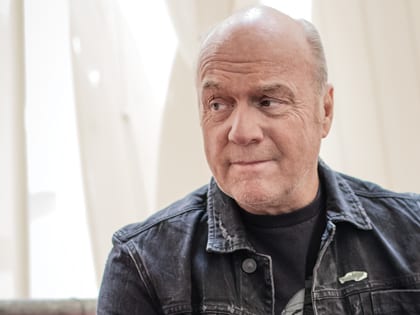 “My coming to Christ was a process of elimination. I knew what the answer wasn’t, but still didn’t know what it was.”

Greg Laurie’s mom was a contemporary woman at the well. Known, that is, in all the wrong ways. An American beauty split image of Marilyn Monroe and raging alcoholic.

At an early age Greg learned to parent his parent, frequently collecting his mom off the floor after drunken blackouts and, once, from a pool of her own blood.

“My childhood was almost like pre-evangelism,” Greg says. “I was so unhappy with my life and her life that it set me on a search.”

In both of his interlocked roles, the motivation remains the same: the joy of sharing incomparably good news.

In your difficult childhood, what was the lowest point?

I was raised in the most un-Christian home you could be raised in. My mother demonstrated for me what the world was. She was married and divorced seven times and was a raging alcoholic. But one of her husbands—a man by the name of Oscar—was very different from all the other men my mom married. He wasn’t a barfly or a rat-pack guy. Somehow, Oscar was button-down, Ivy League educated, moral. He didn’t drink; he didn’t smoke. I don’t know what my mom saw in him. This man, who is not my biological father, treated me as if he were and adopted me. He gave me his love and his name.

I came out of school one day in New Jersey and our Cadillac was loaded up with our luggage but that wasn’t unusual. It was hard to remember the number of places I had lived. I asked, “Where are we going?” Mom said, “Hawaii,” so I was excited. I asked, “Where’s Dad?” and she said, “He’s not coming.” We got on a plane and landed and there was a guy waiting for her named Al. Mom introduced Al as my new dad. He was a mean drunk who screamed and hit.

Every night they’d have fights and smash out plate glass windows. One night, I heard a loud smack and a thud, louder than normal, so I came out and my mom was lying on the floor in a pool of blood coming out of her head. Al was standing over her with a Don Quixote statue. He said, “Go back to bed; it’s only ketchup.” I went to my room, climbed out the window and ran to a neighbor’s house. They called the ambulance. He had almost killed my mom.

So in a very short time, you went from losing a kind father to gaining an abusive one. How did that affect you?

I snapped. I fell into cynicism. I was disillusioned. At the same time I thought there had to be more to life. I transferred to another school with the sole intention of becoming a full-on drug person. Back then in the ’60s there was the belief you could find answers through drugs because it made you more self-aware. I smoked pot everyday and took LSD on the weekends because I was searching. After of few years of doing that, I knew it wasn’t the answer. My [process of eventually] coming to Christ was a process of elimination. I knew what the answer wasn’t, but still didn’t know what it was.

From an early age, Greg Laurie was an admirer of Jesus.

He always felt drawn to him. He vividly recalls the portrait of the savior at the church his grandparents attended. He’d seen all of the Jesus movies. He just kept wondering why the story of Jesus turned out so poorly. In Greg’s mind, crucifixion didn’t seem an appropriate ending.

One day as a teenager, Greg was handed a tract from a Christian. He put it into a drawer along with other tracts he’d collected from the Mormons, Jehovah’s Witnesses, Hare Krishnas. Name a belief and you could find it in Greg’s “God drawer.”

Now and then, he would empty the tracts onto the bed and try to make some sense of it all.

The process was difficult because he had no one to help him understand.