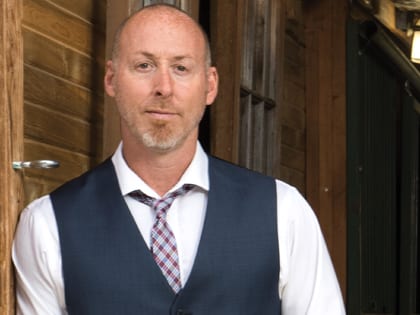 “We’re afraid they don’t want truth. They do. They just want truth to come from a friend and not an adversary.”

It started out traditionally enough: a Nazarene boy from the Pacific Northwest felt called to the ministry. But these things are shaped and clarified through experience. And experience involved hardship.

His older sister, severely chemically schizophrenic, was institutionalized. His dad was out of work for eight years; Hugh, a high school sophomore went to work full-time to help out. His parents divorced. During that time, he stopped doing church and most everything else. “But,” he says, “my relationship with Jesus became very intense and very serious. I felt called to the ministry, but didn’t have anybody to process it with. It was just me and Jesus.”

He went off to a Christian college in Tacoma, Wash., still feeling called but having a deathly fear of public speaking, so he studied psychology and religion, figuring he’d become “a Christian counselor type of guy.” That’s when he picked up his house painting trade which still colors his discussions of bivocational ministry.

He entered Western Seminary in Portland, Ore., but got booted out of a theology class for questioning their views on alcohol, unconvinced the biblical wine was just grape juice. He went across town to Western Evangelical Seminary, but things got tense there over his inability to hear from God during a contemplative spirituality class.

All of which led to a crisis of calling—and 10 bivocational years house painting and working with Youth for Christ in Portland.

During that time Cheryl, his future wife, entered his life. Cheryl had married young and divorced young. Halter met her and her son Ryan a few years later after she came to Christ through Young Life. But Ryan had severe epilepsy, with as many as 20 seizures a day.

“At the time, I was house painting and doing a little YFC. Cheryl and I were exhausted and we couldn’t really leave the house so we just figured out how to open up our home. And that has been the undercurrent of our whole lives.”

Out of that experience, Hugh Halter has become an outspoken advocate for incarnational life, community and leadership. He authored several books including The Tangible Kingdom: Creating Incarnational Community, Flesh: Bringing the Incarnation Down to Earth and, most recently, Brimstone: The Art and Act of Holy Nonjudgment. He is the U.S. director of Forge America, an apprenticing community committed to training men and women to live as missionaries where they already are.

Circumstance led you away from traditional church structures and into neighborhood missional communities.

With all this disability and working a normal job, we never perceived ourselves to be full-time anything. I’d actually given up on my call to ministry. I figured I’d just be a house painter and try to take care of my son and family. But that house just kept filling up with neighbors and new friends. At the time there was no missional or incarnational conversation in the American church. I’d never even heard of the word incarnational. But looking back, that’s what we were doing. In fact, we looked back 25 years later wondering how come it was always so easy to fill our house?

You tried to move people into existing local churches with somewhat mixed results.

When people come to faith through your life they’re being drawn to a way of life—drawn through people to Jesus. They’re not being drawn to tradition or doctrine or theology. When they come into a normal church environment it feels like they’re going to the crazy family reunion. They don’t know knucklehead Uncle Bob and jacked up Aunt Suzie. So they don’t have a context for why people act the way they do in church. They oftentimes don’t identify with the speaker because they don’t know him. It works sometimes. But most of the time we just found that people went, You guys were the ones that led us to Jesus, so lead us.