Home Ideas Data Tells a Story … Why Churches Should Track Everything 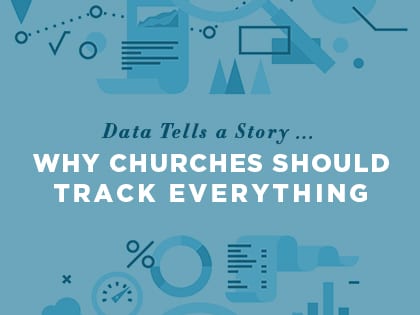 “We keep track of how big the offering is. We keep good track of attendance. But we honestly don’t use data well.”

The dad was irate. He called the Target manager to chew him out. “How dare you?” he yelled. The manager was extremely apologetic and said he would correct things immediately.

What happened was quite simple on the surface: A man’s teenage daughter had received coupons in the mail from Target, but as the dad glanced through them, he noticed most of the coupons were for new mothers. The dad immediately called the local store. The manager with whom he spoke—who had nothing to do with the company’s mailers—apologized and said he’d look into things.

But two months later, the dad walked into the same Target and apologized to that same manager, saying, “It appears some activity was going on that I was unaware of. My daughter is expecting.”

Target had gotten into tracking big data and had figured out that if someone buys unscented lotion, mineral supplements and cotton balls—then in the ensuing months they would buy a stroller, diapers and so on. Target was using big data to draw in customers, sometimes telling them what they needed before they even knew it!

The typical church is not good at tracking data. We keep track of how big the offering is. We keep good track of attendance. But we honestly don’t use data well.

More recently, many church leaders have rejected attendance and offering numbers as the scorecard of success, and that’s a good thing if those numbers lead you to pride. However, what has happened is we have gone so far into the “numbers don’t matter” realm that we don’t have enough helpful data.

One of the best pieces of data I ever read was Ed Stetzer’s stat from Planting New Churches in a Postmodern Age:

That kind of data tells a story!

In figuring out challenges in our own church, and in coaching other church planters, I have found that lead pastors typically don’t spend much time on data. I think that’s a mistake, because data tells a story.

Here are two areas where data has answered some big questions for us recently:

1. Our church’s growth had slowed slightly. I thought we weren’t attracting enough guests, but when I looked at the percentage of first-time guests who came back for a second time, I discovered we didn’t have an inviting problem, we had a retaining problem.

2. One of our core practices is connecting people to groups. Because we keep data of how many people actually attend their group more than they miss (instead of just tracking how many people sign up for a group), we learned that we had a lower percentage of people in groups this spring compared to the last several years.

If we didn’t keep track of things like second-time guest numbers, and how many people are attending groups, we couldn’t make adjustments to live out our values. Or if we did make an adjustment, it would be based on guesswork. And isn’t the work we’re called to do more important than guesswork?

So here are some questions we’ve been asking ourselves lately:

Data tells a story. Because the mission of seeking and saving the lost, of reaching and training disciples, is so important, we need to use everything at our disposal to reach people for Jesus.

I encourage you to have someone on your team who is into numbers track everything you can think of—not as a source of pride, but as a source of humility, so that you can make adjustments to your ministry to reach the lost. After all, if Target tracks data to sell more diapers, shouldn’t we track what data we can to reach people with the gospel of Jesus Christ?

This article is part of our From the Front Lines series, in which several church planters share what they’re learning as they lead their congregations.