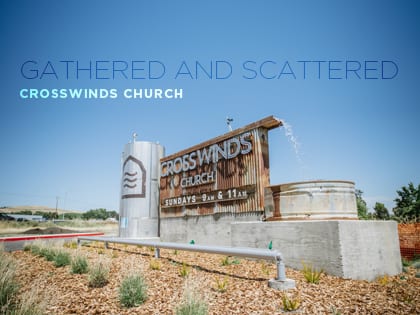 An Old Dairy Farm Is Transformed Into a Metaphor for Restoration

CrossWinds Church describes itself as the church gathered and scattered. They gather together in many different formats and places for spiritual formation and then scatter to reflect Jesus beyond the walls of the church, wherever God leads in the world.

One of their volunteers recently made a statement that expresses the spirit of their vision. As his team was busy doing home repairs for a disabled woman in Livermore, California, he said, “We want to be the face in the community before the new church facility gets here.”

The new church facility has been slow in coming. CrossWinds began a building campaign 14 years ago, while leasing space in an industrial office park in the Bay Area. After a failed attempt to gain approval to develop another site, they acquired a highly visible site adjacent to Interstate 580 in Pleasanton, California. The 35-acre property had been a historic 100-year-old dairy farm, with multiple structures in various states of disrepair, including a worker’s “village,” barns and water tanks. Although within a short distance of a BART transit station, the site evoked an earlier classic California agrarian landscape, with two streams on the property and lush trees throughout.

Previous master plans had proposed scraping much of the site and “mooning the community” with the back of a monolithic sanctuary structure. As I got to know Senior Pastor Chris Coli and this unique faith community, a “Big Idea” of “Restore” surfaced: restoration of the land, of the materials and of the lives in its community, through God’s promises.

CrossWinds recently celebrated the opening of the site to the community. Its agricultural model of gathering and scattering is reflected in countless details in our humble design that takes cues from God’s architecture (the natural site) and the story of the site. A 900-seat, 11,000-square-foot auditorium is inexpensively housed in a pre-engineered metal “shed,” with strategic corners sheathed with reclaimed wood from a few of the dairy structures. The children’s ministry is housed in restored modular trailers, surrounded by intersecting, dynamically playful canopies and garden walls that are finished with reclaimed wood slats from other structures on site. The “spaces between” have a California wine country feel and serve as a community court comprised of decomposed granite, colored concrete and grass mounds as well as a 29-foot barn silo play structure.

From Outreach Magazine  How to Stay Connected While We Are Apart

Robert Jones, a new disciple that just got baptized in the courtyard shared, “I see what God’s guidance did to this old run-down dilapidated dairy, and I have faith that he can restore this old imperfect sinner into something beautiful.” Pastor Chris followed up by saying, “This is what we prayed would happen with this place, that the story the campus tells would be a metaphor for what God wants to do in our lives.”