Home Features Navigating the Leadership Tug-of-War During the Pandemic 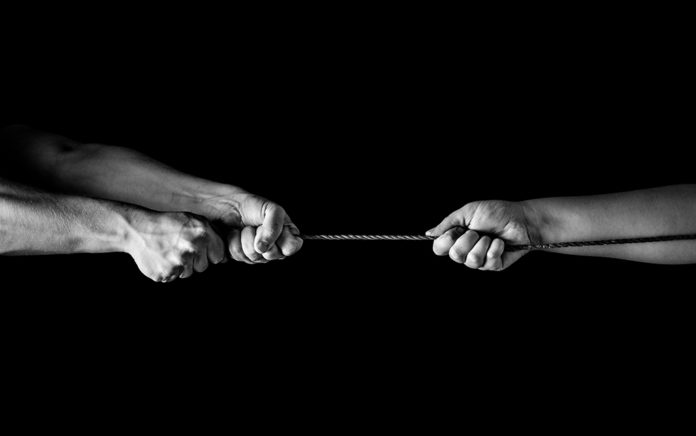 You probably know how the game tug-of-war goes: Two teams stand opposite each other holding a long rope with a ribbon or other marker attached in the center. Both teams pull with all their might until the marker crosses the center line. There are clear winners and losers. It’s especially clear (and a lot of fun for the winning team!) when there’s a mud bog between the teams, so the winning team pulls the other side into a muddy mess.

Tug-of-war is a fun game for young people, but it’s not the way for leaders to deal with issues like a global pandemic. It seems our nation––even our world––is in a global tug-of-war with COVID-19. The virus has not waned this winter; in fact, it was more fierce in January in terms of cases and spread. But now with growing numbers receiving the vaccine the momentum seems to be turning in our favor.

We are tugging back on the virus. But we are also pulling each other apart.

On a more personal, local level, pastors and church leaders find themselves in a tug-of-war not of their own choosing due to this crisis. Pastors have been pulled one way or another because of the divergent views on where we are and how to respond.

RECOGNIZING THE FOUR CATEGORIES IN OUR CHURCHES

Over the past several months church leaders have dealt with four key views in churches. Those holding one of these pull against the rest:

They believe their civil liberties have been violated by protocols set up to combat the virus. Some believe wearing masks is harmful to their lungs. They are ready to get back to normal. In some cases they believe this virus is a flu or has been overblown. They believe church leaders are complicit with the “compromise” being placed on the churches that will have long-term repercussions.

From Outreach Magazine  How to Improve Your Prayer Life

2. There are those who say, “It’s probably good for us to get back to church.”

They don’t see whether or not to gather as a religious liberty issue. They are doing fine, but they miss gathering with their church.

This would include the parents of an asthmatic child or someone on chemo, and many in the elderly population. These people want to come back but are still hesitant.

4. A fourth group thinks badly of you if you went back to holding public services.

They would consider you to be inconsiderate toward the marginalized and those at higher risk. They believe it is wrong to come back together, and that it’s a bad witness to the community because it’s going to endanger people.

If ever there was a time for leadership, this is it.

It’s important as you communicate with your church that you recognize the tension between different groups. Tension is not necessarily a bad thing. If you’ve ever had a belt in your car engine put on too loosely (or too tight so that it snapped) you know the importance of the right amount of tension.

Too little tension leads us to laxity; too much brings anxiety. We want to acknowledge the tension in our time without letting it break our fellowship.

Remind people in your church that it is okay to disagree on secondary issues. Remind them of the things that bind us together. Our common faith, our hope in Christ, and our conviction about Scripture matter more than our immediate views on the pandemic.

From Outreach Magazine  How Suffering Can Open Doors for Evangelism

In deciding to close public worship gatherings the rest of 2020, Andy Stanley observed that “clarity in the midst of uncertainty” is the way forward. You may not come to the same conclusions as Andy for your church, but you can and must speak clearly in this season we didn’t expect nor do we know when it will end. A key lesson from the pandemic is how a pastor and staff decide and communicate well with their people in a time of crisis.

This includes the following:

• Make a wise decision as a team
• Overcommunicate that decision with clarity (and have clear communication channels)
• Lead your congregation through that decision
• Remind them things are changing regularly, so stay engaged.

LEADING THROUGH A DIVIDED TIME

Any decision you make right now will mean that someone will be mad at you. You have to lead through this.

But here is the good news: if you have been a pastor for long you know that when you walk with a family through a difficult season, sitting by the bedside, burying a loved one, and sharing their pain, you know that on the other side of that you will be their pastor in a much deeper and more meaningful way. You can’t please everyone, but you also don’t want to omit any group in your discussions.

This is a crisis like we’ve never experienced, but we’ve experienced crises before. This is a chance for literally thousands of pastors to challenge their leadership become stronger because of it.

This is a time for wisdom not panic, clarity not confusion, and boldness for the gospel’s sake.