Home Features How to Say No Gracefully 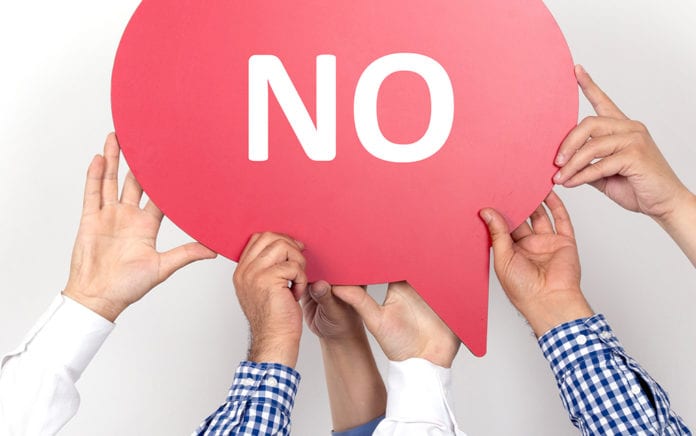 Learning to say no is an essential leadership skill, but how do you do it in a gracious manner?

As a pastor, I’m constantly faced with more time demands placed upon me than I could ever possibly fulfill. As a result, I must make choices. Those demands sometimes are self-imposed (totally my choice) and sometimes they come from others. Often people in the church will ask pastors to do something that takes their time, or they want to meet with them on some issue. In many cases we know deep inside that we should respond with a no. However, because we don’t want to disappoint, we often say yes and later regret it. In this article I suggest 5 ways to gracefully say no.

HOW TO GRACEFULLY SAY NO.

1. Say No Without Using The Word No.

In some settings the word no itself can come across too harsh. Sometimes using other phrases like these can soften your response and yet still convey a no.

• “My schedule simply won’t permit it now. I don’t have the bandwidth. Thanks for thinking about me though.”

• “I’d love to, but right now I can’t. Can you ask me again next week (or whatever timeframe seems appropriate)?”

2. Pause a Few Seconds Before Giving an Answer to Someone.

Because we don’t want to disappoint people, we often allow our default response to be yes. To avoid this, learn to pause a few seconds before responding to someone who asks you for a commitment. That short pause will buy you some time to frame your response, whether it is a yes or a no. Pausing can also give you time to consider what you’d have to give up were you to say yes.

3. Delay Your Response When You Honestly Aren’t Sure How to Respond.

Sometimes the ask is a valid one and you should give more time before making a decision. In that case, tell the person that you can’t give him a decision now but that would like to check your calendar and think more about it. If it does become a no you will have created sufficient time to consider the pros and cons and then to frame a gracious no. And if a boss asks you for something that will cause you to push other important projects aside, explain the situation and your willingness to say yes. Then ask for his or her advice on how to re-prioritize your current commitments so that you can follow through on your yes.

4. Ask Them to Email You With Their Request.

I’ve found that when someone wants me to make a decision on the spot, putting the onus back on him or her potentially creates a default no. I will often ask them to email me their request. Often they never do which becomes the default no.

5. Simply and Kindly Say No, and if Possible Explain Why.

Sometimes you immediately know you should say no. In that case, a firm but gracious no is appropriate. It may feel awkward, but that uncomfortable emotion will quickly pass. However, if you say yes when you should have said no, the feelings of regret last much longer and take a much greater toll, notwithstanding the extra time you’ve now committed yourself to.

Some time back I read the book by Greg McKeown, Essentialism: The Disciplined Pursuit of Less. I highly recommend it. In a chapter where he writes about saying no, he describes how Peter Drucker once said no. It’s a great example of the graceful no. I’ve quoted it here.

“Peter Drucker, in my view the father of modern management thinking, was also a master of the art of the graceful no. When Mihaly Csikszentmihalyi, the Hungarian professor most well known for his work on ‘flow,’ reached out to interview a series of creative individuals for a book he was writing on creativity, Drucker’s response was interesting enough to Mihaly that he quoted it verbatim: ‘I am greatly honored and flattered by your kind letter of February 14th—for I have admired you and your work for many years, and I have learned much from it. But, my dear Professor Csikszentmihalyi, I am afraid I have to disappoint you. I could not possibly answer your questions. I am told I am creative—I don’t know what that means. … I just keep on plodding. … I hope you will not think me presumptuous or rude if I say that one of the secrets of productivity (in which I believe whereas I do not believe in creativity) is to have a very big waste paper basket to take care of all invitations such as yours—productivity in my experience consists of not doing anything that helps the work of other people but to spend all one’s time on the work the Good Lord has fitted one to do, and to do well.’

“A true Essentialist, Peter Drucker believed that “people are effective because they say no.”

What insights have you learned about giving a graceful no?