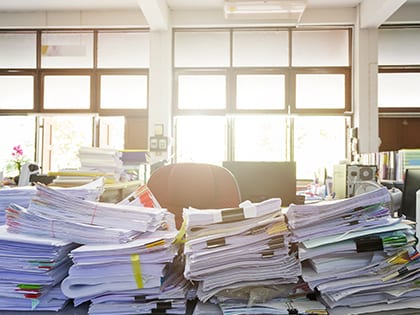 Be vigilant to seek out and root out ways that you are hindering the progress of your team.

When I owned a small manufacturing company I had to learn the language of the field. I obviously had heard the term bottleneck, but I never really understood it, or the damage it can be, until a bottleneck began to impact whether or not we were profitable as a company. When the bottom line of continuing to exist as a company depends on productivity being at its highest, and being the one ultimately responsible, you learn what the term means quickly. A bottleneck can be a really big deal.

I have also learned that the term bottleneck matters in the field of leadership. Leaders should aim to never be a bottleneck in the process of building a healthy and growing organization.

A bottleneck is defined as “a point of congestion in a system that occurs when workloads arrive at a given point more quickly than that point can handle them” (Investopedia.com).

In traffic, the bottleneck is often one car that slows down every other car behind them. We all know the frustration in that scenario.

In an organizational sense, the bottleneck can many times be the leader. When this happens, progress stalls, growth is limited and people are frustrated.

HERE ARE SEVEN BOTTLENECKS A LEADER MUST AVOID:

1. Every decision ultimately goes through the leader.

When the leader is the final lid of every decision it creates a culture where team members feel devalued—like their individual abilities are in question. In fact, it becomes less of a team and more of a group of employees. When everyone has to wait for the leader to make a decision precious time is wasted, productivity slows and frustration rises.

2. Other people’s ideas or opinions are ignored.

Team members want to be a part of something bigger than themselves, but they want to play a part in helping the vision become a reality. When their input isn’t welcomed they feel stifled, unfulfilled and unnecessary. The best leaders I know encourage people to take a risk. They create a “go for it” environment. When only the leader is allowed to “pull the trigger” or “push the first button” the organization faces a huge opportunity cost.

3. The leader is people-pleasing or change-resistant.

I realize I typed the previous sentence, but I’m not even sure those can go together. Leadership in its very definition involves change. Leaders are taking people somewhere new. You can’t get to new without change. That’s always uncomfortable to someone. When a leader is more concerned with keeping people happy, or protecting his or her position, than embracing needed change, everything stalls and team members become discouraged. A team will never be more open to change than is the leader.

4. There is no clear vision or information about the vision isn’t shared.

People flounder when they don’t know where things are going next or what is important to the leader. This bottleneck encourages laziness in some and apathy in others. Leaders who spur movement in an organization are quick with information. None of us in leadership can see very far down the road these days, but the best leaders are transparent and continually sharing what they can see as the future. If nothing else, the team is in the world of the unknown together.

From Outreach Magazine  The Messy Journey to Jesus

When the leader takes on unnecessary assignments, or gets in the weeds of details, the leader is overburdened and the team is underutilized. Both suffer in the long-term. Effective delegation isn’t giving people tasks. It’s giving people the oversight of real responsibility. It’s empowering people to think like owners.

Leaders are built through a recruit, invest and release process. Consider how Jesus led. He recruited the disciples, invested in them and then sent them out to do the work. When people are controlled they never develop. And, they learn to resent the leader.

7. The leader receives all the recognition.

This stalls growth, because team members feel used more than a part of something. People aren’t willing to risk everything for someone else to receive all the praise. The best teams aren’t doing what they do for individual credit, but everyone likes to feel appreciated for what they contributed to the team.

Leaders, ask yourself this question: In what ways am I being a bottleneck to my team?

If you aren’t certain, perhaps you should ask your team—even if you have to do so anonymously.