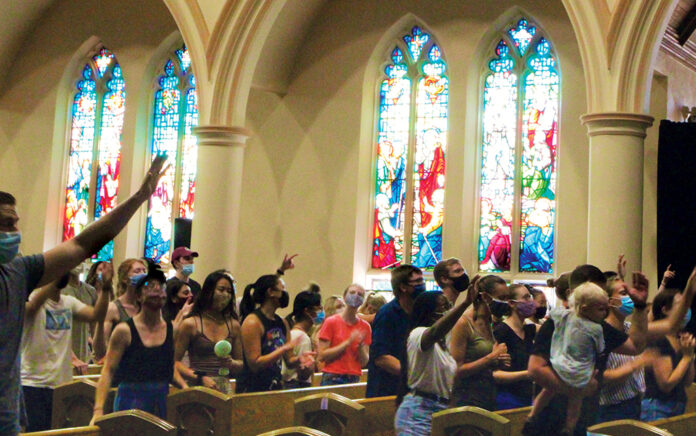 Church planting is the inevitable, logical overflow of a church family on mission.

LIFT Church began with Robin Wallar, a first-year engineering student at McMaster University just south of Toronto. As a follower of Christ, he was frustrated not to find a church on campus. He began to dream of planting a church within the walls—and culture—of his university, bringing Jesus into a world where people live, work and socialize.

Lord, bring me a church or I’ll start one in my dorm room, he prayed. Soon enough, a local pastor who was planning to start a church on campus contacted him.  Wallar joined as a founding member of the launch team. He was discipled by and served as a right hand to that pastor throughout his undergraduate studies. Wallar got married and stayed involved with the church, and then took over its leadership in 2013.

Today, LIFT Church—a name inspired by Psalm 40:1–3—is on seven university campuses reaching a combined 500 people per month during the academic year. It’s made up of 40 Simple Churches (small-group missional communities akin to house churches) that come together for central gatherings on each university campus.

The dream, according to Laura Wallar, who serves as lead pastor with her husband, is “to launch a church at every college and university campus in Canada.” That dream would serve more than 2.1 million students plus thousands of faculty and staff.

Through the years, LIFT Church has adapted and adjusted its model, often finding an uptick in growth and fruitfulness.

For example, when LIFT Church expanded to a second university in 2015, they planted the church largely out of a traditional planting model, says Robin. “We looked outside our context and recruited and funded a church planter and support team.”

They repeated the process with a third university, but by late 2017 Robin decided that the model wasn’t sustainable.

“It was highly talent-driven, requiring great charisma in the teaching, and was not easy to reproduce without outside help,” he says, observing they were better at gathering a crowd than in disciple making. Though there are different challenges that come with using “ordinary” disciple makers, that model showed more promise for them.

So they shifted to sending someone who would simply go and make disciples. Robin and Laura tried this “new” approach in 2019 with a Muslim convert whom they had discipled. They challenged the woman to go start a Simple Church in a new city on a new campus while continuing her career as a real estate agent.

“In so doing, we mobilize the ordinary believer to become a church planter,” Robin says. “And it worked. We have gradually replaced our professional planters with our own people.”

Today, across the church’s seven university campuses in Ontario, all the leaders have been raised from within, and all have professional careers outside the church.

“Planting in a new region now means that we start a Simple Church that reproduces,” he says.

It’s also done bivocationally. As Laura explains, “We’re not afraid of asking leaders to be bivocational; that is, to disciple alongside their vocation. Almost everyone in leadership at LIFT Church is bivocational or has a high commitment to discipleship alongside a full-time career.”

At LIFT Church, living a lifestyle of evangelism is part of the church culture. Laura says, “All have the responsibility to engage in mission. One of the best ways to do that is to leverage the home for hospitality.”

For example, the Wallars, who intentionally live near student housing, host a bonfire at their house on Tuesday nights. Says Robin, “I meet people on the street and say, ‘Great to meet you. By the way, we have a bonfire at our house on Tuesday nights. You’re welcome to come and bring friends.’” They build relationships, and then invite anyone who shows interest to a Bible study.

“We create intentional spaces that we can invite people into,” he says. “We live as missionaries to our culture. We don’t think of what we do as that special. And if you have hundreds of people thinking that way and living that way, it can have incredible impact for evangelism and discipleship.

“No one falls under a special rule where they don’t make disciples,” he says. “We believe that church planting needs to start with evangelism. Come to know Christ, we’ll disciple you—and we’ll send you out.”

This approach puts the priesthood of all believers into practice. Anyone from the communities surrounding the church’s campuses is welcome to join, and faculty, staff and students now make up a minority of the church’s membership.

Over time, LIFT Church has figured out a funding model that works. Roughly half of the church’s expenses are internally funded by students. The other half is funded by partners outside the church, mostly alumni or parents of students impacted by the church. Plus, as noted earlier, most staff members work bivocationally.

In 2022, the church is dreaming bigger, eyeing expansion to 26 campuses by 2026. They’re believing God to enable them to buy a building within an easy walk of the McMaster University campus, a place where they can focus on training.

“We train at several levels,” Robin says. While much of the teaching can occur by video, such as the leaders-only training time on Thursday evenings, the facility will also train yearly cohorts of missionaries before they’re commissioned to begin, lead, mobilize and send out even more Simple Churches.

ECFA is launching a historic, cross-denominational survey on the state of church planting in the U.S. and Canada. Whether you’ve been part of starting a new church or just want to learn more, please participate. If you’re reading this article during March–April 2022, please contribute your thoughts, and as thanks, you’ll get a report on what everyone else said, plus other helpful tools. Go to Research.net/R/OutreachMag to participate.