Home Features A Church for the Nations 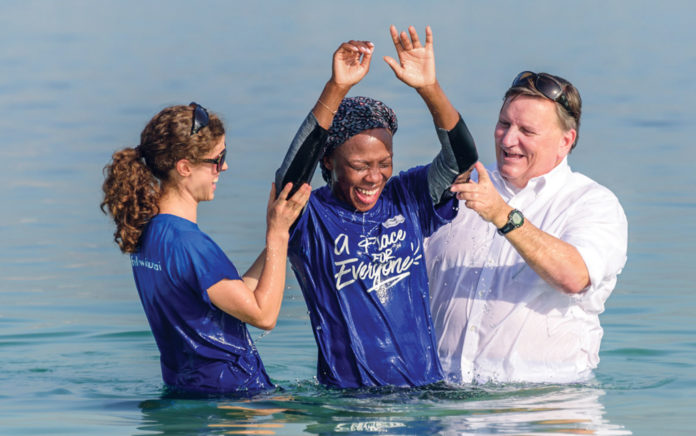 A Dubai church serves as a hub for the gospel.

The problem with many overseas churches that are led by Americans is that they end up becoming a cultural orphan. They predominantly draw expatriates who want to hang out with each other. Meanwhile, their pastor serves largely as a chaplain to the already convinced.

Not so with Fellowship Dubai, a church of roughly 4,500 based in the fast-growing United Arab Emirates city of Dubai on the southern shore of the Persian Gulf.

“We are a church for people who think they don’t like church,” the website prominently affirms, and the church’s culture seeks to flesh out. Led by Pastor Jim Burgess, Fellowship Dubai has created an intentional identity not just of an international church but also as one serious about helping its members take the gospel to the nations.

“Not only do we want to tell people about Jesus, we also want to train and equip them, and send them back to their home countries to carry the message of the gospel,” Burgess says.

WILLING TO BE UNCOMFORTABLE

Burgess traces his journey to Dubai back to an Urbana missions conference at which Billy Graham spoke. One of Graham’s sermons convicted Burgess, particularly the line “Someday you will carry the message of the gospel outside the United States to a hungry and desperate world.”

“Someday I’ll run into Billy Graham in heaven, and he will ask me, ‘You made a commitment; what did you do with it?’” Burgess reflects.

In 2008, after many years of pastoring, Burgess and his wife Alanda sensed the hand of God stirring in their lives. “Alanda had prayed, ‘Lord, send us to the place where we could do the most good in the least amount of time with the time we have left.’ Those words changed my life more than any other prayer.”

Through various circumstances, the Burgesses moved to Dubai, a city that has become a global hub for business as well as a popular tourist destination. They joined a small Bible study of about 30 people that had just started at a church. What followed were many decisions that have helped the church not only to grow, but also to become truly global in appeal and impact. Five of the most important decisions involved:

From Day 1, the Burgesses worked hard to keep the focus outward, trying to minimize transfer growth from other churches. “The thing that made Fellowship different is that we had a very welcoming, outreach-oriented philosophy,” Burgess says. “My wife and I had a burden to make an environment for people who were non-Christians or who had had bad experiences with religion, and we wanted to counteract it.

“We regularly say, ‘Everyone is welcome at Fellowship, no matter who you are or how angry you might be with God.’ Otherwise it’s kind of like telling sick people, ‘Don’t come to the hospital,’” Burgess says.

He says he wants to avoid a lifeboat mentality of keeping people safe until they return to their home countries. Instead, Fellowship Dubai wants to have a “riverbank” approach—where people can come by and not feel threatened or pressured, much like Paul and Silas demonstrated in Acts 16:13–15, when they hung out at the riverbank and had opportunity to share the gospel with Lydia and others.

“We quickly involved people of other nationalities in the leadership,” Burgess explains. “We didn’t want to be an American church in Dubai. Having an international staff is certainly a piece of how God has helped us grow.”

A look today at the church’s staff shows quite a range of nationalities. The No. 2 leader is from Australia. The pastor of their second campus is from Kenya. “He’s the best preacher many have ever met,” Burgess says.

“A big value when we started was to not put people in cliques,” Burgess says. The church’s ministry teams, both on and off stage, are a mix of nationalities and economic backgrounds. “By not focusing on race and ethnicity, placing little emphasis on caring where people are from, we get to know them as individuals and help them grow in Jesus,” he says.

This approach has not always been easy. “You can imagine the number of religious backgrounds represented by 200 different nationalities,” he says.

At the same time, language issues cannot be ignored. The two official languages of Dubai are Arabic and English. Besides English, the church offers a Russian-speaking, Urdu-speaking and Japanese-speaking ministry. Soon worship services will be simultaneously translated into as many as nine different languages.

“But our objective has been for everyone to feel part of one family,” Burgess says.

Burgess is quick to observe what he calls a “dearth of theological training” among lay leaders at Fellowship Dubai. The various church-sponsored training opportunities are building toward an internship-apprenticeship program. “We want to pepper the international church with these people,” Burgess says.

The church’s website, with sermons available on video, has had a global impact. “So much of this part of the world lacks churches they can attend,” Burgess says. “The reach of the internet is growing to every corner of the world.”

Operating in a country that is officially Muslim, the church must understand anticonversion laws and be sensitive to the local culture. Fellowship Dubai holds all worship services on Friday, since that is the local day of worship. Both church campuses meet in rented facilities, arrangements that demand that the church—even in its size and growth—always play the role of gracious guest.

Even those considerable challenges have not diminished the opportunities represented by the burgeoning expat citizenship. (About 85% of Dubai’s 2.8 million people are expatriates.) Most people who come to Dubai are interested in becoming more international, and what better place to find meaningful international relationships than in a picture of heaven with “persons from every tribe and language and people and nation” (Rev. 5:9)?

“God is doing powerful things around the world,” says Burgess. “It’s amazing what God can do when no one cares who gets the credit.”