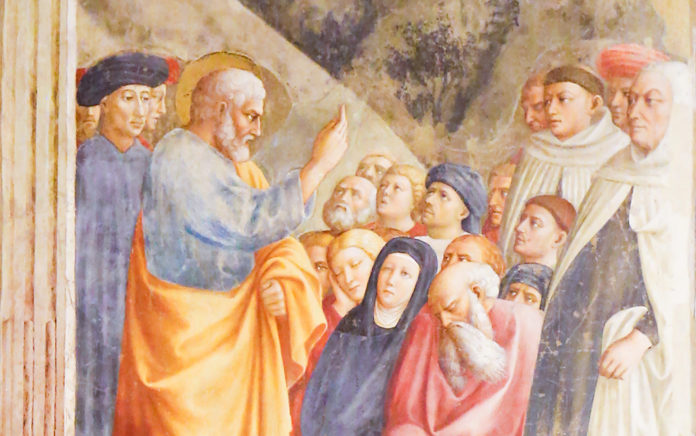 How the church has thrived through historical pandemics

“We are living in unprecedented times.”

This cultural moment where a global pandemic, economic uncertainty, the resurfacing of racial injustice, civic unrest and a bitterly-divided election season are all colluding together at the same time may in fact be without precedent. But pandemics are nothing new. Epidemics have swept through the world before and the church has not only survived them, but thrived.

But a creeping despair about the state and future of the church in North America is on the rise. David Kinnaman who leads the Barna Group said it is possible that as many as 1 out of every 5 churches may not survive the disruption of the coronavirus pandemic.

According to The Christian Post, Kinnaman explained that “there had been a drop in belief among pastors that their churches will survive the pandemic, going from 70% responding that they were ‘very confident’ early on to 58% responding the same more recently.”

I don’t doubt the church’s survival or even the survival of the local church where I serve as a staff pastor. To my core I believe in one holy catholic and apostolic church, and I believe in Jesus’ promise that the gates of Hades will not prevail against the church(es) that Jesus is building. But I have concerns about how the home quarantine and the increased use of digital technology will affect how we think about the church in the future.

Recently, I experienced a surge of hope in reading Rodney Stark’s The Rise of Christianity as he described how the epidemics of the Roman Empire during the second and third century provided a catalyst for the church to expand and mature during that time. Stark estimates that by 300 AD Christians comprised 10% of the empire. The church walking in the footsteps of Jesus during epidemics contributed to that growth.

In the mid-second century, a 15-year long pandemic took the lives of one-third to one-fourth of the Roman Empire. A century later, the “Plague of Cyprian” swept through the Roman Empire, killing approximately 5,000 people a day. Historians have named this plague after Cyprian, Bishop of Carthage, because he documented the symptoms related to the hellish plague in his short treatise “On the Mortality.”

These epidemic outbreaks and the subsequent panic and dread in the Roman Empire created the cultural environment for followers of Jesus to live what they believed. The pagan world took notice. We can learn from these Christians. We can take hope that if the early church could endure and persevere during the uncertainty of epidemics, so can we.

Here are five things we can learn from those early Christians who lived through epidemics that can give us hope as we face the lingering coronavirus pandemic in our day.

1. They Cared for the Sick, Both Christian and Pagan, Even Risking Their Own Lives.

Kindness and benevolence were known in the Greco-Roman world, but they were not valued. According to Stark, “It was not that Romans knew nothing of charity, but that it was not based on service to the gods.”1 The gods of Rome required acts of worship and devotion given to the gods themselves, but the God revealed in Jesus taught us to worship in the context of justice.

From Outreach Magazine  Gary Thomas: When to Walk Away

In other words, followers of Jesus demonstrated their love for God by loving others. They loved by tending to the sick; many of them contracted the disease themselves and some even died. They cared for the sick and not only their sick Christian neighbors, but their pagan neighbors as well. While we don’t want to spread coronavirus by carelessly coming into contact with people who are infected, we do want to care for the sick. We can reach out to our friends and neighbors who are sick, pray for them, and express our love and concern.

2. They Offered Answers and Consolation in the Form of a Meaningful Life.

The content of the pagan religion of Rome had no palatable explanation for why the empire had been struck by epidemics and they had no cohesive hope regarding what happened after death. Christians had answers, but they were not the trite, simplistic, determinative answers that collapsed under the scrutiny of Greek wisdom. The answers they offered were rooted in the life of God made known in Jesus and by the coming of the Spirit.

Jesus brought meaning both to the lives of peasants and the aristocracy. Those who had passed through the waters of baptism experienced new life and God’s new world breaking into the old. Their lives had meaning beyond their citizenship, social status or gender. This meaningful life brought a lived hope in the face of death. We don’t offer simplistic explanations to the current pandemic, because, in all honesty, we don’t know why this pandemic is among us. We can, however, model for the world a life of faith, hope and love during the pandemic.

3. They Had a Notable Contempt for Death.

Cyprian saw the epidemic of the third century as a test of our faith. In “On the Mortality,” Cyprian wrote,

“Although this mortality has contributed nothing else, it has especially accomplished this for Christians and servants of God, that we have begun gladly to seek martyrdom while we are learning not to fear death. These are trying exercises for us, not deaths; they give to the mind the glory of fortitude; by contempt of death they prepare for the crown.”2

For Cyprian, Christians were able to pass the test because of their contempt for death. They believed Jesus had defeated sin, evil, and death itself through his death and resurrection, and they lived in the wake of the defeat of death. This contempt gave them great courage when death was all around them. We don’t live in the contempt for death in a way that makes light of the pain of those who lose people they love. Death brings a tearful goodbye to all of us. But we don’t sorrow like those who have no hope. We find a real sustainable courage in Jesus who conquered death.

From Outreach Magazine  Do You Know What Refreshes, Refuels and Restores You?

4. They Maintained an Unimaginable Joy.

Dionysius, the third century bishop of Alexandria who also lived through the Plague of Cyprian, wrote to a beleaguered church to not neglect times of celebration during the time of epidemic. For Dionysius it was “a time of unimaginable joy.”3 The unbreakable joy of the early Christians set them apart from their pagan neighbors. Times were indeed difficult. Members of their family had lost their lives to the dreadful disease spreading through the empire, but their joy could not be hidden.

This form of joy wasn’t the kind that came from mere entertainment. It was a joy born of the Holy Spirit as an outworking of their salvation whereby death had been defeated. The coronavirus pandemic of 2020 has been hard. It’s been hard for me. I have had to fight for joy in the midst of what some have called an “ambiguous loss.” The truth is that suffering comes to all of us, but as followers of Jesus, we can suffer with joy. Jesus came, after all, to make our joy complete (John 15:11)

5. They Maintained a Bond With One Another.

The shift to online services and the dependence on Zoom, FaceTime, and Skype has been helpful, but virtual “community” is a shell of the kind of embodied community Jesus has called us to live in as disciples. As Pastor Tara Beth Leach has often repeated, “I need you; you need me; we need you; you need us.”

We need not trade in real flesh-and-blood gatherings (when safe) for hanging out online with our friends. It is precisely during a global pandemic that we need to work on the bonds with our brothers and sisters in Christ. And where it is not prudent to meet together for worship, small groups, or lunch meetings, we can at least send texts and make calls to strengthen those bonds until this pandemic is behind us.

[1] Rodney Stark, The Rise of Christianity: How the Obscure, Marginal Jesus Movement Became the Dominant Religious Force in the Western World in a Few Centuries (New York: HarperOne, 1997), 88
[2] Stark, 81
[3] Stark, 82
[4] Stark, 91
Share on FacebookShare on Twitter