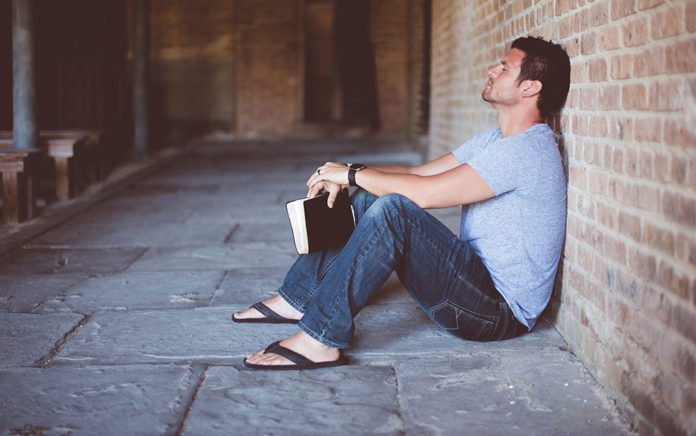 When you can’t see, trust the character of Christ.

Florence Chadwick, the first woman to swim the English Channel, decided in 1952 that she wanted to swim from Catalina Island to the California coast, about 26 miles. No woman had ever done that before.

It was very foggy when she started her swim, and she couldn’t see. After 15 hours in the water (yes, you read that right), she looked up at her mother in the little boat beside her and said, “Mama, I can’t make it; I can’t go any further.” Her mother tried to encourage her, but, after swimming for another 55 minutes, she gave up and got in the boat.

A couple minutes later, she discovered she was half a mile from the coastline.

When asked later why she quit, Chadwick said, “It was because I couldn’t see anything. If I could’ve just seen the coastline, I know I would have made it.”

Two months later, she got back in the water, and not only did she swim from Catalina Island to California, but she also beat the women’s world record for that distance.

By two and a half hours.

Interestingly, the second time she swam, it was even foggier than the first time. She couldn’t see anything. When reporters asked her about it afterward, she said, “I was ready this time. And it’s real simple: I kept a picture in my mind of the shoreline. Even though I couldn’t see it with my eyes, it was ever before me. I never lost sight of the California shoreline, and so I felt like I was always closing in on it. As long as I lived for the picture in my mind, I could keep slogging through the fog of my challenge.”

We need this kind of vision when we have unanswered questions about things that don’t add up. As a pastor, I can tell people what the Bible says, but my heart is not always at peace with it. And there are times I sit with people in pain and think, “God, if you love this person, why would you let this happen?”

But I see revealed in the gospel the evidence of God’s goodness. And I think of the words of that timeless hymn, “For I know whom I have believed, and am persuaded that he is able to keep that which I’ve committed unto him against that day.” And I know that, just like he came out of the tomb when everyone thought he was gone, one day he’s going to return and make all the sad things come untrue.

One of the things I hate is when a worship leader asks, “How does everybody feel this morning?” How do I feel? That’s where we are going to start? It’s Sunday morning at 8. I feel terrible. Things are going wrong in my house. I’ve got bills I’m not sure how to pay. My kids have me holding on by my last string. I feel overwhelmed and confused.

Instead of asking me how I feel, why don’t you tell me what I should know? Tell me about him in whom I have believed and can trust. I feel terrible, but I know he is faithful.

Worship is not about how you feel. It’s about who God is.

I’m concerned for those who base their understanding of how God feels about them on their perceptions of what is going on in their lives. If things are going well, then God must love them. But you’re always going to misinterpret things if you do that.

God’s ways are untraceable. But his character, revealed in Christ, is undoubtable.

I don’t know all that God is doing in every situation, and neither will you. But I know that what he is doing is bathed in love because that’s who he is.

And I know that one day all of this pain and confusion will be swallowed up in a glory that will give us such joy that the suffering leading up to it won’t even be worth comparing to it.

I don’t understand why God would allow a cancer diagnosis or a broken marriage or a bankruptcy. I don’t see any silver lining to it. Candidly, I don’t even see God’s plan in it. <pBut I know who Jesus is.

I know that just as God used Jesus’ death for good and brought resurrection out of it, so will he do with this situation. Where I can’t trace his hand, I can trust his heart.

“Oh, the depth of the riches both of the wisdom and of the knowledge of God! How unsearchable his judgments and untraceable his ways! For who has known the mind of the Lord? Or who has been his counselor? And who has ever given to God, that he should be repaid? For from him and through him and to him are all things. To him be the glory forever and ever. Amen.” – Romans 11:33–36

As long as you can keep living for the picture of future glory in your mind, you

can keep slogging through in the fog of your challenge. The shore in your mind should be Jesus. He is Jehovah. He is everything you’ve ever needed. In everything you’ve felt insufficient, he’s been your overflowing supply.

For all the ways you are not, he is the great I AM. And because of this, you can worship.