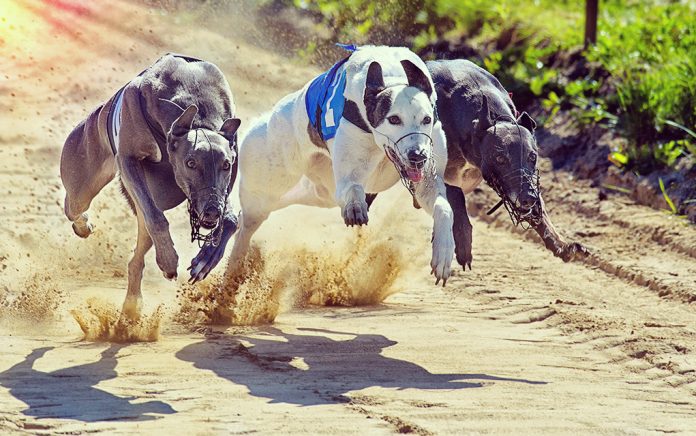 Why do we chase empty promises when God has promised us abundant life?

When Pastor Joby Martin moved to Jacksonville, Florida, one of the first invitations he got was to the local greyhound racing track.

The most interesting part of the experience, he said, is right before the race starts. They bring out a fake rabbit named Rusty and wave it in front of the dogs, and the announcer goes, “Heeeere’s Rusty!” Those dogs get pumped and start banging against the doors of the cages, itching to get ahold of Rusty. When the gates open, the dogs tear off after Rusty, rounding those corners like it’s Talladega. They get all the way to the end, and that “rabbit” suddenly disappears.

You have to imagine that later, as they’re lounging in the kennel, they’re like, “Ahh, I was so close this time!” And their friends go, “Gosh, me too! You think we’ll ever see that rabbit again?”

Sure enough, the next day, Rusty’s back. And they chase him around and around again.

If you were watching this whole ordeal, you might think, “Gosh, what dumb dogs. Don’t they know the game is rigged? They’ll never get the rabbit. Plus, that rabbit isn’t even real.”

But take a step back and look at the frenetic pace you run every day. Be honest about what drives you—and about how fiercely it drives you. If someone were watching your life, they might see some similarities with the race dogs.

Pastor Joby said, “It’s rare, but sometimes one of the dogs actually catches the rabbit. They chew through it and realize (in their doggie way), Hey, wait a minute. I’ve been duped. This whole thing is a fraud. When that happens, the dog will never race again. Its motivation disappears.”

And that’s where the dogs are actually smarter than we are. Because many of us have “caught Rusty.” We got the car, moved into the house and nabbed the corner office. But whereas the dog realizes he’s been taken, we keep up the search. Our lives say, “Well, this Rusty is not what I thought it would be, but I’m sure the next one will be.”

From Outreach Magazine  Christine Caine: Rescue the One

Paul says in Romans 6:21, “So what fruit was produced then from the things you are now ashamed of? The outcome of those things is death.” In other words, “If you see where sin led you before, why do you keep going back there?”

We keep going back because we haven’t yet understood that every master besides God leads to death.

If we are enslaved to approval, our lives will be plagued by constant self-pity, envy and feelings of inadequacy. We won’t be willing to do the right thing if it means earning disapproval.

If we are enslaved to pleasures, we won’t be able to say no to food, sex or pornography. In fact, we might become addicted to those things.

If we are enslaved to power, we become domineering, self-promoting, harsh, even abusive.

If we are enslaved to control, we’ll worry obsessively all the time. We’ll lose our temper a lot. People around us will feel manipulated, like we’re using them for our purposes—which we are.

When we allow sin to gain dominance in our lives, we start to experience death, even while we live. In Romans, death and life are not just options for the afterlife; they are conditions we experience now.

“… but the gift of God is eternal life in Christ Jesus our Lord.”

There is another Master, Paul says, who actually gives us life. He is what our souls have always been looking for. And the best part is, he doesn’t require you to work to obtain him. He gives you his acceptance, security and joy as a gift.

You see, every other master besides God threatens, “If you don’t work enough for me, I’ll make you miserable.”

Money says, “Fail to obtain me, and you’ll be poor and cursed. If you don’t work hard enough or are not smart enough, I’ll curse you.”

Relationships say, “If you don’t find the right person, you’ll be miserable. If you are not pretty enough or skinny enough or charming enough, I’ll make you lonely and miserable.”

God is more secure than money, and he promises to supply all our need according to his riches in Christ Jesus. His stock never crashes or dips below 10,000.

Knowing God is better than earthly power. What greater power can there be than to know that the sovereign God who controls every molecule in the universe has commandeered them all for his good—and ours?

God is better than physical health, because he offers abundant life, no matter the circumstances, and eternal life that can never be taken away.

The free gift of God is eternal life. Not just everlasting life after you die. But a different sort of life now.