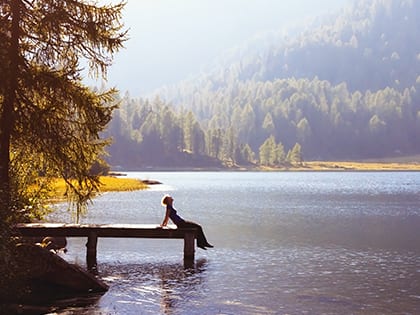 “When it comes to prayer, the most important part isn’t speaking. It’s listening!”

My wife says sometimes I talk too much. It’s a little embarrassing to admit, but I know it’s true. If you have a pulse, I can and will talk with you. A lot.

“You need to give others a chance to talk and just listen,” she’ll tell me.

This is good advice for having a conversation with a friend, coworker or stranger. I mean, it’s a basic social norm and a common courtesy that one acquires by the age of five. It’s important to listen to others, to give others a chance to speak and share, to give each other a turn to talk.

But it’s also good advice when it comes to prayer and talking with God.

To give him a turn.
To give God a chance to speak.
To listen to him.

While many of us, especially us extroverts, are good at talking with people, we often struggle when it comes to speaking with God. Prayer can be overwhelming for many because we don’t know the words to say. That said, when it comes to prayer, the most important part isn’t speaking. It’s listening!

Listening and giving God a chance to speak isn’t just good advice, it’s necessary and vital to having a true conversation with God.

Now, we can hear from and listen to God at any place and at any time, but we must know what the voice of God sounds like.

The best place to start knowing his voice is by opening up the Bible, by seeing his words come alive. As we read, we come to understand the character and heart of God. We come to know his promises and truths, his ways. We see what God has said in the past, which gives us a good idea of what he’ll say to us today. And what he won’t say to us. We come to know what his voice sounds like.

From Outreach Magazine  Letting Go of a Defeatist Theology

Unlike we naturally assume, when God speaks in the Bible it’s often not in a loud booming voice from heaven that stops traffic. Instead when God speaks, he does so using a still, small voice.

Instead of brashly breaking into our lives, he stands at our front door and gently knocks. Instead of shouting when we don’t listen, we’re told that he draws us to himself with his kindness, not his anger.

When it comes to hearing from God, often the main question that we need to answer is the most basic one: Do we want to hear from him?

If we do, we need to give God the space and room to speak.

More practically, invite God to speak and then be quiet.

Turn off the noise. Instead of checking Twitter between meetings, be still for three minutes and listen.
Get into the Bible. Again, we have to be able to recognize God’s voice if we want to hear it.
Declutter your life. Is every ounce of your day full (including every evening and weekend)? Good luck hearing from a God who whispers and quietly knocks.

If we want to hear from God, we need to give him time.

Time to share.
Time listening.
Time and availability to speak into our lives.

We just need to listen.