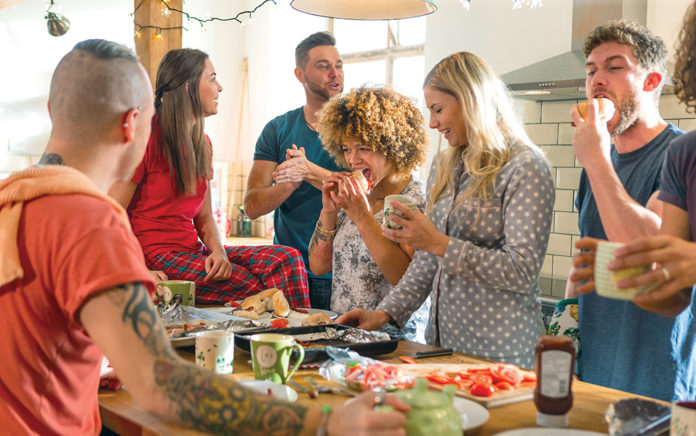 What if existing churches became a platform for microchurches?

While the conversation about finding more effective ways to be a seven-day expression of the church in North America was already underway, the coronavirus outbreak forced thousands of churches to rework how they gathered and, more importantly, to rethink who they are.

Exponential gathered three leaders who have led this conversation to help church leaders reimagine what the church and our world could look like after the COVID-19 pandemic: Daniel Yang (moderator), director of the Send Institute; Ralph Moore, founding pastor of Hope Chapel in Hermosa Beach, California; and Rob Wagner, a leader in the Kansas City Underground, a decentralized network of reproducing disciples, microchurches and a collective for congregations.

Yang: Let’s start with an obvious but important question: What is a microchurch?

Wegner: In the Kansas City Underground, we have a mission agency and a network of microchurches. Our mission agency equips normal folks to be loving missionaries and effective disciple makers in new contexts. As you make new disciples in a new context, a microchurch emerges. So you don’t plant microchurches per se; you plant the gospel. As new disciples are made, a new spiritual family emerges. Our definition of microchurch is an extended spiritual family led by ordinary people who are seeking to live in everyday gospel community.

Do they have meetings? Yes, but is it about a meeting? No, it’s about a family on mission. And the last part is they own the mission of Jesus and a particular network of relationships.

Moore: We think that microchurch is the next expression of the church. I see the book of Acts as a continuum, with the church moving from an initial, immature stage. Then you see it shift as ordinary people escape Jerusalem, making their way to Antioch. We’ve read the book of Acts looking for 3,000 or 4,000 people in a church. But I think it’s trying to move us toward a church that gets into the small places.

Yang: What are the organizing principles for a microchurch?

Wegner: Worship, community, mission. In the Underground, we have something called the missionary pathway with five phases: extraordinary prayer and fasting, live like a missionary, plant the gospel, microchurch emerges and multiplication. We probably have 25 disciples who are now following Jesus together in our neighborhood. We also have microchurches. One is among the youth rodeo circuit of Kansas. Recently, two women got baptized in a horse trough at the rodeo. The microchurch is going to look different. For example, if you and I were going to Papua New Guinea as missionaries, you could land on an island and see maybe 200 different tribes in a very small geographic space. We would know right away that we couldn’t have a weekend service with children’s ministry and expect these 200 tribes with different dialects and history to come. Some of these tribes hate each other. But if we sent missionaries to live among them, we could have 200 microchurches emerge. And we’re saying that is the context in America now: The microchurch allows you to be able to plant the gospel and then have a unique expression.

Yang: Can we apply the microchurch to the season we find ourselves in now as we continue to recover?

Moore: The pandemic and our response to it set us up because so many churches learned how to do worship and small groups online. And I think it will mark the church in the future. Before, people were resistant to the concept of microchurch or imagining their church as a platform for microchurches. In the long run, the church will benefit from this. We’re going to be kind of pushed into microexpressions of the church and then give it two or three years to incubate. And we’re going to see a different church than what we’re looking at today.

Yang: As you think about larger churches, would you say this is a time for them to reimagine themselves as a mission agency?

Wegner: The economic situation is changing for the church, and we’re not going to be able to support these big facilities. But we could reimagine ourselves as a platform. I think of the two words: portal and platform. Netflix is a portal. They have an offering, and people can come and choose. That’s kind of what we do in our churches right now. On an internet platform, for example, you can build whatever you want on it. If we begin to think of our churches as a hub and see ourselves as a platform, a church can create a network of microchurches very quickly as opposed to the cost of running one large congregation.

Yang: How do you make sure that everybody who’s coming in is on mission with you?

Moore: You keep starting new groups as quickly as possible. Everybody’s an apprentice, and we see everything as a continuum. You should always have people ready to hive off. It’s pretty simple. Once you set your mind to it, it’s a paradigm shift more than a complicated process.

Wegner: As a practical example of that, basically all of our microchurches use a simple Bible study that you can train someone how to do in about 15 minutes. It teaches people to go to the text, then listen to the Spirit, and it builds immediate obedience because you’re asking, “What are you going to take out of this?” And then we always stop and say, “Who are you going to share this with?” We rotate leadership. What people discover is they can lead a Jesus-centered gathering that’s grounded in the Word of God, that is Spirit-inspired and leads to obedience and reproduction. If you structure things so they’re simple and reproducible, you can quickly send people into other mission contexts, because they’re seeing they don’t have to be a preacher or teacher.

Yang: For leaders who have wanted to reimagine their church in this way, what are some helpful tips for beginning to think of themselves as a network of microchurches?

Wegner: You need to shift from more volunteers to more masterpieces. Typically, when people think of ministry, they think they’re being invited to be a volunteer in a program. And that is an important step. But the problem is it’s also a radically reduced definition of what ministry is. The end goal is not volunteering but discovering your Ephesians 2:10 masterpiece mission. Most churches have moved to some kind of gifts-based evaluation for volunteerism. But we can expand that and make it about discovering your masterpiece mission where you live, work, learn and play. The second pivot I would make is toward small groups. Church leaders should consider what microexpressions are already in place. I guarantee you have them. It might be Sunday school class or it might be small groups. Don’t see these groups simply as flypaper to grab people on the backside of the weekend. See them literally as the tip of the spear or mission in every neighborhood and network in your city.

Yang: How do you intentionally build multiplication into your network? Your microchurches?

Moore: Some of it is just repetition. What gets said over and over and what gets reported gets done. So we’re asking, “What are you doing? Who are your apprentices? Who are you raising up? When are you going to start?”

Wegner: You try to look at all of your discipleship tools, your patterns and rhythms, and make sure multiplication and reproduction is normative at every level. Let’s reposition the church from a thing that says, “Come here and support my idea” to “How can we support you out there and touch the world that’s being largely untouched right now?”

To watch the entire webinar or sign up for other webinars or collaborative conversations go to Exponential.org and click on the Resources tab.