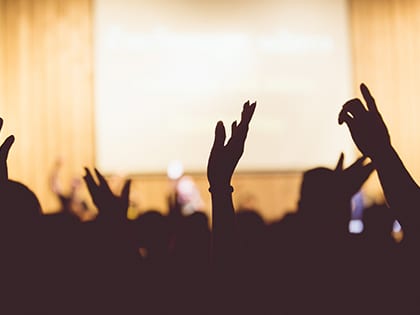 “As a worship leader, you should be leading people to worship with you, not merely in the same room as you.”

A few weeks ago, one of our leaders asked me to come speak to a group of worship interns, telling them “everything I thought pastors wanted worship leaders to know.” When I agreed to do it, I thought it would be a stretch to come up with three or four things. That was a bit naïve. By the time I was done, it grew to a list of fourteen!

I’d love to see a corresponding list of “What Every Worship Leader Wishes His or Her Pastor Knew,” but for now, here is my advice for growing worship leaders:

1. Teach the people how to respond in worship.

Our impulse is to blame the congregation for being too cold. But as leaders, we need to assume that the fault lies with us. If people aren’t responding to God in worship, the easy way out is to gripe about the people. The leader’s way out is to ask how we can disciple people to grow.

Responding appropriately in worship is something that has to be taught. In fact, the Bible commands postures of worship. Part of your job as a worship leader is to do something similar with your people, calling them to the postures of worship that we see commended throughout Scripture.

On the practical side, it helps if you start by teaching those who have already bought in to the mission. Teach the staff and leaders, then lead in concentric circles.

2. The posture guides the heart.

We were created as holistic beings—with intellects, emotions and bodies all working in concert with one another. Studies show that anywhere from 70 to 95 percent of communication is nonverbal. We say a lot about what we think and feel without uttering a single word.

This is why the Bible commands us to kneel, stand, sing, shout and lift our hands. It doesn’t say, “Shout to the Lord if you have that kind of personality and the mood strikes you.” It simply says, “Shout.” Our hearts often guide our posture in worship, but it is equally true that our posture guides our heart.

The objection I hear to this is that people don’t want to be inauthentic. But that’s not a great way to approach the commands of God. I don’t say, “It would be hypocritical for me to be faithful to my wife, since my heart often desires adultery.” No, I oppose the sinful desire and choose the godly one, because obedience shouldn’t rise and fall based on feelings.

3. Your people need a pastor, not a performer.

By this, I don’t mean that you should intentionally sing poorly—any more than I, as a preacher, would intentionally speak poorly. But you aren’t there to simply sing in front of folks. Don’t hide backstage before and after the service. Get out there and mingle with people. Be available. As a worship leader, you should be leading people to worship with you, not merely in the same room as you.

4. Talk with your pastor about what you’re trying to do.

The more you talk with your pastor about why you want to do a certain song (or avoid one), the further you’ll get in actually achieving your goals together. Worship should be a rhythm of revelation and response. Once you and your pastor agree on that, the specifics of songs and sets becomes easier to manage.

5. It’s not illegitimate to take audience mood into consideration.

You aren’t a performer. I’ve made that clear. But don’t be so “theological” that you ignore the artistic side of leading worship. You’re dealing with music and singing, which brings certain sociological elements into the picture. So don’t be surprised if you do three slow, soft songs in a row and find your people checking out. They aren’t necessarily being unholy. They’re following the mood you set.

There’s a reason we generally start off with a more-upbeat song in our services, rather than a contemplative and mournful one—just like I usually start my sermons with an illustration. You can easily go overboard on this, but don’t ignore it altogether. Setting the mood and using artistic style is one way of honoring God with your talents and leading your people well.

I know that not every worship leader prides him or herself on public speaking. But you will be doing some speaking up there, so be smart about it. If you find yourself saying things to the crowd that are more befitting of a rock show (“Come on, I can’t hear you!” or, “Are we ready to have some fun?”), maybe you should write out precisely what you want to say. After all, if the lyrics to the song are scripted, it’s not a terrible idea for the lyrics to your introduction to follow a pattern, too.

This is as true of a sermon as it is a worship set. In the planning stage, it all makes sense. But then you get into the service, and a spark of intuition tells you, “The last song we planned doesn’t fit. We should be slowing down and giving people space, not amping up and trying to be triumphant.” It can be maddening for everyone around you if you do this too much, but you need to have some flexibility to change the plans.

And, at the risk of stating the obvious, to read the moment you need to be there for the moment. Often worship leaders will do their songs at the beginning, leave and then return for a song or two at the end. Nothing is worse (or more obvious) than when the worship leader wasn’t there for most of the service. What you say and sing at the end should dovetail with what came before. So, you know, be there for that.

It’s a common temptation for worship leaders to step up after the sermon and feel the need to say a few things before launching into their songs. Resist. If the preacher knows what he’s doing (even if he doesn’t), his sermon will end by leaving people worshipping. Your job is to take that handoff and to worship. One brief line does the trick, and then you should get into the music.

This doesn’t mean you should refrain from speaking or preaching at all. There are several other moments when a short “sermon” from the worship leader works well. But to jump from one sermon immediately into another, shorter one doesn’t help people digest what they’ve just heard.

9. Guard the time for preaching.

I’m aware of the irony here. I’m a preacher, so this may sound self-serving. (Like I mentioned above, I’m ready to receive words of wisdom from worship leaders to us preachers.) But as Protestants, the preaching of the Word has been and should be the centerpiece of the service. It’s the reason most of us choose to come to church: We want to hear from the Word of God. Keep that element of the worship service in mind as you struggle to balance singing with teaching.

10. No one is as enamored with your music as you are.

We write a lot of our own songs at The Summit Church. I think they’re incredible, and I want more of that. I think more worship leaders should be trying their hand at their own stuff, offering it to their congregations as a way of contextualizing and applying the gospel to their context. But it’s easy to buy into your own hype a little too much.

From Outreach Magazine  Drew Hyun: He Must Increase, I Must Decrease

Balance your songs with music from the broader church—both contemporary songs and hymns. And don’t take yourself too seriously. The mission is serious, and we should care deeply about it. But we are servants, and we should think of ourselves rather lightly.

Part of your calling and unique gifting is to push and challenge the congregation; that includes in the style and forms of music you use. But remember that you’re likely to be surrounded by more artists than the average Joe in your pew, so what you think is “pushing it a little” will often seem like dramatic and horrific change to many people. Be patient with them, and know that they aren’t trying to stifle your creative spirit.

When I get sick of saying something around our church, I find that our people have just heard it. That’s how leadership and vision works. It works the same for music, too. For songs to stick in people’s hearts and minds, they’re going to have to hear them a lot. You’ll get sick of those songs right around the time people start to really ingest them and love them. Stick it out for their sake, and don’t shift too rapidly.

This is probably good advice for a lot of roles. Assume the weaknesses, and notice the strengths. I tend to do the opposite, pointing out other people’s weaknesses and assuming their strengths. Flipping that pattern is a discipline but one that bears a lot of fruit.

My wife is my biggest preaching fan. She knows I don’t always do well, but she also knows that I have other people intentionally critiquing my preaching. So she lets them do it and just “notices the positive.” You should probably assume a similar posture toward your pastor. If he feels like you are his biggest fan, it will be a great long-term relationship. If he senses that you have a long list of ways he could improve things, you aren’t setting anyone up to succeed.

We strive for alignment in our services, but that goal can easily become too all-encompassing. Let the theme of your service or your series serve you, rather than serving it.

14. Don’t always ask the pastor what he’s preaching on.

In the spirit of alignment, many worship leaders want to know specifically what the sermon will be about so that they can arrange the worship around it. There’s some merit to this. But as I often tell our worship leaders, “Any sermon that doesn’t end in communion is a bad one.” Charles Spurgeon encouraged preachers to always plow a trough back to the gospel at the end of every sermon. I try to do the same.

The gospel is the power to do whatever the Word commanded, so every sermon should end there. The thing is, not every sermon does end there. This is one way that worship leaders can help their pastors. If he or she has limited time or doesn’t make the gospel connection abundantly clear, the songs following the sermon can point back to the gospel as the source of power.

That’s all I’ve got for now! What would you add? And which worship leader wants to step up to the challenge to write “What Every Worship Leader Wishes His Pastor Knew”?

J.D. Greear is the lead pastor of The Summit Church in Raleigh-Durham, North Carolina and the author of several books, including Gaining by Losing: Why the Future Belongs to Churches That Send. This article was originally published on JDGreear.com.