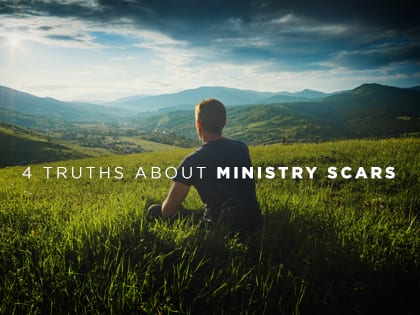 “Surely, we think, serving the Lord’s people will bring an unending succession of joys and accomplishments.”

At Mississippi State University, a Kenyan student carried horizontal scars across his face. “Identification marks for my tribe,” he explained to me. Wow. Tough clan.

We were returning from the cemetery in the mortuary’s station wagon. The director and I were chatting and perhaps could have been more observant. We did not notice the pickup truck coming from our right and running the stop sign at 30 or 40 mph. We broadsided the truck.

My forehead broke the dashboard. I bled and bled. And got a ride to the hospital in the EMS van.

The emergency room staff decided I had suffered no serious injuries and taped up the two gashes in my face. At the wedding rehearsal that night, I sported a large white bandage on my forehead, just above the eyebrows. It made for some memorable wedding photos the next day.

That happened over 30 years ago, and I still carry the scars. Interestingly, no one notices that they’re scars. They’re situated in the same place one might have frown marks. But if you look closely, you can see they are scars.

I would not have those scars if I were not a minister.

My wife, Bertha, tells me her late husband Gary had scars in the same place, also acquired during ministry work:

“We were walking to our church in the French Quarter (New Orleans),” she said. “Suddenly, a woman screamed and ran toward us, yelling, ‘Don’t let him get me!’ Behind her a car was coming. Apparently, someone—her husband, someone—was after her. Gary handed me our child and told me to get back. He positioned himself between the woman and one very angry man. In the scuffle, the man hit Gary right between the eyes, causing a deep gash.”

Bertha said, “I don’t remember what happened next, and know nothing of the outcome of that couple. But we had to go to a clinic quickly. Gary carried the scar from that fight the rest of his life.”

Ministry scars. Everyone in the Lord’s service will bear them sooner or later.

I recently shared an article from the 2001 issue of Leadership Journal telling of our difficult three-year pastorate of the late 1980s that resulted in my abrupt departure and a year’s hiatus between churches. Soon my mailbox filled with pastors and other ministers sharing their stories. There is so much pain; so many scars.

In Word Meanings in the New Testament, Professor Ralph Earle comments on Galatians 6:17. The word stigma, usually translated as “scars” or “brand-marks,” derives from the Greek word meaning “to prick,” as with a sharp instrument. He says:

“Brand-marks were carried especially by domestic animals, slaves, criminals, and later soldiers … And since Paul often refers to himself as a slave of Jesus, this may be translated as ‘I bear in my body the brand-marks of the Lord Jesus.’”

What exactly were those marks? Earle thinks Paul is referring to actual scars and wounds. After all, the price he paid for serving Jesus—see 2 Corinthians 11:23-28—surely would account for numerous physical marks left on his person.

1. Some of the scars on our souls are simply from sharing the pain our people were experiencing.

I was awakened at 4 a.m. by the wife of a medical doctor. Her husband was at the hospital with a young couple from our church. “Charles just called,” she said. “He said, ‘I’ve lost Millie’s baby and now I’m losing Millie.” He wanted her to pray. I threw on some clothes and dashed to the hospital. Four hours later, I entered the labor and delivery room with the brokenhearted husband as he looked upon the face of his dead wife holding the lifeless infant in her arms. I weep today at the memory of it.

Susan had grown up in our church and been the life of so many youth activities. She was born late in life to her devoted parents, wonderful encouragers of their pastor. Susan went off to college, majored in art and took a job in a New York City art store. One day while alone in the store, she moved a huge sculpture into place and turned away to other tasks. The massive piece fell on her and crushed her skull. She never knew what hit her. Because we had a wedding at our church that Saturday afternoon at 3 p.m., her funeral was held two hours earlier at the Methodist church a block down the street. I went from one to the other, my heart breaking, my soul in tears.

I had to call on a beloved senior lady in our church to break the news that her only daughter had taken her own life. I recall every detail of that visit and every word that was spoken, and will never forget the grief of that precious mother.

And now that I’ve started recalling these experiences, so many others clamor to be included. The little children who lost their battles with cancer. The car wrecks. The shootings. The divorces, family betrayals, drunkenness, child abuse, visits to prison.

So many scars, so much pain and hurt.

2. Some of these scars were put there by church leaders.

The deacon who stood in the foyer of the church Sunday after Sunday telling visitors and anyone he did not recognize, “You don’t want to come to this church. The pastor is a liberal!” When I asked the deacon leadership to deal with him, no one wished to tackle the job. When he refused all my attempts to meet, I wrote him a letter. That was a mistake, because he made copies to pass around and visited homes of church members slandering me. Eventually, the Lord moved him away, but not before he had done a great deal of damage.

That four-hour deacons meeting in 1989 in which a small group did all in their power to force me out of the church (told in the “Broken Pastor” article linked above). Having nothing to charge me with—the church was growing, we were running ahead of the budget, and we were having the second best year in baptisms in the last 75 years—they resorted to innuendo such as “There is a malaise in the church” and “Joe isn’t giving our church the leadership we need.”

One wonders if they realized that the malaise could be caused by their own efforts to undermine the ministry and oust the pastor! It reminds me of people who withhold their tithes, then fire the preacher because the church is hurting financially. They say, “The congregation isn’t responding to your leadership.”

I had gone four years with no raise in salary, even though I had taken a huge cut in salary in coming to that church. Finally, when the leadership recommended an appropriate raise in salary, the criticism throughout the congregation was so widespread and painful one would have thought we were committing armed robbery. To quiet the furor, the deacon-leaders asked me to go before the congregation and give a full explanation of my financial affair—what I had made in the previous church, the amount I had come to this church for, the four years of no increase and a few other things.

After my 10-minute explanation, I ended with this: “I have not enjoyed doing this. No one wants to stand up and tell everyone what he is making. You would not want to do it. And you shouldn’t ask your pastor to, either. The finance committee and personnel committee are supposed to handle these things. I want you to promise me you will never again ask a pastor of this church to do such a thing.”

The applause indicated their agreement.

Modeling Evangelism for the Church 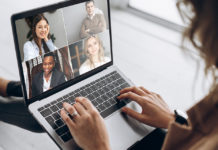 The 4 Types of People Attending Your Online Services 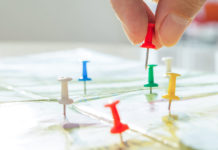 Can the Multisite Church Survive the Pandemic?