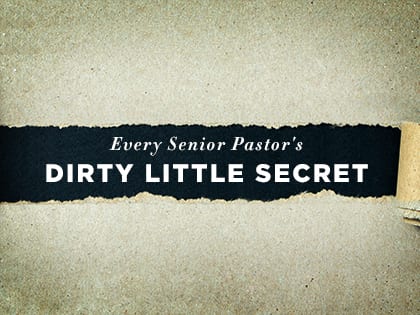 “For most, it’s a secret they’ve never shared with their staff, their churches and sometimes even their spouses.”

Over the years I’ve rubbed shoulders with more senior pastors than I can remember. I’ve talked with senior pastors of large churches, small churches and every size in between. I’ve hung out with black pastors, Hispanic pastors, Episcopal pastors, Republican pastors and yes, to my shame, even pastors who are Yankee fans. You name ’em, I’ve probably picked up their lunch tab.

When our conversations move past square footage and per-capita giving and other things that keep God up at night, we slowly let our guard down and begin to talk from the heart.

Inevitably, that’s when a well-guarded secret is shared. For most senior pastors, it’s a secret they’ve never shared with their staff, their churches and sometimes even their spouses. I know I can count on one hand the people I’ve shared it with. Until now.

Here it is: Sometimes we wish we could quit.

I think you get my drift.

You want to know what surprises me? Every time I hear someone tell me they’re firing up a resume, I am always struck by how similar the reasons are for why they are taking their hand off the plow.

Many pastors say they’re tempted to throw in the towel or move because of people. Problem people, to be exact.

I remember the first church I served at. After a few months, I was approached by a man who felt called by God to be my accountability partner—without asking me. He offered to take me out to eat one day, so I accepted.

Little was I prepared for what was about to happen. Setting down his sandwich he said, “Brian, there are a number of things you are doing wrong, but for the sake of time I’ve kept my list to 10.” I made the mistake of saying, “Start with No. 1.” Two hours later, my self-esteem had dropped by about 30 percent.

Like most ministers, I’ve regularly felt the sting of difficult people. Looking back on some of these situations, I’ve come to one conclusion: In every congregation, there are always three or four blessed souls who are there because no other church in town will put up with them.

Yes, I agree that it’s hard to overestimate the damage some pastors have done to churches. We have to own that. I know I’ve caused my share of pain. But it’s also healthy to acknowledge that many of God’s servants walk with a limp because no one in their congregation had the guts to stand up to a known troublemaker and protect their leader. It’s at those times it becomes easy to question whether the price is too high, at least for me.

A while ago I stumbled upon one of those well-known job-search websites. Supposedly it is the largest in the world—matching thousands of employers with employees everyday. I was curious, so I plugged in my education, experience and the name of the mildly prestigious divinity school from which I graduated.

Most pastors will understand my elation at clicking the button and reading a report that pointed me to a long, distinguished career at my local Krispy Kreme.

When I’ve talked with colleagues, the feeling that is expressed is not necessarily one of resentment, but of being trapped. Even if they wanted to leave the ministry, what kind of job could they get? Could they make what they’re making now? Is it too late to start over?

Try to remember the vigor and vision with which we entered seminary. I literally would have become a pastor if they told me I’d never be paid a single penny. I was sold out.

But adding a few waist sizes has helped me recognize now what I didn’t then: 18-year-old kids suffer from what author Warren Bennis in his book Organizing Genius calls “delusional confidence.” We didn’t envision the day when we would have a mortgage payment, a car with 182,000 miles on it, and one too many smiles around the dinner table that need braces.

Thank God for delusional confidence or we would have bolted to the local university midsemester of our freshman year. Nevertheless, and I’m ashamed to admit it, but you’d be surprised how many pulpits would be empty if someone offered pastors a job similar or better in pay than their current assignment.

Finally, many senior pastors get wanderlust because they have simply gotten tired of the “same ol’, same ol’.” One pastor confided in me that he thinks most of those in ministerial ranks change things in their churches simply out of boredom. If most pastors are telling the truth, they’ll admit there is more fact to that than they’d like to admit.

Now, if you’re not a point leader in a church, before you start rolling up your sleeves to throw stones, think about our typical week. Go to office. People. Problems. Study. Lunchtime. More problems. More study. More people. Leave office.

Not exactly the job for second-career NASCAR drivers. We pastors get into ruts. We get bored. We lose energy. We read the church openings.

From Outreach Magazine  3 Assurances When You Cannot Pray

On Mondays, you’ll find us on the mountaintop ready to tackle the world, but by Friday at 4:45 p.m. we’re cruising IDon’tWantToSpendMyDayOffWorkingOnAnothersermon.com.

Too often, to our shame, spending time with our Creator becomes another item on our to-do list. Ultimately, after a few years of hiking back and forth from the mountaintop to the valley and back, we ask ourselves, “Is this it? Am I wasting my life doing this? Would a move to another church cure this restlessness?”

That’s not the kind of thing you want to hear out of the person leading the charge, but more often than not, it’s the truth.

My Strategy For Pressing On

I’m not sure if this will help, but let me share a few things that I tell senior pastors that have helped me stay in the game so far.

First, realize that no matter how hard it gets, it’s only going to get harder.

That may not be what you wanted to hear, but it’s the truth. A mentor of mine once told a gathering of pastors, “Happiness is to be enjoyed like a sunny day.” Meditate on that phrase—it will serve you well in our vocation.

Look up the number of times Paul used military phrases to describe our task. Re-read 2 Corinthians and envision how that letter was written with hands broken multiple times preaching the same gospel we preach.

Where in Scripture did Jesus promise us a balanced, contented, pseudo-Buddhist journey? Take comfort in the fact that Jesus expects you to be faithful to your calling but not derive all your joy and satisfaction from your calling.

Almost two decades ago I picked up a book by Eugene Peterson called Under the Unpredictable Plant: An Exploration In Vocational Holiness. The book literally saved my ministry.

In it he described how in the sixth century monks were moving from monastery to monastery, looking for deeper spiritual communities and greater challenges. When things got too tough or shallow, they simply moved on for greener pastures. The problem of restlessness became so widespread that St. Benedict added to the monastic vows of poverty, chastity and obedience a fourth: the vow of stability.

My hope is that every senior pastor who reads this, regardless of their situation, will place themselves under St. Benedict’s tutelage.