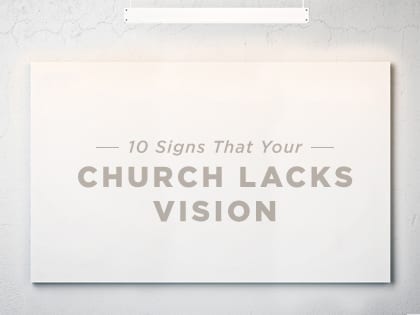 “Leaders who spend more time putting out fires than igniting sparks for ministry seldom operate under a clear vision.”

Following the leadership of Thom Rainer, I define a church vision as “God’s particular plan for a particular church at a particular time”—that is, it is prayerfully capturing what God wants to do through current leaders and laity in the current context. A vision matters, for it guides the church in all it does.

On the other hand, many churches have no clear vision. Here are some signs of this problem.

1. Nobody, beginning with the leaders, can state the vision.

That’s a sure sign that no vision exists. By the way, some churches that actually have a mission statement still face this same problem, evidenced when nobody knows the statement.

2. Leadership tends to be reactive rather than proactive.

Leaders who spend more time putting out fires than igniting sparks for ministry seldom operate under a clear vision.

They’re not a team, for a team strives for the same victory. Visionless churches can’t even state what “victory” will look like.

4. Ministries are disorganized and siloed.

They may be good ministries, but each ministry lives on its own turf. Nothing connects them, so their combined efforts don’t point toward a clear end.

5. Passions, rather than planning, ignite the church’s varied ministries.

New activities and ministries start just because somebody has a passion and a burden—not because those ministries contribute to the church’s overall goal.

That happens when a church is going through the motions of activity without a clear sense of direction and goals. Agendas fill the void that the lack of vision creates.

7. The goal seems to be to “get through the next weekend,” rather than to maximize efforts to reach the unchurched.

Everything feels like a Band-Aid on a problem rather than an exciting step toward the future.

8. Budget expenditures are a big deal.

A clear vision helps diminish budget wars, for the church knows exactly where they want to go. Where there is no clear vision, though, people begin to fight to protect their favorite ministries.

That’s easy to do when the church has no vision. Why invest yourself in something that’s only floating along, with no sense of purpose?

The most equipped leaders don’t waste much time in a church that has no direction. They leave and go to a church that knows where it’s going.