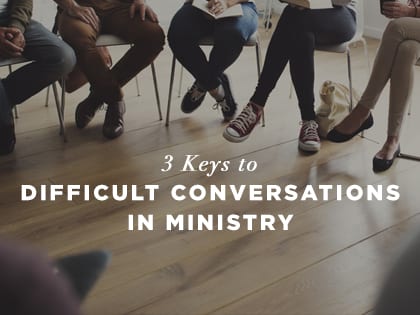 “These are hard conversations to have. But when we speak truth in love, we are doing what Jesus asks.”

In The Contrarian’s Guide to Leadership, Steven Sample says a great leader has to shoot his own horse.

Here’s the context: Sample grew up on a farm. His dad didn’t know how to farm, but that was his dream, so the family went for it. When it came time to kill an animal for any reason (mainly for food), his father would get help from the neighbor, who would kill the animal for him.

But one day, their horse misstepped and broke its leg. It was not reparable, so they knew they had to put the horse down, even though it broke their hearts. Sample’s father went to the neighbor to ask for help and the response he got was (and I think you need to read it with a Deep South accent), “Son, I’d sooner violate a man’s wife than shoot his horse! You gotta shoot your own horse!”

I guess that’s a part of country living I’ll never understand, but the principle Sample talks about has never left me. He said there are certain things a leader has to do, that you don’t want to do, but no one else can do for you.

The biggest one in my leadership is having difficult conversations. They can be needed for multiple reasons: Maybe there’s a sin issue that needs to be addressed, maybe someone is neglecting to lead as they should, maybe a joke was made that was inappropriate. Whatever the reason, it always feels the same—that sinking feeling of, “I wish anyone else would do this so I don’t have to.”

I have learned three lessons from others about having difficult conversations that help guide me when I have that sinking feeling.

As in: have the difficult conversation.

Gallup found that salespeople were quitting their job because they got a sinking feeling when they made cold calls, and they didn’t like that awkward feeling. But after more research, they discovered that people who weren’t quitting had the same feeling, they just focused on the possible reward.

When faced with a difficult conversation, you will get that pit in your stomach, but focus on the possible outcome.

Often, empathic people are the ones who avoid confrontation the most, but in my experience, those personalities are the best to have confrontational conversations, because they will do it out of a broken heart, instead of a need to be right.

A caveat to this whole topic is: If everywhere you look you see the need for a difficult conversation, find the common denominator! Be careful that you’re not on a witch hunt.

From Outreach Magazine  The Benefits and Challenges of Business as Mission

Those are hard to say! But when we speak truth in love, we are doing what Jesus asks.

Another caveat here: Don’t say the last 5 percent … PLUS 5 percent more! I’ve been guilty of this many times. Just say what you need to say—and stop.

God has called us to lead. Part of leadership is confronting people when they need correction. I have found these phrases to enable me to speak the truth in love as I lead our people to live out God’s kingdom here on earth.

Carl Kuhl is the lead pastor at Mosaic Christian Church in Elkridge, Maryland. This article is part of our From the Front Lines series, in which several church planters share what they’re learning as they lead their congregations.