Home Features 3 Steps to Racial Reconciliation in the Church 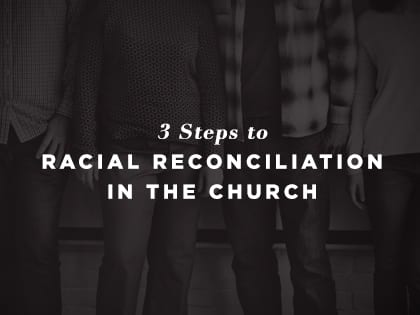 “Too many Christians jump into discussions about racial reconciliation without a firm foundation of cultural understanding.”

David was named by Christianity Today as one of “The 20 Most Creative Christians We Know” and is the executive producer of the Urban Doxology Project. His greatest honor in life is to be married to his wonderful and beautiful wife, Joy. Here is his Q&A from the recent State of Pastors monograph.

An overwhelming 98 percent of pastors believe churches play an important role in racial reconciliation, yet only half say racial reconciliation is among their own church’s top 10 priorities. Why is there a disconnect between some pastors’ awareness of the problem and their active, informed participation in the solution?

In the Scriptures God is constantly telling his people to remember where they came from and the places from which he’s delivered them. As Christians, we must acknowledge our history and understand how it has caused the problems we face today, even though doing so is deeply uncomfortable. We should never “get over it” by forgetting. Rather, we should remember and then confess wrongdoing and its consequences, and repent. Repentance is more than saying “I’m sorry”; it means doing something about it.

Where to start? Missionaries often know they are going to “cross a culture,” so they take time to understand the sociology and anthropology of the new people they will engage with. Pastors working domestically don’t often engage this same practice, so generally they don’t lead their church with strong cross-cultural intelligence. As a result, too many Christians jump into conversations about racial reconciliation without a firm foundation of cultural understanding.

We need that foundation, and we need a robust theology of anthropology, a biblical understanding of what it means to be human. For example, if we interpret the Great Commission as “saving souls,” our interactions with people inevitably contain some level of dehumanization because we have a disembodied anthropology. But if the Great Commission is about “making disciples of all the nations,” then we see disciples as whole people with bodies, souls and a place of origin. We see that discipleship is comprehensive. The Bible has a holistic understanding of humanity in which the spirit, soul and body are part of God’s redemption, reconciliation and restoration.

From Outreach Magazine  5 Ways for Leaders to Welcome Feedback

If you were to coach a white pastor on how to talk to their congregation about race, justice and reconciliation, where would you start? What are the most important things for them to know and teach?

As I mentioned, most people don’t have the theological, historical or sociological tools to deal with this heavy topic. It’s like teaching calculus to a fifth grader without giving them the proper preparation and time to mature. So here are the things I recommend to a white pastor to prepare and mature their congregation to be ministers of reconciliation in this area:

1. Be committed and intentional.

Nothing gets done right without investing time and money, and in relationships. Too often pastors try to get this work done without a cost. If a pastor is not willing to invest, it would be better for them not to start. After hearing just one sermon or even a sermon series, people revert to the status quo.

My grandmother has a saying: “You can’t come from where you’ve never been.” As a white pastor, commit yourself to be in a space of displacement indefinitely. Join some type of ethnic minority social club or gathering and don’t ask your friend to do it with you. Go by yourself and be a part of that community for nine months to a year so you can know what it is like to be a minority in a community.

3. Get organizational consulting and training from experts.

Too often, predominantly white organizations ask the minorities who are already part of the organization to help them reform. This is a bad idea. The person who is a minority in your organization already has two jobs: the job on their job description and the job of representing their race or ethnicity. If that person is a woman, she has a third job representing her gender. Adding the role of race expert or organizational change manager is too much. There is too much relational capital risked and spent when the work is led internally. Invite a qualified person to help you through the process.

A portion of your work is focused on divisions and preferences about worship style. Why is this a sticking point in the pursuit of a cross-cultural embodiment of the church?

From Outreach Magazine  The Best Way to Grow Your Church

Too often the economic golden rule is at work: “The person with the gold makes the rules.” Thus, our church’s style of worship often reflects the demographic that makes the church economically sustainable. This was what the “worship wars” of the ’90s were all about. A significant number of church leaders were concerned that if they moved toward a “contemporary” expression of worship, they might lose the big donors who preferred the “traditional” worship expression.

This same issue comes up with cross-cultural embodiment of worship. There might be legitimate concerns about the expression being authentic, but more often people who aren’t used to living a cross-cultural life experience discomfort and want to put on the brakes. If what attracted them to the church was comfortable spirituality, they may leave. (If they don’t leave, they might complain to the point where the leaders hope that they leave!)

Worship is not only expressive, but also formational. As leaders, we have to ask ourselves, How are we forming people? Are we forming people in consumer spirituality? Are we forming people to prefer others before themselves? Are we creating a church for the least of these or for our big givers? When we ask ourselves these questions with honesty and transparency, we allow space for the Holy Spirit to speak to us through a diverse group of brothers and sisters and hear things we wouldn’t normally hear. When we don’t ask these questions, we leave ourselves open to malformation according to our own cultural blind spots.

For more from David M. Bailey, visit Arrabon.com for training and consulting, and UrbanDoxology.com for worship and reconciliation.

Order The State of Pastors monograph »

Barna Group (Barna.com) is a visionary research and resource company located in Ventura, California. Started in 1984, the firm is widely considered to be a leading research organization focused on the intersection of faith and culture.