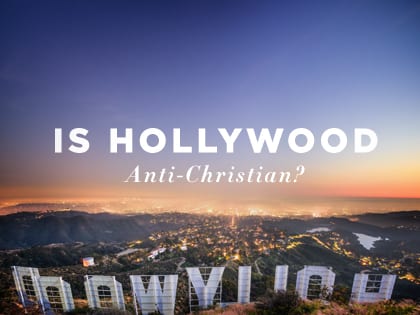 Phil Cooke: “To make a blanket statement that Hollywood is the enemy is a big mistake.”

I get asked (usually from Christian media) if I believe Hollywood is anti-Christian. I understand the question, because it’s pretty easy to see that Judeo-Christian values aren’t exactly the hot button these days in the movie and television industries. And yet, to make a blanket statement that Hollywood is the enemy is a big mistake. Recently, I discussed the issue with a major Christian media site, and here’s what I told them. I’d love to hear your comments about my answers.

What’s your response when you hear Christians complain that Hollywood is anti-Christian?

It certainly hasn’t been true in my experience. Obviously there are people in Hollywood who don’t like religion, just like there are attorneys, school teachers, plumbers and store clerks across the country who don’t like religion. But in my experience, the vast majority of producers, actors, filmmakers and studio executives in Hollywood are very open. In most cases (again, like the general culture) these men and women weren’t raised in Christian homes, so they’re largely ignorant of any knowledge about the Christian faith. But that doesn’t make them “anti-faith.” In fact, I’ve had some remarkable conversations with industry leaders about Christianity, and you’d be amazed at the number of highly placed entertainment and media professionals who are believers.

But what about specific examples of Hollywood being anti-faith?

I think in most cases, the idea that Hollywood is “anti-faith” is a gimmick used by some Christian organizations to raise money. It’s a well-used technique in fundraising to create an enemy so your followers will respond.

I also believe that some Christians can be too quick to use terms like “mockery” when movies don’t portray Bible stories accurately. Most filmmakers don’t believe the Bible, but that doesn’t mean they don’t see the value in its great stories. However, since they’re not believers, they don’t feel the loyalty to the story that we do, so as creative artists, they don’t see a problem deviating from the storyline. But it’s not about “mockery” or being “anti-faith.”

Until 2013, Hollywood rarely touched faith. TV still keeps an arm’s distance from religious topics. Why is this, especially in light of the success of shows like 7th Heaven?

To be honest, that program was popular an entire generation ago, so it’s not really relevant to the conversation. Tastes change, culture changes, trends change, people change—so you can’t really compare what was popular 20-plus years ago with what’s popular today.

Keep in mind that Hollywood is a business―not a religious organization, so their goal (like any other business) is to make a profit for their investors and shareholders. Creative people create based on what they know, and frankly, as I mentioned before, most Hollywood professionals simply didn’t grow up in Christian families, so to produce faith-based programming simply isn’t on their radar.

One important inroad I’ve made is to point out to studios that Hollywood bends over backwards to reach special interest groups of all kinds—like feminists, environmentalists, the gay community, the military, gamers, etc.—but by the numbers, Christians are the largest “special interest” group there is. And yet many in Hollywood don’t understand what makes us tick. There’s a handful of us in town trying to turn that around, and after years working in the industry, I can say that for the vast majority of cases, it’s simply a world they’ve never grown up in or encountered.

Is there anything Christians can do to improve the lack of faith-related programming in Hollywood (rather than simply complain)?

1. It’s my position that boycotts, petition drives, etc. are very damaging to our cause. If that worked, then why don’t missionaries do it? Why don’t missionaries surround a Third World village, hold up signs, call them names, and threaten to never do business with them? Boy, THAT would win them to Christ. Not!

What do missionaries do? They work from the inside, building relationships, earning trust and becoming one of them. Once they’ve earned the right to speak, that’s when change happens.

2. Let’s preview movies and tell Christians (especially families with kids) what’s in them. I’m all for reviews and recommendations that let people know what’s there so they can decide for themselves. Everyone has the right not to see a movie, but when it comes to major, orchestrated criticism, let’s actually see the movie before we launch a national campaign. I’m a firm believer that to criticize a movie, book, TV program or other endeavor in the media without actually seeing it is intellectually dishonest. When Christian leaders mount massive campaigns against movies they haven’t even seen, it really hurts our credibility outside the Christian bubble.

3. I’d like to see the Christian community criticize less and begin raising up our own filmmakers, writers and producers to go into the industry. Let’s focus less on making explicitly “Christian” films and more on getting Christian thinking into mainstream movies. Even with the success of a few movies like God’s Not Dead, they’re largely seen by the choir. That’s not influencing the culture. I’m talking about the same strategy the gay community used and it was brilliant. They helped find talented gay filmmakers, developed relationships with studios and TV networks, mentored them and helped fund their projects. And just look at the results. We’re actually in the early stages of that strategy with an organization we’ve launched called Influence Lab.

4. Finally (and here’s a novel idea), let’s pray for Hollywood. If we really believe that God answers prayer, what if we started encouraging Christians to pray for the most influential industry on the planet? What if we started praying for the thousands of dedicated believers working inside the industry every day? I think that would have far greater results than boycotts, petition drives and criticism. For help starting, check out The Hollywood Prayer Network.

What trends, if any, when it comes to film and TV content, are troubling to you (sex, violence, etc.)?

A very big issue for me is how technology has made pornography so readily available to children. It’s not just movies or TV, it’s video games, the internet and now mobile devices. I’m stunned at how few parents monitor their children’s computer use or use anti-porn filters on computers. I also encourage parents to never allow young people to have computers in their bedrooms. When our daughters were young, we kept all the computers out in the open where everyone could see what they were doing. The question is—what will a culture look like when boys have been raised with pornography so readily available? It will dramatically change their views and expectations of women, and we’re already seeing that evidence.

What has been the biggest lesson you’ve learned about faith in Hollywood?

Never be afraid to be a Christian in Hollywood. Trust me—there are folks out here who hug trees and worship rocks, so being a Christian isn’t as weird as some think. And if you want to make an impact, don’t lead with your faith. Lead with your talent: your acting, writing, directing or producing abilities. Once they notice and respect your talent, they’re much more willing to listen to anything else you have to say.