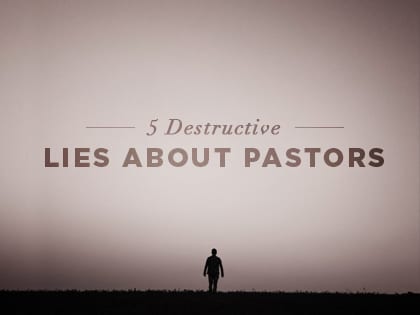 “It is totally wrong to make categorically false statements about pastors because you know a few negative examples.”

I’ve heard the lies too many times. It’s time for them to end.

The lies are about pastors and staff. They are false statements that seem to have some traction. They are diminishing the respect of pastors. And, for the most part, they are undeserved.

Sure, I know there are some bad apples in the bunch. Those bad examples make the news, the gossip groups, the blogs and social media. But those bad examples are the exception. They are not the norm.

It is ridiculous to assume an entire family line is bad because one or a few of the family members brought shame to themselves.

It is absurd to state that an entire race or ethnic group is bad because of a few bad exceptions.

And it is totally wrong to make categorically false statements about pastors because you know a few negative examples.

Please, stop the lies. Here are five of the most common ones:

Are you kidding? Have you truly seen the financial struggles of most pastors? Have you ever seen a pastor purchase a car, only to be castigated by a church member who decides the pastor is making too much? Most pastors could make a lot more money in another profession with a lot less stress.

Yes, there are some church members who really believe a pastor works about 10 hours a week. I challenge those members to look at the lives of pastors. Look at how pastors are on 24/7 call. See the pastor called back from vacation to do a funeral. Wake up with the pastor who was at the hospital all night with a family whose child was in an auto accident. See how long it takes to prepare a good sermon. Look at the total expectations of pastors by church members.

From Outreach Magazine  When It Comes to Changing the Culture, The Church Needs a New Strategy

Lie No. 3: “Megachurch pastors don’t care about the members.”

Pastors of large churches and megachurches (over 2,000 in average worship attendance) are getting the brunt of these criticisms. The assumption is that large is bad and unloving. Here is the reality. A church of over 150 in attendance is a large church compared to most of the 350,000 churches in America. And even the pastor of a church of 150 cannot give ongoing personal attention to every member. Most large church and megachurch pastors do really love their flock.

Lie No. 4: “Pastors have adopted the CEO mentality.”

I’m not sure most of the critics even know what they mean by this barb. I guess it something like autocratic leadership (which is a bad CEO model itself). No, most pastors are servant leaders. Don’t assume they are dictators just because they demonstrate a modicum of leadership.

Lie No. 5: “Pastors only care about ‘nickels and noses.’”

I want my pastor to know how many people are present. I want my pastor to know the stewardship realities of my church. But that does not mean my pastor cares about numbers more than people. Critics often set concern about people in opposition to numerical awareness. They are not mutually exclusive. And most pastors love the Lord, their families and their church members before they ever think about the statistics of the week.

No pastor is perfect. And there are a few pastors who do indeed bring shame to the calling. Almost everyone knows such an example. But the great majority of pastors are dedicated, hardworking, and servant-minded.

From Outreach Magazine  2 Ways to Fuel Your Youth Ministry

It’s time to stop the lies.

Thom S. Rainer serves as president and CEO of LifeWay Christian Resources. Dr. Rainer can be found on Twitter (@ThomRainer) and at facebook.com/Thom.S.Rainer. This article was originally published at ThomRainer.com on Sept. 21, 2016.