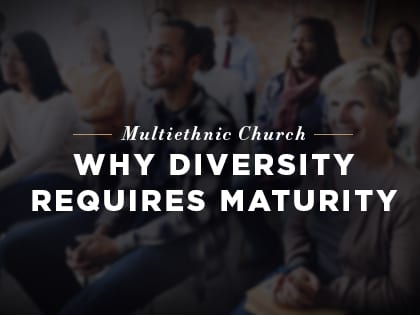 “If unity and diversity are perfected in the eternal church, we should be ever pursuing its perfection in the local church, as well.”

Recently I visited with a young, African-American pastor who, together with his wife, is planting a multiethnic church in the heart of Louisiana. Having launched the work in January 2016, they had come to our church seeking personal encouragement, relational connection and practical resources for the road ahead.

Among other things, he spoke well of his denomination in terms of its support to date, and of the need to help his people develop cross-cultural relationships. He asked how he might help his worship pastor overcome some of the most basic challenges of bringing diverse people together as one body before the throne of God. I was impressed by his intentionality and the initial diversity he has been able to attract, both to his core team and his membership.

On this point, however, something he mentioned caught my attention.

“Today, some pastors throw around the term ‘multiethnic’ in describing their churches, like spackle on a wall, hoping it sticks,” he said. “But then you visit their churches. Maybe there’s some diversity in the pews, but not in the pulpit or other responsible positions of authority. The structure remains unchanged: predominantly white or black, one way or another.”

There’s no question that he’s right: There are churches like this that exist and remain seemingly content with the status quo; and, likewise, pastors who are all-too-quick to claim their congregation is multiethnic for the sake of expediency.

For other churches, however, this is only a reflection of where they are in the moment and not at all where they intend to be in the future. Thus, some can be too quick to judge or criticize—even with the best of intentions—without taking into account how far a particular church may have come, or otherwise unaware of whether it has specific plans to soon diversify its senior leadership in order to effect structural change.

In any case, we should recognize that no church has arrived in this regard. Rather, like individuals, a local church, collectively, should be pursuing sanctification.

When pastors and theologians speak of sanctification they typically have the individual in mind. Rarely is the concept of sanctification, however, applied to the collective body. This is a mistake. For as with individuals, the Bible clearly reveals when and where the church will be perfected:

“After this I looked, and there before me was a great multitude that no one could count, from every nation, tribe, people and language, standing before the throne and before the Lamb. They were wearing white robes and were holding palm branches in their hands. And they cried out in a loud voice: ‘Salvation belongs to our God, who sits on the throne, and to the Lamb’” (Rev. 7:9-10).

In other words, if unity and diversity are perfected in the eternal church, we should be ever pursuing its perfection in the local church, as well. This involves more than mere diversity in the pews. It has to do with senior leadership and structural change, as well. Therefore, churches claiming to be “multiethnic” or “multicultural” should recognize that the faces of leadership speak louder than the terms used on a church website. Indeed, wherever diverse leaders are not empowered, the terms don’t stick.

Of course, it’s unrealistic to expect that any local church is now or will ever be perfected in this life where unity and diversity are concerned. Rather, at any given moment, each falls somewhere along the line of a continuum. On one end of the continuum, there are immature churches filled with people and leaders who want nothing to do with anyone that’s not like them. On the other end is like heaven, where diverse believers walk, work and worship God together as one body, as the eternal bride of Christ.

In its understanding, embrace and pursuit of corporate sanctification, where is your church at the moment?

As pastors, we not only have a responsibility to lead individuals toward sanctification, but entire churches in that direction, as well. Toward that end, consider the following four questions as you plan to move the church forward:

• What do we believe biblically about becoming a church for all people?
• What do we understand philosophically about how to go about it?
• What can we do practically to become a church that better reflects the community?
• What next steps will we take in pursuit of the dream, and when?

Mark DeYmaz (@MarkDeYmaz), an Outreach magazine contributing editor, is the founding pastor of the Mosaic Church of Central Arkansas, the co-founder and president of Mosaix Network. His latest book, re:MIX—Transitioning Your Church to Living Color was released in June.