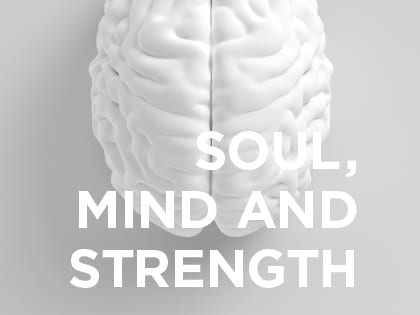 “We can’t ignore that our brains are inescapably connected to our spiritual experiences and ministry.”

The electrodes were cool against my skin, white wires trailing down, connecting my skull to the computer on the desk. I sat back in the chair, fidgeted, tried to analyze why I felt this nervous energy. After all, Josh was only going to look into my brain.

I was sitting in an old college friend’s counseling office, in a little business park in Vancouver, Washington. Josh, an early adopter of a new therapy modality called neurofeedback, had offered to show me his work firsthand. I jumped at the chance.

Josh treats brain and behavioral disorders by gently retraining neural pathways. Desired brain behaviors—many of them so basic as to be unconscious, are automatically rewarded by sensory stimuli, such as an enjoyable shift in the quality of a peaceful video playing on a screen nearby.

As I sat, hooked to the computer, quiet music came into crisp clarity for a moment, then faded, as if a child was playing with the stereo knobs.

“You’re controlling that,” Josh said, indicating some speakers sitting with a range of other media in the corner, “but you don’t know you are.” He pointed at a screen. “Did you see those colors brighten? That meant the left hemisphere of your brain communicated nicely with the right. Good job.”

I would have felt more accomplished if I had felt more responsible.

On a screen by Josh’s chair, a three-dimensional image unfolded itself infinitely, looking like a topographic map for a country with no horizon. Red peaks rose and fell hypnotically, while blue ones echoed them to their right. They leaped in rhythm, little mountains eager to play. “Those are your Alpha waves,” Josh was saying, “and those are your Betas.” They climbed for a moment in unison. “See that? That’s your brain doing what we want—communicating efficiently to itself.” I liked that. “But in general, I’m curious about something here.” He peered at the screen. I turned closer to him, trying not to dislodge the wires along my brow.

“Your brain’s hemispheres aren’t working as well in tandem as I’d expect.”

My brain (and yours) consists of about three pounds of specialized cells, clumped in a wrinkled mass inside our skulls. Seen on its own, the organ is singularly underwhelming—like a fleshy shelled walnut, soft and helpless.

But that gray lump is a whole treasured universe unto itself. “The seat of intelligence,” the National Institute of Health gushes, “interpreter of the senses, initiator of body movement and controller of behavior. Lying in its bony shell and washed by protective fluid, the brain is the source of all the qualities that define our humanity … the crown jewel of the human body.”

Their effusiveness is justified. The gentle folds of the brain’s lobes and cortexes form a shifting labyrinth of neural pathways, holding the depth and height and breadth of our human experience. The wonder! All art passes through that lump of precious cells, all memory, all knowledge, all wisdom, every dream and love and hatred and tear and laugh. Through 100 billion neurons, firing in constant chemical barrage, we encounter our world.

Study of the brain has seen more advances in the past few decades than for millennia preceding it. We have technology to thank for that—the development of functional Magnetic Resonance Imaging (fMRI) in the early 1990s allowed us not only to view images of the inner brain, but the specific activities of brain function by its uptake of oxygen and glucose. When in use, the portions of our brains responsible for a given function—speech, tossing a football, recalling Grandma’s paprikash recipe—draw blood flow through something like a roaring carburetor, bathing the necessary portion of our neural network.

Since the fMRI, brain research has exploded, the findings of neuroscience slowly taken up by people doing integrative work in fields beyond the hard sciences, like business, education and athletics. Our brains are fearfully and wonderfully entangled with all our myriad mental, physical, relational, social and spiritual experiences.

Ministry and the Brain

Very few callings demand as much from a person (and his or her brain) as pastoral ministry. It’s holistically demanding—from the physical stamina needed for frequent 24/7 demands, to the disciplines of prayer and meditation, to navigating complex social situations, to the managerial and strategic aspects of organizational leadership. Sleep is interrupted, meals are skipped altogether or double-eaten in politeness to a host, conflicts are managed, hospitals are visited, confessions are heard, events planned—all under the shadow of the constant unexpected. It’s whole-body work. Stressful.

And the toll is serious. Clergy dropout rates, by some measures, are near 50 percent, and the various impacts of words like “burnout” or “exhaustion” can seem clinical until more specific numbers speak—clergy obesity about 10 percent higher than the U.S. national average, high blood pressure and asthma, 4 percent higher. Ten percent of clergy are clinically depressed (the average for the U.S. population is 6.7 percent).

Some internal denominational numbers are even bleaker: According to The New York Times, the Evangelical Lutheran Church in America found that 69 percent of its ministers reported being overweight, 64 percent said they had high blood pressure and 13 percent were on antidepressants. Many—if not all—of these are directly linked to the impact of stress on the mind and body. It’s a brain drain with serious implications for every part of the church.