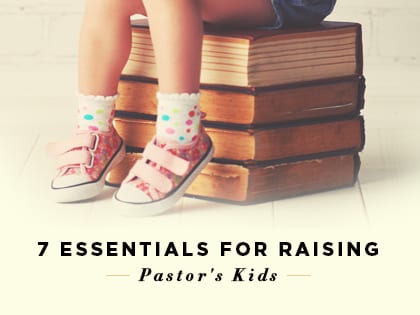 “The relationship you develop with your kids will build your platform to speak into their lives.”

You know you’ve been in church for a while if you’ve heard the acronym “P.K.” It’s an exclusive club whose membership requires one thing: You must have a parent who is pastor (unless you are the child of a missionary … then you’re an “M.K.”).

I wouldn’t say I’m a “true P.K.” because I didn’t become one until sixth grade. That’s when I was brought into the collective (Star Trek reference). I guess I’m what you would call a “hybrid.” I’ve lived in both worlds; seen both sides.

Now, being a pastor myself, my kids know nothing of the “other side,” but they have talked about it. It’s not that they don’t like being a P.K. But they recognize that they are seen and treated differently than non-P.K.s at church and at school.

Related: How to lead well—at home »

It was at a funeral of a pastor that caused my entire perspective on parenting to change.

A 45-year-old youth pastor had just passed away. It was sudden and unexpected. Tim was very loved and respected around the state, and the funeral was packed. The usual funeral elements were there. It was wonderful and meaningful. Then, Tim’s young-adult daughter got up to read a letter to her father. Within that letter, she rocked my pastoral and parental world. It went something like this:

“Dad, I remember teenagers would line up after youth service to talk to you. They would stand in line waiting their turn to share their heart with you. One Wednesday, I got in line because I needed to ask you something and I didn’t want to interrupt the others. What they had to say to you was important and I didn’t want to be rude.”

From Outreach Magazine  The Gospel on the Vegas Strip

“You then stopped mid-sentence and motioned for me to come forward. It was then you said, ‘You NEVER have to wait in line for me. You are the most important teenager in my life and in this church.’ Dad, that’s how you always made me feel.”

I hope my memory gave her words justice because they transformed me. I sat in a puddle of tears. Do my kids, Cammi and Ethan, feel like the most important children in my life? Has my parenting ever been second to my pastoring? We’ve pastored a few hundred kids. Anne and I consider them spiritual sons and daughters. But did my kids feel that they were held in higher regard than any one of them?

I want to encourage our pastors who are parents. I don’t want to heap on guilt that the Enemy would love to use to crush us. At the same time, if this article can be the same kind of wake-up call that funeral was to me, then it will be worth it.

1. They have more pressure on them than you realize.

I hear it from Cammi a lot. She has people apologize to her for what they do around her. She also gets left out of things (that aren’t sinful) that people assume she wouldn’t or couldn’t do because “her dad is a pastor.” She loves being a P.K.—but that doesn’t mean it doesn’t frustrate her. People say ridiculous and, in my opinion, stupid things to P.K.s:

“You should know better, you’re a P.K.”
“Does your dad know you do that?”
“I expect more of you because of your dad.”

From Outreach Magazine  How to Make Bible Reading a Daily Habit

I’m not sure what “normal” is, but let them be kids. I’m not saying to stop parenting. But they need to be allowed to be children and not have to live out a certain persona. Are we, as parents, putting more pressure on them because of what other people are going to think? Is our desire to impress others and/or protect the “office of the pastor” stronger than the desire to allow our children to be, well, children?

I’m not saying you have to coach all of their sports teams (even though it’s not a bad thing to be involved in your community … but that’s for another post). You don’t have to lead anything (in fact, I’d encourage you to serve instead of lead in your local schools). But your presence is powerful. Your children being a priority and feeling like a priority (there’s a difference) are crucial.

4. Only use them as a sermon illustration IF they give you permission.

I know a pastor who pays his kids $5 per illustration. My kids’ dad doesn’t hold to that policy. But the policy I do hold to is all about permission. I don’t share a story about them unless they know. I even check with them on details of the story. They don’t mind. Why? I don’t make fun of them. I don’t demean them. There’s nothing embarrassing. In fact, they love that they are a part of conveying the gospel. How did that happen? Permission paved the way.