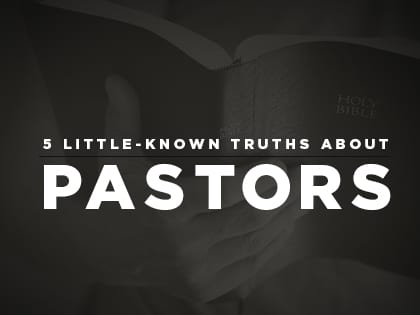 “The pastor is there to please God, not the congregation.”

“Shepherd the church of God which he purchased with his own blood” (Acts 20:28).

In my experience, most pastors hesitate to teach the biblical understanding of the role of pastors because to do so might sound self-serving, as though they were trying to carve out a bigger role for themselves in leading the church.

This is a serious error for which we are now paying the consequences, as many congregations are turning the minister into a hired hand, employing him as an errand boy or treating him as an executive brought in to lead their “country club.”

Pastor, preach the whole Word of God. Be bold in declaring its truth. Then, having done this, go forth and set new standards for humbly serving the congregation. Let them see you lead through serving and no one will ever mind calling you their pastor and following you.

However, lord it over them and dominate every decision and no one who knows his Bible will want to follow you.

What follows is the truth on the role of pastors as taught in Scripture. It’s not “all” the truth, for this is but one simple article. However, it cuts to the heart of the issue.

1. Pastors are called by God; they do not “volunteer.”

“Rise and stand on your feet; for I have appeared to you for this purpose, to make you a minister and a witness both of the things you have seen and the things which I will yet reveal to you” (Acts 26:16).

“The Holy Spirit said, ‘Now separate to me Barnabas and Saul for the work to which I have called them’” (Acts 13:2).

From Outreach Magazine  Evangelism in Leadership: As Easy as 5 Simple Steps

The work is impossible. The demands are incessant. The expectations are unending.

Only those called by God stick. Some of them even waver until they learn to do it right.

2. Pastors are overseers of the church, not hirelings.

“Be on guard for yourselves, and for all the flock, among whom the Holy Spirit has made you overseers … ” (Acts 20:28).

Pastors are plural. I don’t see anything in Scripture that puts one man in charge of God’s church. (By the way, in Acts 20 they are called both elders and pastors. It’s the same group.)

The church that sees itself as a country club, its leadership as the board of directors and the pastor as the hired executive answerable to the board, functions as unbiblical and detrimental to the work of the gospel, as does the operation of the local Jehovah’s Witnesses kingdom hall.

Unbiblical is unbiblical. Heresy is heresy.

You do not want a hireling leading your church. “The hireling flees … because he does not care about the sheep” (John 10:13).

A pastor friend once told his congregation: “Any church can fire me; but none can hire me.” Please do yourself and the kingdom a favor the next time you hear some church member refer to “hiring” a pastor. They are called, and never hired.

3. The pastor is accountable to God for the souls of his congregation.

“Obey your leaders, and submit to those who rule over you in the Lord, as those who will give account for your souls; let them do this with joy and not with grief, for that would not be profitable to you” (Hebrews 13:17).

From Outreach Magazine  Pastor, Creating a Generous Church Culture Starts With You

Hebrews 13:17 ranks among the scariest verses in the Bible. It informs church members that they must submit to their leaders while warning the leaders they will stand before God and give account for their members. That, as much as anything, is why pastors have to be called.

No one in his right mind would volunteer for such accountability.

Let the pastor take this to heart, and pray daily for his flock. Let him seek God’s will for the sermons. And let him do all in his capacity to see that each one is saved and becoming a healthy disciple of the Lord Jesus.

4. The pastor leads by serving, not by lording.

“Shepherd the flock of God which is among you, serving as overseers, not by compulsion but willingly, not for dishonest gain but eagerly; nor as being lords over those entrusted to you, but being examples to the flock” (1 Pet. 5:2-3).

Servant leadership is the biblical model. In the same way Scripture teaches that a wife should submit to her husband, but he himself should serve her and “give himself for her” (Eph. 5:22-29) rather than dominating her, the Bible teaches that pastors are overseers of the congregation and should be followed, but they themselves are to serve the people, not lord it over them.

Not nearly enough husbands or pastors get this distinction: They are to follow you, but you are to serve them.