Home Features 3 Critical Components of Leading Others Toward Spiritual Renewal 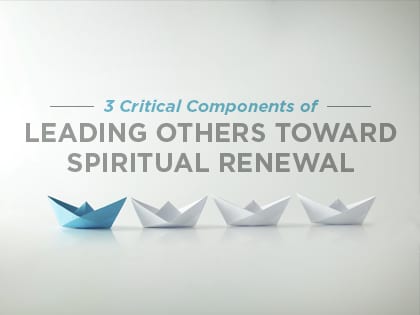 “Radical acceptance and compelling challenge—both are needed for people to find their way back to God.”

Dr. Rick Richardson of the Billy Graham Center for Evangelism attends Community Christian Church, which has 12 locations across the Chicagoland area. Recently, the church launched small groups based on Pastors Dave and Jon Ferguson’s book Finding Your Way Back to God (Multnomah Books, 2015)—a 2015 Outreach Resource of the Year. Rick served as a leader for one of the groups. Below, he shares about his experiences and provides some takeaways for those in church leadership.

I stood at the doorway to the upstairs room at the church, waiting to greet potential small group members for my Finding Your Way Back to God group. Five of us gathered at the table and ate a potluck meal. In all, there were 55 of us in six small groups. We were going on a journey together toward spiritual renewal—to find our way back to God.

One thing I love about the language of “finding our way back to God” is that it applies to just about anyone—whether they are far from God and finding their way for the first time, or whether they have been committed to Jesus for years and just need to find their way back once again.

During our first meeting, we watched a video teaching on the parable of the prodigal son by pastors and authors Dave and Jon Ferguson. The video included testimonies of people who had found their way back to God. One woman had been through two marriages and had kids before she found her way back to God. Another young man had grown up as a pastor’s kid, but left the church and had chosen a life of addiction and sexual exploration.

From Outreach Magazine  7 Issues That Make Leaders Want to Leave

By the second meeting our group members were sharing about their own struggles with God, times of doubt and experiences of brokenness in relationships. The honesty, sharing and authenticity were met with a deep acceptance and identification. This cultivated an atmosphere conducive for taking real steps toward Jesus.

By the fifth meeting, two people had decided to get baptized and three had decided to attend the next Alpha program (a 10-week course on the basics of Christianity). These were real steps that came out of a real experience of acceptance.

As I reflect upon my time in this wonderful group, let me share three takeaways from my experience and three questions for your church as you consider reaching out to those who are trying to find their way back to God.

First, does your church have opportunities for people to belong before they believe, and to find authentic community with others as they are headed toward spiritual renewal?

Finding Your Way Back to God groups were a perfect preparation for the longer and more time intensive commitment of Alpha, which often needs an on-ramp or feeder stream. These groups were a great example of an on-ramp because they gave people the opportunity to belong before they believed.

Second, does your church communicate both forgiveness for the prodigal and healing for the abused when you invite people to Jesus?

Not everybody has the story of the prodigal son as their blueprint for finding their way back to God. Even in the parable, the older son needs to find his way back to God just as much as the younger son does. Most of the members of my group identified more with the father who had been abused and rejected than they did with the son who had abused his privileges and walked away.

From Outreach Magazine  5 Ways the Online World Is Hurting Us

When acceptance is the foundation, challenge becomes the catalyst. We tend to err on one side or the other, either accepting without challenge (which can reinforce a self-absorbed dead end when it comes to growth) or giving a challenge before there is real acceptance (which can cause people to feel judged and shamed). Neither polarity expresses the kind of grace Jesus extended—a grace that will never let us go, but will also never be satisfied unless we are becoming who we were created to be. Which is your church better at—radical acceptance or compelling challenge? Both are needed for people to find their way back to God.