Home Features Is It Possible to Manipulate People Into the Kingdom? 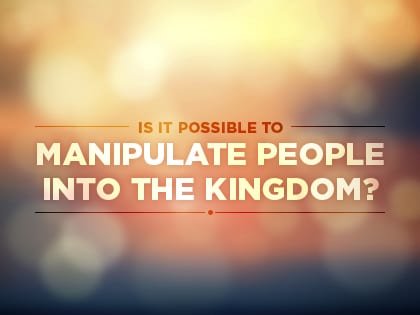 “Nowhere in Scripture are we commanded to ‘get people to pray the sinner’s prayer.’ We were told to make disciples.”

He commanded the church to make disciples. A disciple is something far different from a convert or a friend or decision. To be a disciple means a commitment for life.

You cannot sneak people into the kingdom.

A pastor I know had hundreds of cards printed up with the “sinner’s prayer.” He gave them to his members with instructions and a little training to “get people to pray this prayer.” His goal was 1,000 people each year “praying the sinner’s prayer.” By this plan, according to him, they were reaching people for Jesus and populating heaven with the born again.

It didn’t matter if those people never darkened the door of his or any church. So long as they invited Jesus into their hearts—which was the content and object of the prayer—nothing else mattered.

Except it doesn’t work that way.

Nowhere in Scripture are we commanded to “get people to pray the sinner’s prayer.” We were told to make disciples, and that is a far bigger business. It’s also harder, which accounts for our efforts to shortcut the process. We’re trying to go the Lord one better.

After all, if convincing people to “pray this prayer” gets them into heaven and out of harm’s way (i.e., hell), then haven’t we done a good thing? Answer: if it would, then we have. But if it works, wouldn’t the Lord have told us to do it that way?

We must be wary of trying to expedite the Lord’s methods.

I was a young minister, preparing to head to seminary, and so for a few months, served as assistant pastor at Central Baptist Church in Tarrant City, Alabama. I sat in the choir during a week of revival led by an evangelist whom I will not name.

From Outreach Magazine  David Gustafson: A Fresh Look at Evangelism—Part 1

He had a scheme to get people “down the aisles.” Each night, his sermon lasted only 15 minutes or so. Then, the invitation lasted another 15 to 20 minutes.

At the end of his sermon, the preacher asked everyone to bow their heads and close their eyes. Then, he spoke to those who wished to get to know the Lord better, or had a prayer request, or wanted to make some kind of decision. “Would you raise your hand?” he asked.

Then came the next step.

“All of you with your hand in the air, would you lift your head and look at me. Come on now, all of you. Lift your head. Look me in the eye. You can do this.”

After a bit, the third step.

“Now, as the choir sings and the pastor takes his place here in front, I want you to step out into the aisle and come forward, making that decision for Jesus. We have counselors here at the front to deal with you. Come on. Who will be first? Step forward now.”

That went on for a long period.

One would think that Scripture places a great value on raising one’s hand, opening one’s eyes and looking at the preacher, standing to one’s feet, and especially walking forward to the front. As though this proved something or guaranteed something.

The first time the preacher did that, I found it interesting. (Remember, I was 23 at the time and knew precious little about how these things should be done.) The next night, when he did the exact same thing, I found it slightly less so. And by the third and fourth nights and through the rest of the week, as the preacher repeated the process again and again, we all it burdensome and repetitive and manipulative.

Did anyone who went through his series of steps and ended up walking the aisle come to know Jesus and live forever? I hope so. But only God knows. If so, it was in spite of the preacher’s technique and not because of it.

Interestingly, the Gospels do not tell us how exactly to make a disciple.

There is no one biblical way with all the others being wrong. God uses any method he pleases.

He used a deacon in the desert when Philip talked to the eunuch of Ethiopia (Acts 8).

God used a woman with a terrible reputation in Sychar (John 4).

He used a preacher with an impromptu message on the Day of Pentecost (Acts 2).

Some will ask whether the Lord doesn’t also use “sinner’s prayer” printed on cards. My answer is two-fold. One, he can if he pleases. And two, we must give a thought to the hundreds and even thousands of people who are now walking around with a false sense of security because they “prayed that prayer.”

Our prayer ought always to be “Thy will be done.” Any method that is not in accordance with God’s will should be abandoned forever.